Review - Hot Nights with the Fireman by Lynne Silver ONE SPARK IS ALL IT TAKES

Everyone in Washington, DC, knows that when the heat is on, you call Valerie Wainright. This brilliant, brassy PR maven can spin any hot scandal, and she's never let a client ruffle her feathers. Yet when she agrees to teach DC's bravest how to handle a media frenzy, she faces an entirely different kind of fire. Keeping things all business and no pleasure is far harder than she expected.

After steamy photos ignite the Internet, firefighter Jason Moore instantly goes from hero to bad boy. While he couldn't care less about an online rep, he cares a lot about his job and saving lives. If Valerie can help clear his name, he'll do what she says-even if it means forcing himself to keep his hands off her. But beneath Valerie's cool cover, Jason feels a smoldering desire that lights his own. And this is one inferno he'll definitely want to stoke . . . 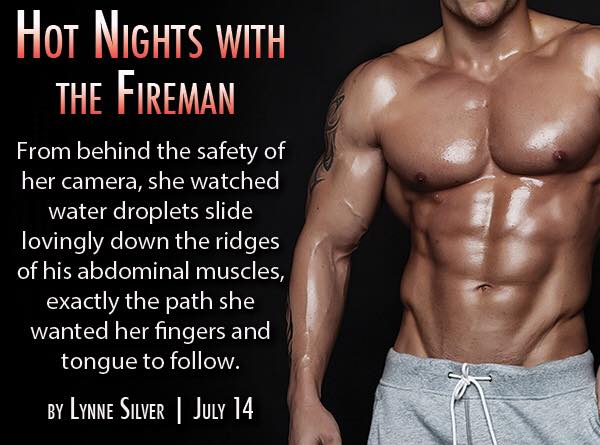 I have to admit, I might have a little thing for firemen. I love the work they do, and I love how sexy they can be. And then, there are the hoses...

This book was full of firefighter glory. Valerie is a PR worker trying to make partner with her company, and that means working to fix the local fire station’s public image after some racy pictures were leaked. The sexy Jason seems to be the main culprit, but everyone in this book gets to learn that nothing is as it seems...

Valerie has scars, physical and psychological. The extent of these scars remains hidden through most of the book, so I was nervous about their reveal. So often it's not nearly bad enough to justify the drama. This was not the case here, and my heart broke for Valerie and all she had suffered.

Jason isn't the playboy he appears to be, and is just such an honestly good guy. He doesn't want to have a fling; he wants a full relationship and everything that goes with it. He doesn't make the usual annoying mistakes that normally push the girl away. Their problems are deeper, and for once, pretty much entirely on the heroine’s side. This was refreshing as you get to experience her growth as a character and watch as she learns from her mistakes and is forced to eat her pride.

The name suggests that there should be hot nights, with a fireman. In this, it did not disappoint. There were many steamy, sexy, and oh, so hot nights with this fireman. I only managed to spend one night with him, sadly, as this was a hard one to put down.
~ Review by George