Cover Reveal - Have a Heart by Jodi Watters 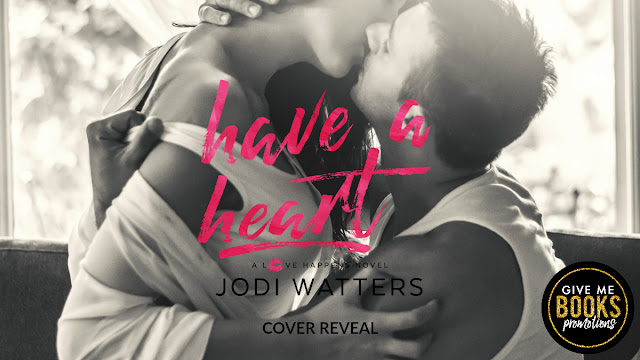 If he had one, she'd be the woman he'd give it to.

A runaway bride, searching for happily ever after.
A Navy SEAL, who doesn’t believe in such things.
A bar, in the middle of nowhere, and fate, who’s been awaiting this day.

Tessa
When I left my groom at the altar, I didn’t care where I went, or who I met along the way.
When I walked into a roadside bar in Nowhere, California, I wasn’t planning on staying.
When I sat down beside Jason Reynolds, I had no idea who he really was.
My world turned upside down.
Now all I want to do is save him.

Jason
I tried to ignore her. The beautiful train wreck who’d crashed my pity party.
I tried to fight temptation. Her sweet smile and smart mouth threatened my misery.
I tried to walk away. My blackened soul didn’t deserve her bright, hopeful light.
My team calls me Tin Man for good reason.
Love has no place in my life.


Some things in life were worth the wait.
The line for the tallest roller coaster at Six Flags. A Chanel handbag once it went on sale. The pizza delivery guy.
Jason Reynolds naked.
Tessa was three for four so far, but if his willingness to follow her into a purple motel room without a fight was any indication, she’d be averaging perfect come morning.
After his remarkably personal revelation, she was shocked there wasn’t a cloud of dust in his wake, his truck speeding down the highway, never to return.
A veteran—Special Forces, at that—voicing his concern over integrating back into society, potential PTSD, and what to do with skills that served him well in the military world but not so much in the civilian one, was tantamount to laying down arms.
She’d been surprised by his uncertainty. It was such a human condition from a guy who appeared… well, inhuman.
Physically, he was an imposing man. Tall, close to six-three, if she guessed, his hair as dark as his aura. And built, his body a supplement-free masterpiece people paid a certified trainer top dollar to achieve. Based on appearance and manner, he could carry the world’s population with one hand, using the other to fend off scores of enemies.
But beyond the corded muscle and bad attitude was simply a person, no different than any other. Not that he was keen to admit it.
Leading him by the hand, she stopped at her door to fish the key from her purse and he pressed into her from behind, surrounding her. The Tumbleweed was a ghost town this time of night, the long balcony lined with doors free of other guests.
Public, yet private.
Sweeping her hair aside, he growled against her ear. “This is a bad idea.” Then he nuzzled the sensitive rim. “Tell me to fuck off.”
He licked her lobe, a teaser of what was to come, and a full-body shiver raced through her. He groaned at her little shimmy and rocked his hips into her.
“You’re slumming it,” he murmured. “Go back to your almost perfect life.”
A courtesy warning she didn’t heed.
“There’s no tomorrow with me.” He bit the nape of her neck, then licked the sting. “I’m walking away from here.”
Rough stubble scraped her skin, the burn a reminder of his powerful masculinity.
“I’ll go back to my room and jerk off until I go blind. It’ll be in your best interest.”
Her pulse spiked at the visual, a whimper escaping. “Don’t you remember my kink? It wasn’t a joke. I wanna watch.”
“That would defeat the purpose.”
“Pretty please?” Turning around, she brushed her lips over his. “I’d let you watch me too.”
He groaned against her mouth but didn’t kiss her back. “I’m not gonna take it easy on you. You’ll get it how I wanna give it.”
“Mmm, fine by me.” Burying her face in his throat, she inhaled him. Musk and delicious man.
“Gentle isn’t in my vocabulary.”
Moisture flooded her. “If you’re trying to change my mind, it isn’t working.”
“You want candles and poetry, go find somebody else.”
Jesus, he wouldn’t give up. “I only want you.”
“And I only want you,” he breathed, dropping his forehead to her shoulder. “God help me, I only want you.”
She groaned at his tortured prayer, but his mouth covered hers, stopping any more she might say. Stopping any more he might say.
The glide of his lips stole her breath.
The rasp of his tongue erased the outside world.
His kiss was hot, wet, and methodical. Slow in speed but deep with desire, he pushed her against the door with more force than necessary given she was a willing participant. Sparks singed her nerves with every teasing dip and skillful lash of his tongue, and she craved that same touch lower. Much lower.
A need to be taken hard and fast consumed her. A need that was edged in fear.
He might be Jason, but he was still a stranger.
Sensing that fear, he lifted his mouth. “I might be rough, but I’m in control. If you say stop, I’ll stop. At any time.”
She nipped his bottom lip, voice shaky. “I’m not afraid of you.”
“You should be.” Shadows hid his face when he stepped back, putting physical inches between them that equaled emotional miles.
“I’m not and never will be. Get over it.” Fumbling with the key, she opened the door. “Did I tell you I’m wearing my favorite panties tonight?”
He growled.
It could have meant yes, could have meant no.
“You’ve made a wet mess in them,” she scolded. “I need you to come in and clean it up.”
There was a muffled groan and two seconds later, she was atop the dresser, Jason between her spread legs and the door ricocheting shut.
So that worked.

FREE for a limited time!

My love for steamy romance began when I was in junior high. A friend and I noticed a dumpster of discarded paperbacks behind our local dime store. Covers missing and each book split down the spine, I scanned the pages for any love or lust words—and curse words, too. From that point on, I scoured the public library and the paperback racks at every store, reading anything labeled romance. I said a tearfully grateful goodbye to Judy Bloom, and Jackie Collins began ruling my world.

I live with my high school sweetheart husband in the desert Southwest. Awesome in the winter, not so much in the summer.

My life long goals are to think before I speak, smile more and swear less, and actually weigh what my driver's license states I do.