Release Blitz - Take All of Me by Sienna Evans

Greyson
Never expected much out of life—Succeeded!
Poster boy for a brother; he claimed the badge, I embraced the bad.
My best friend’s sister is pure innocence, but somehow, I’m gonna claim Celeste Morgan.

Celeste
I’ve had enough of waiting for something, anything to happen with Greyson Michaels.
But he’s bound by a promise.
Though we aren’t little anymore.
And we don't need anyone’s approval.
We’re adults, free to make our own choices.
And I don’t see a single reason to not have Greyson Michaels take all of me!

But with the level of drama surrounding us, our story won’t ever be easy…

Seatbelt secure, I stepped hard on the peddle. The car lunged forward and the Kona Blue Mustang reached 60 miles per hour within seconds, and I continued to push the limits. I pressed the clutch to the floor and maneuvered the shifter. Instantly, the low rumble of the exhaust turned to a powerful roar. Bold lights and a vast skyline were blocked by high-rises, becoming blurred lines beyond the windshield. The closer I moved to my destination, the further I drifted from a world of darkness. With corruption looming behind me, I welcomed the light dangling in front of me.
Her light...
My flight got in late to JFK, so now I had to deal with a shitload of traffic heading into Midtown Tunnel. But then a black Yukon Denali drew down on my bumper and flashed its lights about ten times. I let the idiot have fun until we got out of there. From every angle, traffic held steady, but I couldn’t let other drivers keep me from getting to her. At 9:30 on a Friday night, I didn’t have time for this shit.
I caught a break and swerved out of the lane; the Denali followed, lights blinking like before. This was the shit, the childish shit that transferred from childhood to adulthood. And unfortunately, I knew the asshole: my brother, Detective Brendan Michaels.
Not now! Not today! I caressed the wheel, squeezing tighter than before. This was nonsense, but I wasn’t up for the bullshit tonight. So I flashed him off and kept going. Now wasn’t the time for complex family issues. Plotting out my route, I slowly began ramping up the speed.
A red SUV sat in the left lane, in front of me, while a shuttle limo tried to box me in on the right. Dropping my speed enough to force the asshole to pass, I shifted down and cut behind him, skipping over to the second lane in time to trap the idiot trailing me. This was the type of shit that always occurred whenever I made it to the city because he had connections to track me down once I entered his state and mostly importantly, enjoyed riding his younger brother. But I needed the next 2 or 3 hours, just for me and the girl that haunted my dreams.
Holding the wheel steady while keeping the pace, I said, “Call CeCe!” Saying her name nearly took my breath away. If nothing else, life thought me that first love spoiled a man for everyone else.
Thumbing the wheel and waiting to hear her shriek my name, I didn’t breathe. Honestly, I’ve faced off with some of the worse scum to walk this earth, yet she had the ability to crush me. The guys I went up against could only hurt the outer me; CeCe, on the other hand, could shred me from the inside out.
“Greyyy!” Her voice snapped me out of the daydream. “Greyyy!”
“Hey girl,” I muttered, scared like hell of sounding too anxious or desperate. I even sat up in the seat, gripping tighter on the wheel with both hands.
“Don’t tell me you’re not coming, Greyson! The last time you were in town, you promised every month. How long has it been?”
“Ce—“
“No, no you better not disappointment me!”
“I wouldn’t ever do that, CeCe.”
“Don’t patronize me, Greyson!”
“My flight was late, and I’m in traffic. Have you left home yet?” With each word, I tried like hell to slow the heartbeats.
“I’m already on my way,” she sang into the line and it took me back to when we were little kids. I could imagine her lips—the way they’d poke out, pointing at me. And when she’d tilt up her head to gaze into my eyes, looking me full on, pupils diving past the barriers most girls would be too afraid to challenge.
“I can pick you up. Need more time? Where—”
“No… No… And hell no! You’re meeting me, as planned. I need a friendly face. It’s been a long week, Grey. You owe me tonight ...” While she went on and on about my disappearing acts, I shot to the exit. Flooring the pedal, then quickly easing into a smooth stop at East 35th Street.
“Celeste, I don’t know what the hell you just said.”
She laughed and I could picture her shaking her head, swooping her long, blonde hair from shoulder to shoulder in a flirty way. I know this girl; shit, I’ve known this girl since her arguments were nothing more than whiny sentences. I’ve known her since those big, blue eyes were even bigger; when her nosey, little ass would come all the way over to my parent’s house, up the street, just to find out what I was doing so she could have something incriminating over my head at any given time. I’ve always known her likes and dislikes, even more than she’d admit to herself even.
That’s the girl I fell for.
I don’t know exactly when it happened, but it did. I fell in love with my best friend’s sister, and I don’t know how to turn off the feelings because something inside of me wanted to go against a childish promise and make her mine. Ours might’ve been a perfect love, if we were different people—if she wasn’t his sister and I wasn’t the man I’d grown into.

Sienna Evans is a mother of two young men, lover of an incredible alpha male and writer of amazing stories with deeply passionate characters. She loves toy dogs with attitudes because she has a belief that good things come in small packages. Don't miss out on the Sienna Evans experience. 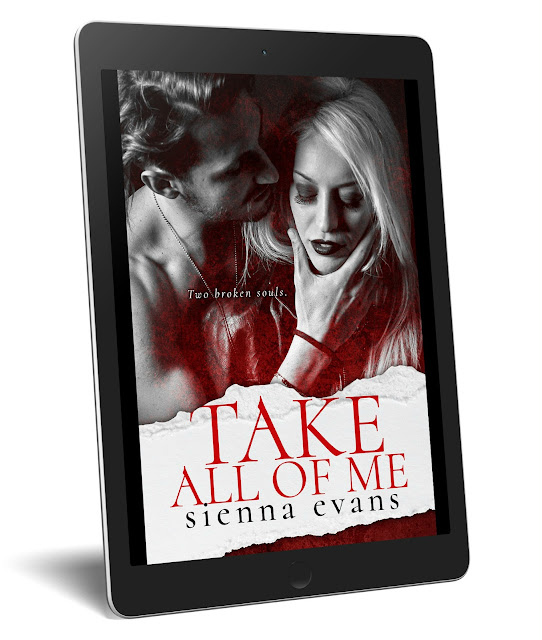 Email ThisBlogThis!Share to TwitterShare to FacebookShare to Pinterest
Labels: Release Blitz, Sienna Evans, Take All of Me, The Takers Series