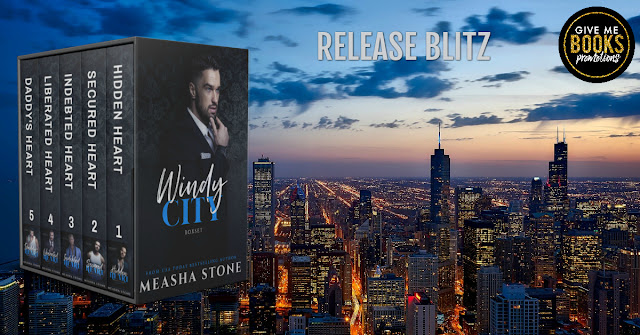 Five friends, one city- unlimited chances for love.  Join Jessica, Kelly, Alex, Erin and Ryder as they find their happily ever afters in this five book series. Friends to lovers, forbidden fruit, knight in shining armor— this series has it all!

Each book is completely stand alone.

Hidden Heart
Jessica has counted herself out of the rat race of love. She’s content to keep herself securely fashioned in her steady box. Safe job, great friends, and no romance. But when she meets Royce, he threatens to blow a hole through the thick wall she’s hidden herself behind. He’s determined to break through and capture her hidden heart.

Secured Heart
Kelly has been waiting for her knight in shining armor to ride in on his white horse and rescue her from her ordinary life. But he’s taking his sweet time. Taking matters into her own hands, she dives into a world she’s unprepared for. Kendrick has never seen a woman more impulsive than Kelly. She wants everything, and she wants it now. And damn if he doesn’t want to be the one to give it to her. But there’s more at play here than boy meets girl. Bad men linger in the shadows where fears are hidden and doubts hover. Can they pull together to secure a future or will the darkness tear them apart?

Indebted Heart
Alyssa Sanders is on her way to Chicago for a fresh start. No stranger to bad luck, she keeps her expectations low. What she’s not expecting is to find her severely dominant, extremely attractive boss is also the son of a close friend. Alyssa’s never been good at relationships. But Alex is easy to be with, even when he’s being overprotective and bossy.  So when he tells her he wants more than friendship can she put aside her fears of failures and give them a real try?

Liberated Heart
As a devoted fiance with a house in the 'burbs and friends she trusts with her life, Erin Stamper is living the dream. When her fiance announces he's in love with another woman, her world is shattered.  With so much sudden turmoil in her life, Erin decides to stop being the practical, dependable, and vanilla person she has always been and looks to explore this new world.

Dominant Bradley Sorenson promises to show her everything she wants to see, and more. But as she begins to find contentment in her true self, she receives a letter which starts a chain of blackmail that could ultimately end her new relationship.

Daddy’s Heart
Samantha’s starting over, this time in Chicago, and she needs a place to crash when she gets there. Luckily a family friend is hooking her up with a spare room.
The catch? The room is in the apartment of an insanely hot guy. To make matters worse, he has every mannerism of a Daddy Dom that sets her imagination ablaze.

Ryder doesn't mind giving up his spare room to help out a friend. But, his friend didn't explain how attractive Samantha was, or how easily Ryder would become consumed with her.
She's a friend of a friend- making her completely off limits.