Release Blitz - All She Never Wanted by Carolyn LaRoche 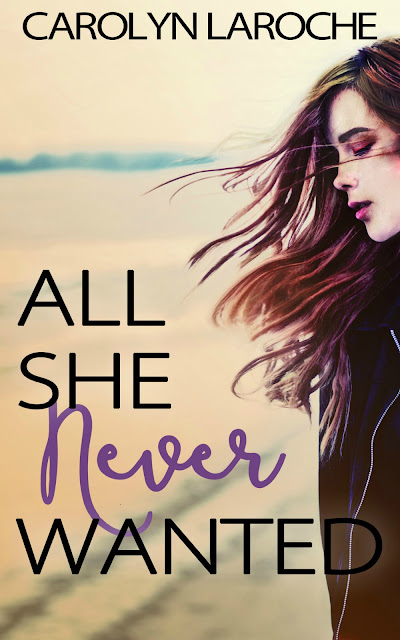 One moment changed everything…

Evie Ward had everything she’d ever dreamed of. An action-packed job where no two shifts were ever the same, the best friend a girl could ever want, and a fairy tale wedding just days away. Her life was absolutely perfect. Until one bullet—one horrible choice—left her with a broken heart and shattered dreams. Fleeing the city she loved and a lifetime of memories, Evie took a job in the Outer Banks of North Carolina in the hopes that the ocean air and fresh beaches could somehow restore her soul. Falling in love again wasn’t part of the plan.

Landon Reed was on top of the world. The money, the women, the status—he had it all until one bad decision nearly cost him his life. His father gave him three months to get his act together or be cut off from the family fortune and business. No house, no job and no money. His will and his patience are tested further when his father hires a nurse to whip him into shape. She may be little but she's mean and it looks like Landon has finally met his match.

With her shattered heart and his broken spirit, the road to recovery will be long. Can they help each other heal or will their fractured pasts be too much to overcome? 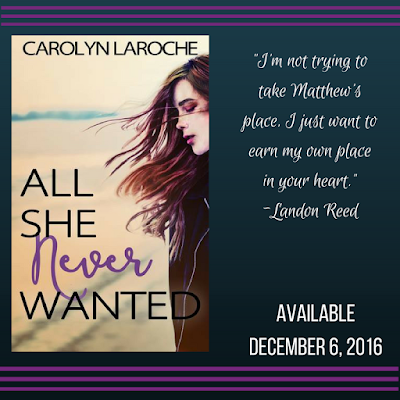 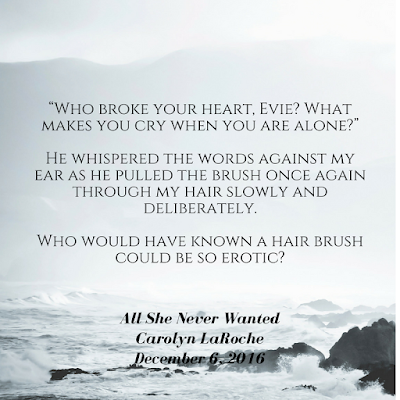 
It was almost three in the morning the last time I looked at the clock so when Amelia entered my room with a tray of food at half past seven, it took all of my self-restraint and the memory of the look on Walter’s face the night before to make me keep my mouth shut.

“Good morning, Landon!” Amelia hummed a little tune quietly as she set up the bedside table. “It’s a beautiful day, today. Perhaps you’d like to go down to the beach after your physical therapy appointment?”

I pulled the covers over my head. “I changed my mind. I’m not going to any appointment.”

“Come on, Landon. You can’t spend the rest of your life sitting here in this room.”

“You are going to physical therapy.” The covers disappeared from my face as I looked up into the smiling grey eyes of Amelia. “Rise and shine!”

“I’m not getting up.” I buried my head under my pillow.

Amelia walked toward the door. “Maybe you’ll have better luck with him.”

“Good morning, Mr. Reed. Do you plan to stay in bed all day?” A different voice, one thick with the distinctive accent of New York City replaced Amelia’s soft southern sound.

“Well, it’s all the same to me if you want to rot away in that bed. I get paid either way.” I heard soft footsteps cross the room toward the little sitting area.

Rolling over on my side, I shifted the pillow enough to peek out. From my vantage point, all I could see was a pair of canvas shoes. The television turned on. I heard her flip through channels, finally settling on that home improvement show with the twin brothers. Every woman I knew loved them.

“Nobody watches those stupid shows anymore.”

Either she didn’t hear me or she was ignoring me.

“Those shows are ridiculous.” I made sure to project my voice from under the pillow.

“No more ridiculous than a grown man hiding under a pillow and acting like a two year old.”

I threw the covers off and shot up to a sitting position, ignoring the burning pain in my leg. “What the fuck is your prob…” Holy shit. The woman sitting on the couch looking at the television and completely ignoring me wasn’t hideous or horrible. In fact, she was fucking hot. “Who the hell are you?” I knew exactly who she was.

She looked over at me, boredom in her expression, before returning her attention to the television. “The nurse your father hired. Who do you think I am?”

“I agree.” She flipped the channel to a news program and grimaced. “The way you’re acting, you need a nanny.”

“What’s that supposed to mean?” I turned so I could swing my legs over the side of the bed, the brace making my movements jerky not angry and pronounced like I’d intended.

“It means, you can’t even dress yourself so how can anyone expect you to do anything?”

I followed her glance down to my lap. “See something you like?

“Nope. I’m a nurse. I’ve seen worse. Of course, I’ve seen better too. Much better.” She clicked to another station. I could have sworn I saw her lip twitch as I growled over her insult.

She tossed the remote control on the coffee table and checked her watch. “You have ten minutes to get ready for physical therapy or I’m taking you the way you are.”

I pulled the sheet onto my lap and crossed my arms over my bare chest. “I already told Amelia, I’m not going.”

“You are going to get dressed.” She stood and looked me in the eye. “You’re down to nine minutes.”

“And just how do you expect me to get down all of those stairs?”

“The same way you got up them. Walter showed me the elevator.”

Damn it. I was hoping she hadn’t found that yet. “Are you planning to watch?”

“Watch what? There’s nothing to see.” She dropped her gaze to my lap and gave me a little smile that was way more taunting than friendly.

“Fine. Suit yourself.” I whipped the sheet back and reached for my wheelchair. Instead of turning away, she stayed right where she was with that little smile dancing around on her lips. With about as much grace as a bull in a china shop, I managed to get from the bed to the chair while she just stood there and watched.

“I thought you were supposed to be here to help me.”

“You didn’t say you needed my assistance.”

“Really? I had to ask? Isn’t that what you are here for?”

“Let’s get something straight, Mr. Reed.” She put her hands on her hips and glared at me. “I’m a trauma trained RN. I am not your maid or your gopher or any other thing. It is my job to get you back on your feet both literally and figuratively. I’ll handle your medical care and your personal care as needed but I am not at your beck and call.”

“Just get out of my way so I can get dressed.” I pushed past her to the large walk-in closet and started grabbing clothes. Dragging a pair of sweats, some boxer briefs and a t-shirt into the bathroom, I struggled my way into them. The doctors had promised me that things would get easier once the pain wasn’t so excruciating but my knee just refused to bend like it used to.

When I was done, I ran a comb through my wild hair, mostly so I won’t have to see the look on Amelia’s face when we leave the house.

“Come on, we’re going to be late!” The nurse called.

“I’m coming already!” I whipped open the bathroom door and scowled at her. “You never told me your name.”

She shrugged. “You never asked.”

She was fucking infuriating—despite the way her long brown hair tumbled in sexy waves over her shoulder from the pony tail it was secured in.

“That is my real name.” She stepped behind me and turned the wheel chair toward the door. She stopped and grabbed a pair of tennis shoes from the floor, placing them in my lap.

“I meant, is Evie short for something?”

“Yes.” She pushed the chair down the hall toward the door at the end and pressed the button for the small service elevator—the number one reason I had chosen the beach house as my home base after the accident.

“Are you going to tell me what it is?” The elevator opened and Evie pushed me inside.

“It’s none of your business. You can call me Evie or nurse. That’s all you need to know about me.”

“Anyone ever tell you that you can be a real bitch?”

“Honey, I grew up in New York. They teach a class on that in high school.”

The door opened at the ground level. Evie pushed me out of the elevator and down the ramp Walter had constructed to get me in and out of the house.

“I’m going out on a limb here but I bet you aced that class.”
“You’re smarter than you look, Mr. Reed.”

Carolyn LaRoche grew up in snow country but fled the cold and ice several years ago. She now lives near the beach with her husband and their two sons. She’s been known to lug her laptop to the baseball fields and keeps a notebook by her bed to jot down the next big story idea in the wee hours of the night. 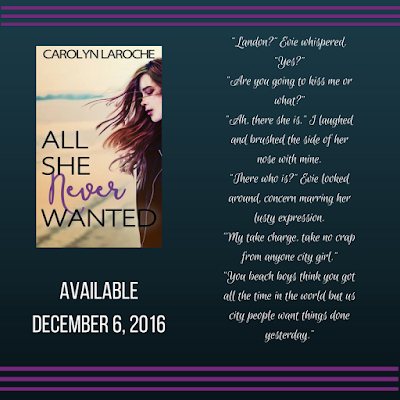