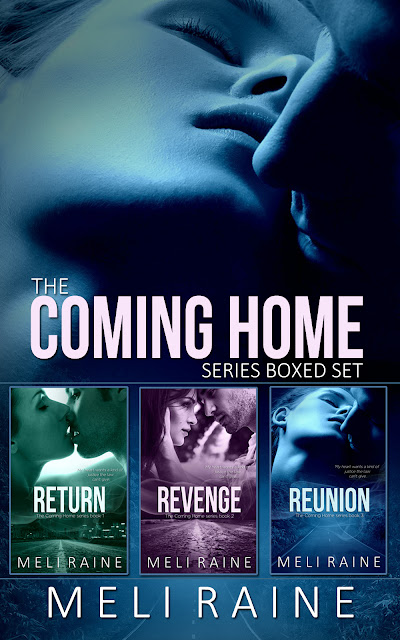 
When a mysterious job offer brings Carrie Myerson back to the town where her father was set up for a federal crime, she returns—to face a past more dangerous than she ever imagined.

And a love more passionate than she ever dreamed.

Drug crimes, kidnappings, set-ups and betrayal all unfold as Carrie and her ex-boyfriend, local police officer Mark Paulson, untangle the complicated web of deceit at the heart of her past.

Nothing is what it seems.

This boxed set includes all three books in the Coming Home series:

I can’t look. I just...can’t. Too many memories are in that face. That rugged, handsome face. My heart jumps up like an excited puppy, wagging in my chest, eager to be acknowledged and touched. The rest of me shoves it down.

Officer Mark Paulson stands in front of me in uniform, soaking wet, his hat making the rain fall in streaks in front of him. The curtain of water catches my eye. It’s easier to watch it than to stare at him. If I did stare, though, I know what I would see.

Broad shoulders under that crisp black uniform shirt. A thin scar running under his jaw, where he was knifed in a fight when he did a tour in Afghanistan. Wet, blonde hair I used to love to stroke. Gentle hands that once cupped my face. Eyes that could draw me in with a hot breath. The tender taste of lips meant only for me.

He speaks, pulling me out of the memory. Stop it, Carrie, I think. Stop with the dreams you destroyed.

“You okay?” he asks, looking around swiftly. He’s worried. That’s really touching. It’s nice to know he cares. Three years is long enough for him to stop hating me, right?

And I know he hates me.

He has to. I disappeared one day and never said goodbye to him. When you do that to someone, they tend to really resent it. Especially if they love you.

He thumps his hand on the car door. “She’s still around, huh?” I know he means the car, but it feels like a dig. Like he’s cutting into me for leaving.

If he’s still hurt, that means the feelings haven’t faded, and if his feelings are still that strong, then mine make more sense. I thought when I left town I would shed so much damage and hurt. Because leaving town meant I could leave behind so much pain.

But leaving Mark? That meant the pain came with me.

I start to shiver. It’s not from the cold and the rain. Those arms. The rain drops gather and ripple down his taut muscles, dotted with a sprinkling of dark hair. I remember when I was in those arms.

I remember every single time he touched me.

He looks like he’s vibrating. Mark leans forward and puts his hands on the edge of the kitchen table. His fingertips are white. The cords in the back of his hands stand out. His veins bulge. His chest rises and falls, heavy and hard, his pecs straining against the thin, beige fabric of his shirt as he stares at me.

The look he gives me makes me want to hug him and flee from him at the same time.

I can’t believe this is happening.

“Since four years ago.”

“Four what?” My voice rises with shock. What is Mark saying? What does he mean? He’s been a...huh?

“Four years. I got back from Afghanistan and my special forces training made me a candidate, so—”

“No.” I laugh, a barking sound that feels unreal. All of this is surreal, so why shouldn’t my laughter join in? This is absurd. “You’re a police officer.”

I knew he’d served in Afghanistan. He’d mentioned it, briefly, with a lot of pain and a brooding look. I’d stopped asking more details. It seemed like an off-limits topic back then.

“I’m afraid yes, Carrie. I’ve never been a true police officer. I mean, I am...I have all the legal clearances and the—never mind.”

I’ve never heard Mark ramble nervously. There’s a cuteness to it, like an awkward teen boy trying to talk to a girl.

Except this isn’t a teen boy. This is the man who got my father arrested, who also knows who stole my best friend, and who is standing before me telling me that everything I knew about him was a lie.

“Our entire relationship was fake,” I whisper.

“God, no,” he hisses, his eyes gleaming in the light as he gives me a savage look. “You were the only real part of my entire life here, Carrie.” The way the light bounces off his face makes me want to weep. His eyes, his skin, the way his jaw muscles fold and grind. The sheer power of his emotions feel like heat waves radiating toward me.

I go numb. My ears ring. My eyes blink over and over. My body feels like it’s hurtling through space and time without any control.

My heart is along for the ride.

I toss his badge on the table. It skitters and slides off the edge, bouncing on his foot. I reach for the doorknob to the kitchen door, shaking so hard my teeth start to chatter. I’m not cold. I open the door and look back at him.

His head is bent down, fingers gone a strange shade of white from gripping the table so hard. His hair is longer than usual and covers his forehead. I can’t see his eyes. His entire body is rigid with tension. Every muscle swells. His arms look like carved wood. If we were in any other situation I’d admire him. Take him in with my eyes.

Right now, though, isn’t that time. It’s like something between us just died. How many lies were in my life that I didn’t know about? How many truths that I believe aren’t really true? How could I give my heart to Mark so long ago only to be brutally betrayed?

“Don’t go,” he says. Begs. Pleads. He doesn’t look up, though. The words are so desperate that he doesn’t have to. I know what I will see in his eyes if he looks at me.

“Give me a reason to stay,” I whisper before I can stop myself.

My heart feels like it’s resting under my tongue and beating a thousand times a minute. I frantically clear the web from my face and force myself to stay in place. I’m sure there are spiders and probably mice down here. Maybe worse. I’ve never heard of rats in the old bar, but you never know.

None of that matters right now.

I make myself take a step away from Amy and toward the dim light. One step. I stop.

I can do it again.

Ten steps later I find myself off balance. The light isn’t growing any brighter. It’s just a vague, brownish light that I start to think is in my imagination. Maybe I’m going crazy and hallucinating this.

The ground becomes soft, then hard again. I backtrack, shuffling my toes on the ground.

Yes. There’s a divot. A soft spot, but it’s not dirt. More like a rubbery section.

I start to pitch to the left and reach my hand out. It touches wood. Ah, that’s right. The shelving along the walls. I’d forgotten about that. My finger cracks as it strikes a piece of wood, but at least I know where I am. Pain radiates from my finger. I keep walking.

My hand reaches the end of the shelves and just touches the concrete wall. Every foot or so there’s a small indent. The cement blocks are stacked on each other down here for the foundation. I’m feeling the groove where they separate.

And then I hit something made of metal. The cold, stark difference between the cement blocks and the steel makes me squeal. I go quiet, then hear a rustling sound. It’s tiny. It’s coming from in front of me.

Then I hear the unmistakeable sound of a mouse squeaking.

I go into instant panic mode. My eyes widen, desperate to see where I am so I can defend myself. I’m terrified of mice. Have been since I was little. The spider web earlier was freaky enough. A live mouse will make my blood burn and I’ll faint.

Dad used to tease me about my fear. Dad isn’t here. No one is here other than Amy, and I’m the strong one now. I’m her only hope.

I’m my only hope.

An ache for Mark hits me square between the breasts, like an arrow shot through the bone. I’ve been on my own for a very long time. The last three years were all about helping to get my dad exonerated. I know what it means to be completely on your own.

To have no one to lean on.

This is a completely different kind of aloneness.

a Rafflecopter giveaway
Posted by Give Me Books at 11:29 am