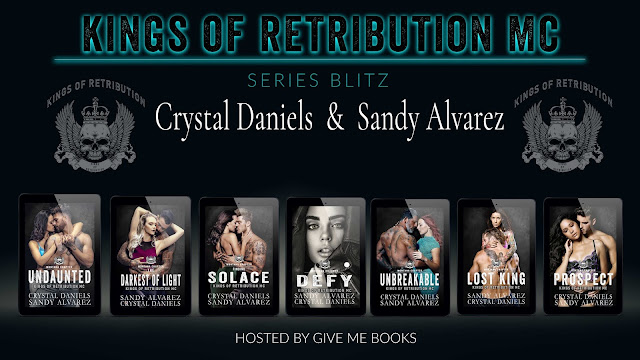 Series: Kings of Retribution MC Montana
Authors: Sandy Alvarez & Crystal Daniels
Genre: MC Romance
SERIES BLURB
Take a ride with the sexy bikers of The Kings of Retribution MC, and the strong, sassy women who bring them to their knees.
Seven stories filled with grit, suspense, and loyalty.
Family isn't always by blood. Family is who you are willing to bleed for. 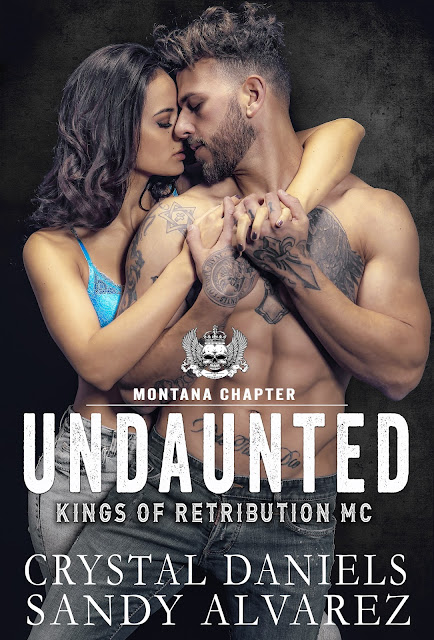 LIES WILL BE TOLD, SECRETS WILL BE REVEALED, AND WHAT WAS ONCE LOST WILL BE FOUND.
As the VP of Kings of Retribution MC, Logan lives and breathes club life. After suffering the loss of two women in his life, he grew cold and indifferent to the idea of love. Logan thought he didn't need to trust or love anyone again because he has seen the aftermath it can leave in its quake.
The last thing Logan was looking for is someone to fill the void.
Until-Bella Jameson
Struggling to keep her head above water, Bella’s only concern is taking care of her sister. The last thing she expected was to fall in love with the tattooed biker, Logan Kane. With evil hiding in the shadows, Bella had no idea of the danger her and Alba were about to face. 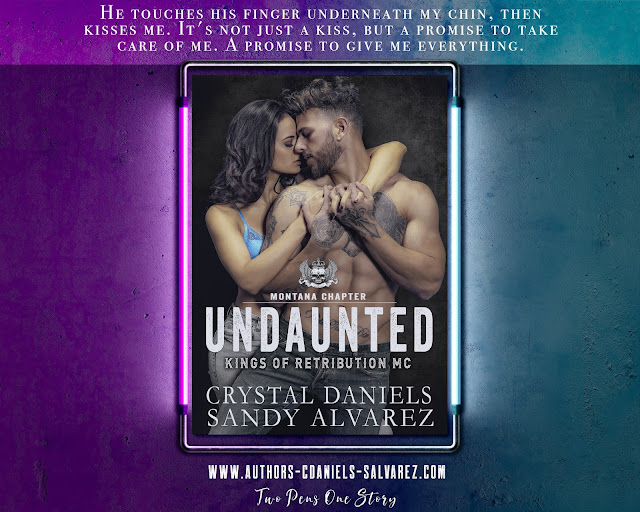 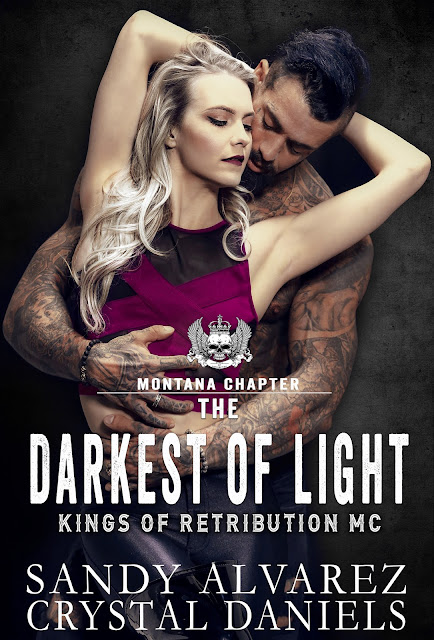 THE DARKEST OF LIGHT
As a young boy, Gabriel Martinez had his family-his entire life ripped away from him.
Revenge and indignation became his means of survival.
Several years later, a series of events led him to his new family, The Kings of Retribution MC, where he meets Alba Jameson.
Heartbreak being the final push, Alba chooses the life her sister worked so hard to give her by going off to college.
While trying to bury her feelings for Gabriel, she finds herself faced with the unexpected. Finding strength and courage she starts to pave her own path in life, until a faceless threat sends her home.
ADD TO GOODREADS 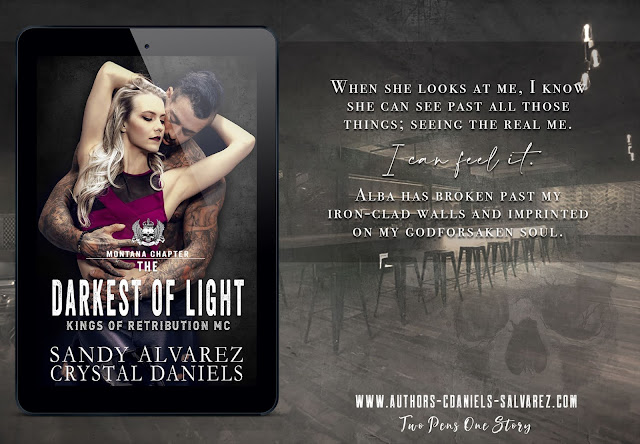 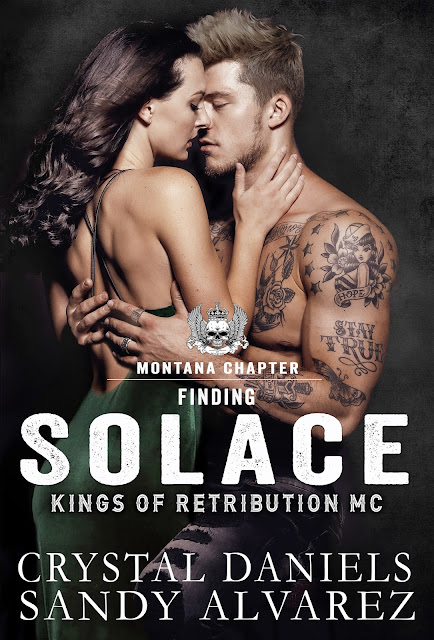 FINDING SOLACE
A moment is all it takes to change your life forever.
Reid Carter—Road Captain for The Kings of Retribution MC. He was born into the life. A world where you live and play by your own rules.
Tragedy strikes, taking the life of his younger brother Noah leaving him to pick up the broken pieces. Four years later he still wanders through his existence bitter and jaded by the hand he was dealt.
Until Mila and her daughter walk into his life making him feel whole again.
Single mother Mila Vaughn knows what it's like to struggle every day. Returning to Polson, the only place she truly felt at peace—Experienced love, she makes a home for herself and her daughter and fulfills her dream of becoming a nurse.
When her skills place her into the arms of outlaw biker Reid Carter; sheltering her heart from him proves more complicated than Mila prepared herself for. Chaos finds its way to their hometown; Reid will stop at nothing to protect the woman he wants and his future.
ADD TO GOODREADS 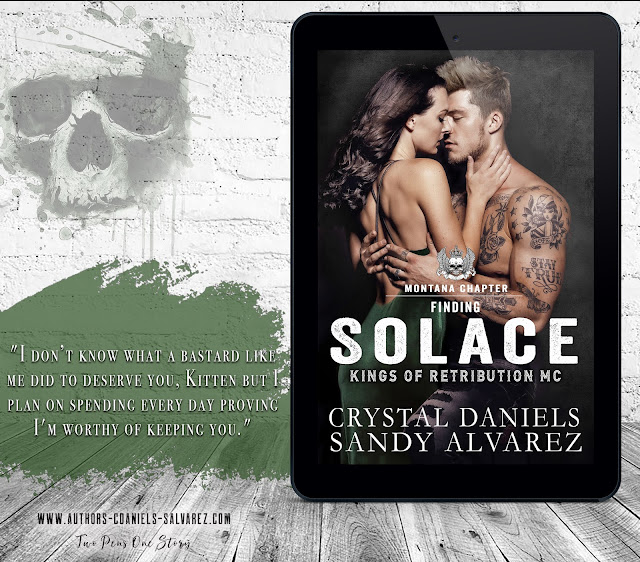 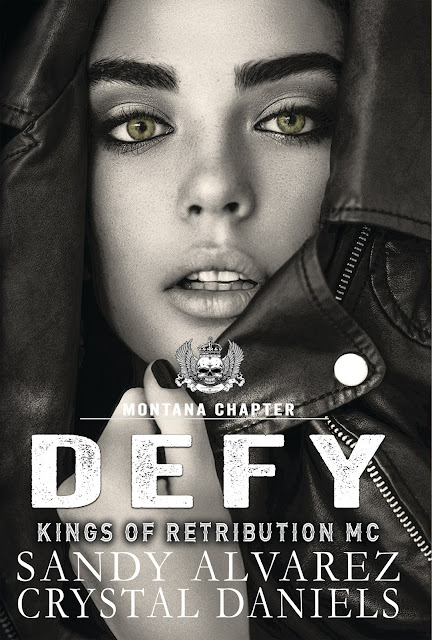 DEFY
HE SMALLEST OF MIRACLES CAN HAVE THE BIGGEST IMPACT
Defying everything life has thrown at them Logan and Bella's love is unwavering and stronger than ever.
They have everything…almost.
Both long for more; Dream of creating a family of their own.
Sometimes their smiles and laughter are a mask-hiding struggle, heartbreak, and pain.
Logan and Bella's story comes full circle when family and friends unite.
Giving them hope and proving the true meaning of undaunted.
ADD TO GOODREADS 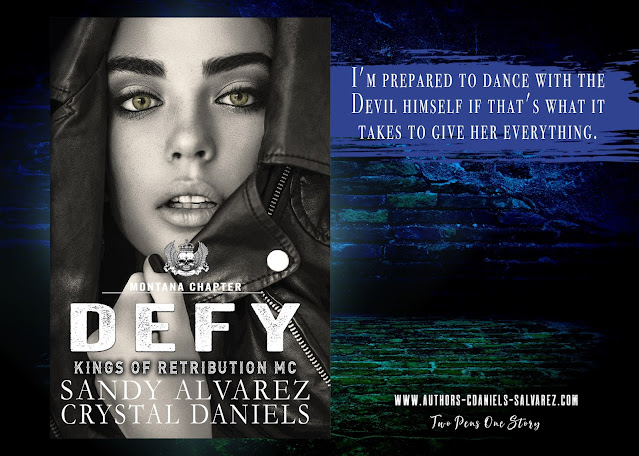 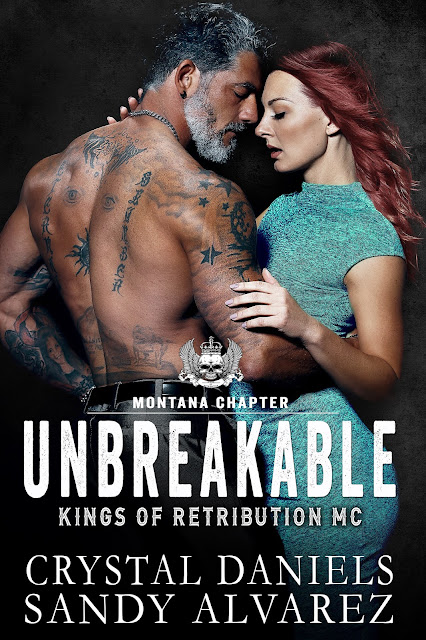 UNBREAKABLE
Fear makes us stronger and we become Unbreakable.
As the President of The Kings of Retribution MC, Jake Delane has dedicated his life to his family and watched his Club flourish. Seeing his brothers find strong women to stand at their sides unearthed buried feelings of loss, making the idea of never finding love again more absolute. Until a beautiful, and fierce redhead moved to town. Making Grace his became Jake’s mission. Loving her became his reason to breathe.
Hiding from her past, Grace finds refuge in the small town of Polson. As time passes, the secrets she keeps hidden become a necessary burden she must carry to protect the most important person in her life. When she finds herself falling in love with the President of the local MC, Grace does the only thing she can; She runs.
ADD TO GOODREADS 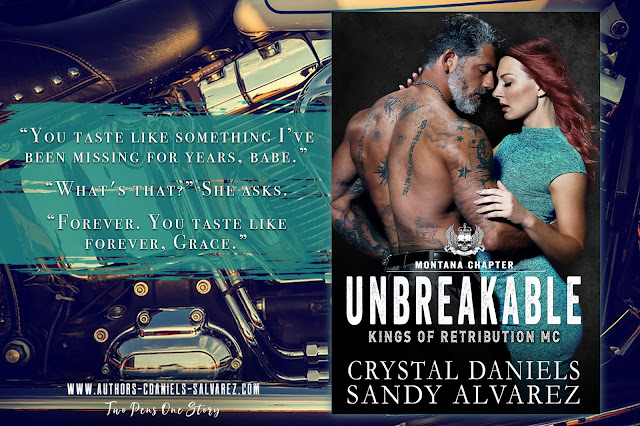 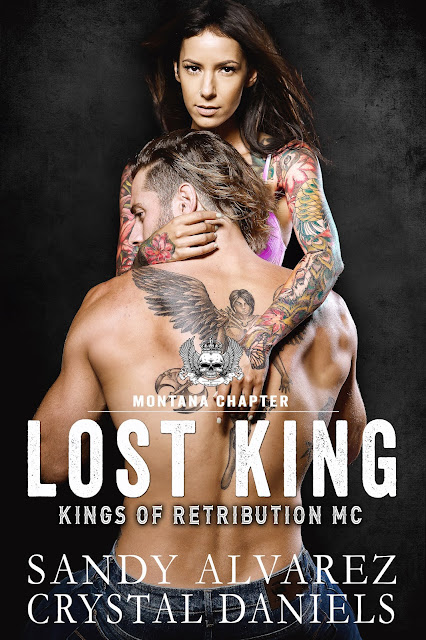 LOST KING
The funny thing about fate—about life, is you never know what the next day holds. Live with no regrets.
Quinn Beckett, Sergeant at Arms for the Kings of Retribution MC knows life is all about what you make of it. He has dedicated years to his club, his family, his community and the members he calls his brothers. For Quinn, he couldn’t imagine life getting much better.
Until a chance meeting a couple of years ago with a bright, attractive doctor altered his course in life. She became his only desire—his obsession.
Quinn wanted nothing more than to make Emerson his.
To outsiders Emerson Evans had all the things in life you could ever hope for; family, friends and a great career, but what they didn’t know was she wasn’t happy. All her life she chased dreams—dreams that were only partly her own. Being a doctor means everything to her, but she finds herself longing for more out of life.
Including wanting a sexy, long-haired biker, who happens to be part of the local MC.
The very Club that fate decided was to be a part of her life.
She could never have foreseen that giving her heart away and loving a man so fiercely would be the source of strength she would lean on when the unexpected happens.
ADD TO GOODREADS 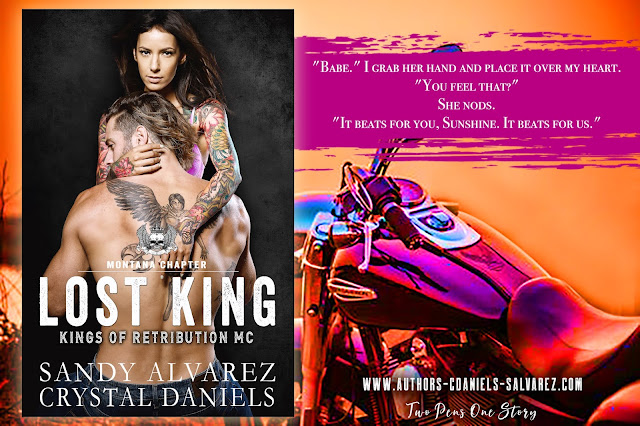 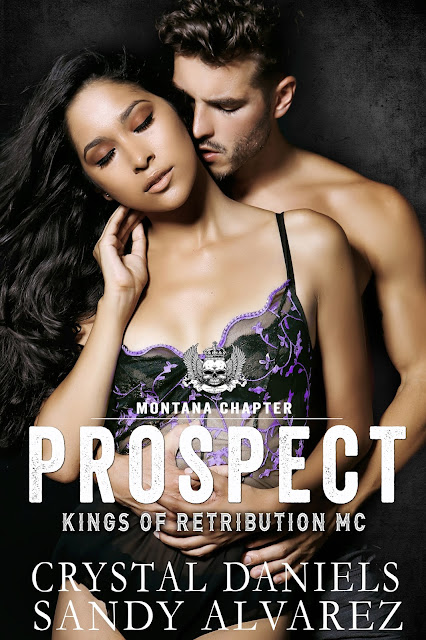 PROSPECT
Family isn't always by blood. Family is who you are willing to bleed for.
Refusing to yield to his father's will and expectations to one day take the reins of the family business, Sam McGregor leaves his home in Texas.
Fate leads him to the small town of Polson Montana, home to the Kings of Retribution MC, where he starts over and meets Sofia Torres.
Sofia's fate was sealed the moment her father committed a crime against an outlaw MC. Strength and determination drove her will to survive the torment she endured at the ruthless hands of the Los Demonios.
Now, with her past behind her, Sophia has been building a life in Polson with her new family.
She never expected to feel anything for a man—until Sam. He evokes feelings she finds herself wanting to explore.
Sofia's strength is tested once more when her life is threatened.
Standing with his chosen family, Sam vows to get her back; proving he will stop at nothing to bring her home.
ADD TO GOODREADS 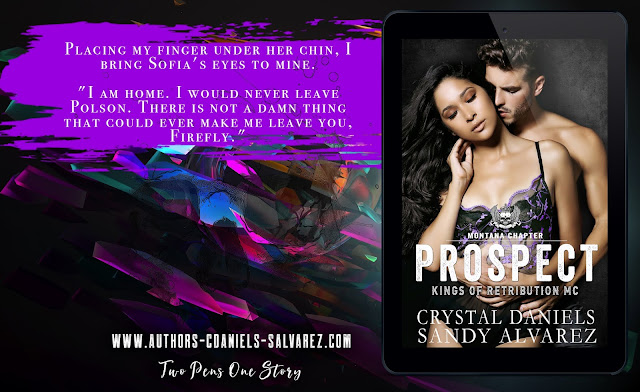 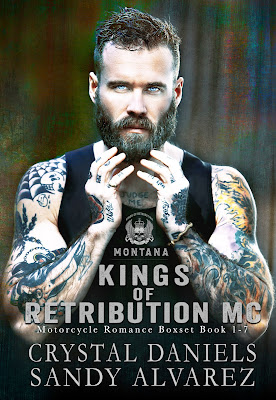 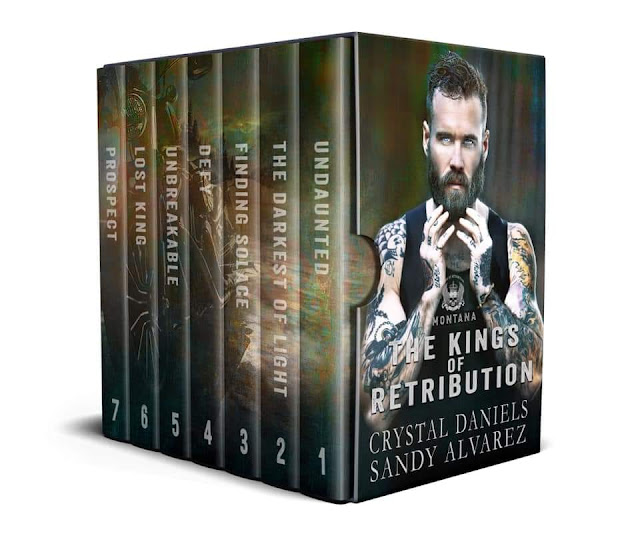 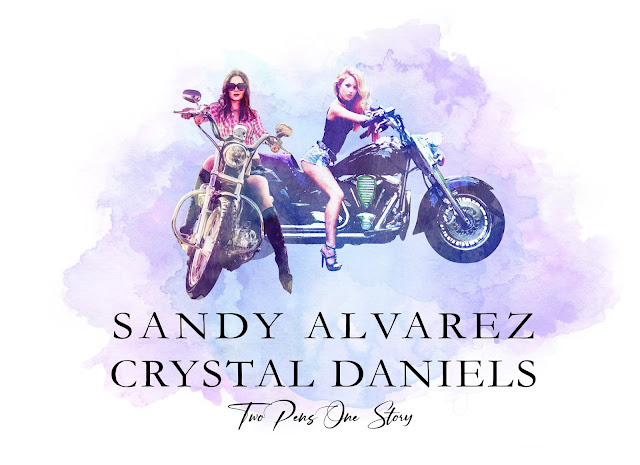