Release Blitz - Faking It with the Frenemy by Nadia Lee 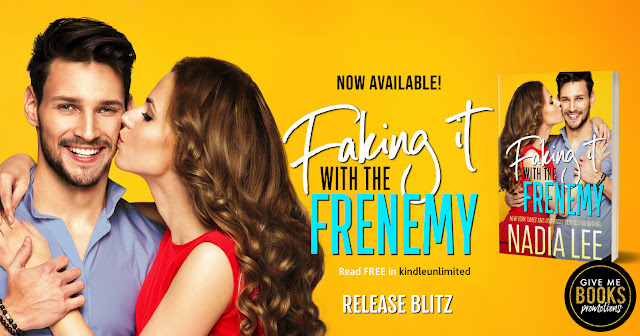 Until today, I never had to fake anything with Wyatt Westland—owner of a demon cat and my high school sweetheart-turned-nemesis-turned-billionaire tech genius. But I wouldn't be here by his side right now if I could've found him a date.

I swore I'd never let myself get involved with Wyatt again after he broke my heart all those years ago, but he moved in next door with his adorable daughter. And the sexy single dad vibe he has going on began to thaw my inner ice queen—the one I perfected just for him.

Then my eccentric boss asked me to find Wyatt a date to his ex-wife's wedding. My boss even put a cherry on top of a huge bonus, and I couldn't resist. Of course, not a single one of the heiresses I set Wyatt up with worked. I'm convinced he ruined each date on purpose, leaving me with no choice but to step up and stand in as his date myself.

How hard can it be to fake it for just one day, even if every moment reminds me of all the ways I fell for him the first time?

Faking It with the Frenemy is a second chance, lovers-to-enemies-to-lovers reunion romance with a matchmaking mom determined to make the heroine marry for money (love is optional), a billionaire single-dad hero who was the heroine’s first love, a cat that wants to be a queen, a dog that loves what the cat brings every morning, and a wild party with certain very inappropriately named treats from Japan. Love a book with lots of laughter and heart? Then grab Faking It with the Frenemy today!

I hop out of bed. The stupid alarm didn’t go off! No time to figure out why; I need to get ready for work, pronto!
I take the fastest shower in history, then wrap my hair in a turban so the towel can absorb the water. Not for the first time, I thank my stars that I won the genetic hair jackpot. It doesn’t go poufy or frizzy. Just stays nice and sleek without needing to be blow-dried. Another huge towel wrapped around me, I trot to the kitchen to grab my vitamin C serum from the fridge. I put it on every morning and night. Looking my best is part of my new identity, and that means taking care of my skin, among other things.
Just as I finish patting the serum onto my face and put the bottle back in the fridge, the door to my apartment unlocks. Adrenaline spikes, making my heart race.
A burglar?
I dismiss the possibility as soon as it pops into my head. Who breaks into a place this early? It’s barely seven in the morning. Criminals would be doing it at night or when people are at work. Not to mention the apartment complex has a locked entry that requires you to have a key or be buzzed in.
It’s probably just Evie, my absentee roommate. She somehow got finagled into a Vegas marriage, but plans to move back in as soon as she manages to divorce her crazy boss-cum-husband. Hopefully she isn’t here for moral support, because I don’t have time to lend a shoulder right now.
The door opens, and a man in a black T-shirt and jeans walks in. A baseball cap is pressed low on his head, covering most of his face.
Oh God! It is a burglar!
Cold fear pounds through my heart. I freeze, clutching the towel in my fist as lurid crime headlines flash through my head.
Home Burglary Gone Wrong: Secretary Slaughtered.
Boyfriend Sexually Assaults His Ex.
Female Body Found, Assaulted.
Panic spikes. I have no weapon!
I take a fraction of a second to take stock of my situation. Can’t run back to the bedroom—the kitchen’s in a nook and the fridge is closer to the door. The scum’s going to get me—he has a straight path to grab me if I make a move back to the bedroom. What can I use as a weapon? A knife? I don’t know how to throw it right, so that’d be like handing it over. Jut slash at him? What if he knocks it out of my hand and uses it against me? Besides, a kitchen isn’t the best place to fight. I have a gas stove, and every action-flick kitchen fight ends with a gas explosion.
But there’s a dirty wine glass in the sink. Yes! I grab it and hurl it at the invader with a scream.
“Shit!” he says, flinching and raising an arm in reflexive defense.
To my shock and irritation, the glass doesn’t even hit him. It flies low and shatters on the wooden floor at his feet.
Damn it! It was my best chance at hurting the asshole, and I blew it! Should I just go for a knife anyway? I really wish I had a gun! Or a nice, large, intruder-fending-off boyfriend like Jo was saying yesterday.
“What the hell?” he demands.
Did he just say what the hell, like he’s shocked and upset?
“Kim?”
Wait, what? “How do you know…” Finally he looks up, and I see the still-gorgeous blue eyes and sexy mouth. The broad forehead and lean jaw line. Recognition hits me like a cast iron skillet in the face. “Wyatt? What are you doing here?” I demand, my terror turning into outrage.
“I live here.”
“No, you don’t! This is my apartment.”
“But the—”
“No!” I cut him off before he can make any excuses or weird explanations. He’ll probably say something asinine, like how he won this place on a bet, too.
My phone is charging on the small table by the couch. I’m calling the cops and getting this crazy bastard arrested. Getting a wedding date will be the least of his worries. Hopefully he’ll resist, so the cops will have a reason to rough him up. I’m not asking for blood—just some good, solid punches. Maybe a broken jaw.
Gritting my teeth, I come around the kitchen counter fast. Wyatt’s eyes widen—ha! Bet he wasn’t expecting that!—and he starts toward me.
Oh, crap! I leap for the phone, in my best grand jeté style, but he catches me with my toes still a few inches above the floor. His arms squeeze so tight that the air gets forced out of my lungs like ketchup from a squirt bottle.
Oh my God. He’s going to crush me until I pop.
“Let…me…go,” I wheeze, squirming and kicking, refusing to die like this.
But the muscles I’m straining against feel like bunched piano wire, and I make about as much progress against Wyatt as I would against a piece of heavy construction equipment. This close, he smells like fresh pine soap and laundry detergent, plus a hint of mint toothpaste on his breath. I should’ve taken up karate instead of ballet. Then I could’ve broken his nose and legs by now, and been inhaling the scent of his blood instead.
“Will you stop?” he says. “You’re about to cut your feet up.” He moves, and there’s a definite crunching noise from the floor.
The wine glass.
Wyatt carries me toward the sofa. “Damn it, Kim. The superintendent gave me the key to this place. I’m moving in today.”

Currently, she shares a condo overlooking a small river and sakura trees in Japan with her husband and son. When she’s not writing, she can be found reading books by her favorite authors or planning another trip.

Email ThisBlogThis!Share to TwitterShare to FacebookShare to Pinterest
Labels: Excerpt, Faking It with the Frenemy, Nadia Lee, Release Blitz