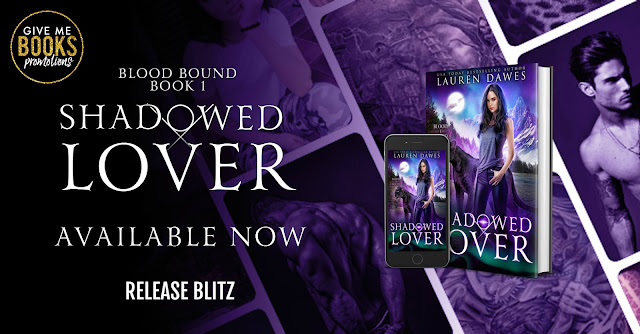 Loyalties will be tested.

Brooding leader of the Black Claw Shadows, Drake is still haunted by the loss of his twin sister over a decade ago. Tasked with investigating a string of female kidnappings in the jaguar shifter world, he’s also asked to protect the Leo’s only daughter, who turns out to be a lot more than he bargained for.

Betrayals will be revealed.

Headstrong daughter of the pride’s Leo, Neve wants more from life than to be mated and produce the next generation of shifters. When her cousin mysteriously disappears, Neve knows she’s become the latest victim of the rash of abductions. Willing to do anything to save her, she demands that her Shadow-turned-babysitter allows her to tag along on his investigation.

Delving deeper into the mystery together, will they be able to ignore the building attraction between them, or will their mate bond prove to be too strong?

She flung open the front door and walked out onto the porch, planting her hands on the railing and leaning into them. Sucking in a few mouthfuls of cool night air, she looked up to find Drake standing at the bottom of the stairs, his eyes reflecting the light coming from the house.
“What are you doing out here?” she demanded, embarrassed she’d been caught less than composed for a second time in an hour.
“I could ask you the same thing.”
She narrowed her eyes at him. “You’re infuriating.”
His mouth flexed into a sinful smile. “I’ve never been called that before. Stubborn. Unyielding. Hard.” Jesus. “All of those things.” He climbed the steps, and she turned to face him. “But never infuriating. I think most people would be too afraid to tell me that to my face.”
She darted her gaze to his mouth and let out a shuddering breath.
“Why are you out of the house by yourself?”
“I’m not by myself. You’re here,” she replied sweetly.
“You know what I mean.”
She bristled, but kept her anger locked down. “I can look after myself.”
“Your father has given me a direct order to guard your,” his eyes drifted down hungrily, “body, and I’m a real stickler for rules and order.”
She glared at him. “I just bet you are, but you should know I’ll make your life a nightmare.”
His mouth curled into a mocking smile. “You already do, sweetheart.”
Shaking her head, she said, “I don’t need you here when I’m at home. I don’t even know why you’re still here, lurking outside the front of my house like a goddamn stalker.”
“Your father wants me with you twenty-four-seven, so you’d better get used to seeing my face.”
She didn’t miss the fact he didn’t answer her other question. “I still want my privacy.”
“Bathroom and shower breaks. All other times, you’re going to think I’m glued to your ass.”
Wow. That was an interesting visual, but it wasn’t wholly unappealing.

Lauren Dawes is an urban fantasy/paranormal romance writer and the author of the Half Blood Trilogy and the Dark Series. She likes her vampires dangerous, her werewolves vicious and her Norse gods ruthless.

When she’s not writing, she’s reading, hanging with her young daughter or designing book covers. She currently lives in Canberra, Australia.