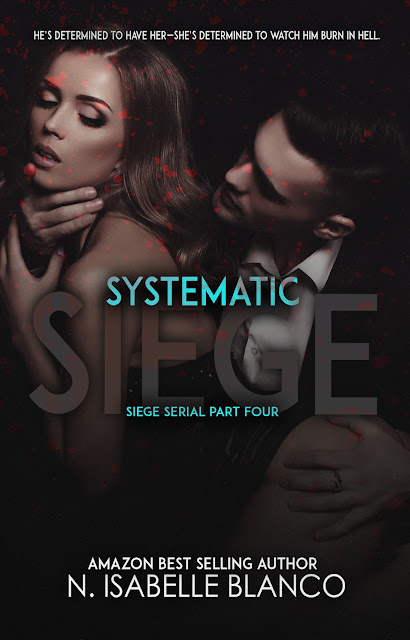 He’s a monster. An even bigger one than I ever imagined . . .

But he’s not the monster I thought he was.

He’s not the monster I set out to destroy. Instead, he’s the monster that will annihilate everything in his path.

A monster that looked me in the eyes and admitted he killed his ex-best friend. For me.

And he’s going to do it again. Andrew Drevlow has sworn vengeance on my behalf and nothing I do or say will stop him.

But he’s not the most twisted creature here. I am.

I don’t want to stop him.

His bloodlust ignites my soul.

His rage leaves my heart pounding with hunger.

I’m fragile, distorted, my entire reality realigning itself, and in a single broken moment I realize:

His obsession with me has turned psychotic.

My newly awakened obsession with him has become even worse . . .

Disclaimer: Systematic Siege is a series of Dark Romance novellas, each roughly 20,000 words long or less. Due to sensitive subject matter, please read with caution. This series features dark themes that aren’t for everyone.


He made me come all over his tongue in that dream, his fingers relentless inside me.

It’s all I can think about as he paces in front of me, his tall, muscular body lovingly encased in that charcoal suit.

He’s talking about some event he’s going to tonight on behalf of the company; that much I know. His raspy, deep voice has become the perfect backdrop to my pounding heart.

In reality, I’m watching the headlines come in, one after the other, thanks to the alert I set on my phone.

I dare a quick peek at my notifications bar.

Son of Corporate Tycoon Had Been in Hiding Prior to Disappearing.

Barnard Wellington: Everything You Need to Know About His Fall.

My heart races harder and I quickly return my attention to Drew, my mind a confused whirlwind of contradicting thoughts.

I don’t know why, but I know this has to do with you. Bullshit. I know why. The psychotic look in his eyes when I refused to tell him what Stephen did to me is one I’ll never forget.

God damn it. Your tongue. I had forgotten how good it feels. He made me feel pleasure for the first time in seven years.

First, in the back of my car.

Then, he began haunting my dreams again.

Fuck. That dream I had two nights ago seemed so real. As if he’d actually been in my room, eating my pussy so lovingly.

You’re my enemy. Yet he decided to help my mother of his own volition, before I even asked him to.

The gratitude is still a heady sensation in my veins. I want him, this man who is my enemy. This man that once betrayed me.

I shouldn’t. God help me, I shouldn’t. Hating him is second nature. Has been for the last seven years. It hasn’t gone away.

I think I hate him even more now because all I can think about is walking up to him and biting that sexy, thick neck.

I’d do it hard. Mark him. Possibly draw blood.

“I’ll need you to come with me to the event tonight.”

His words slap me out of my sex-starved haze. “No.”

Drew slows in his pacing. Then, he comes to a full stop, his head swiveling in my direction. “Excuse me?” His eyes are hard. His jaw clenches. This is both the man that seems to be obsessed with me and my boss glaring in outrage at my denial.

My entire body tenses on the chair, preparing for battle, every instinct aware of his aggression rising in the room. “I read your calendar and the briefs of what that event is going to entail. You don’t need me with you.”

But I need distance. Time to myself. Looking at him is enough to erase any sexual trauma. I feared sex for so long.

Yet now I’m crazed to suck his cock.

“You’re right. I don’t need you with me for this event.” He starts walking to me and something about his gait seems cruel. “What I do need is you by my side.” Drew grabs the armrests and leans down, trapping me with that ruthless, unrelenting gaze. “At all times. I went seven years without you—don’t ask me to spend another needless minute more.”

“What?” I snap, annoyed at his closeness. At the things he makes me want to do. “You’re planning on moving in, too, just to keep me close at all times?”

His lips twitch and all I want to do is rub my clit all over them. “Don’t tempt me, baby.”

My thighs quiver. I tense them, knowing that he’ll see if I press them together. My pussy aches so bad my teeth start grinding. “I have a choice.” The statement holds no authority, just the softness of a woman in heat.

I press back into the chair, desperate for some space.

Drew’s eyes search mine, before falling to my lips. I gasp as he bites his bottom lip slowly.

He’s going to kiss me.

If he does, I’m going to snap and attack him. Force him to fuck me right on his desk.

He’s still staring at my lips, his pupils slowly expanding until his eyes appear black.

Panicking, I blurt out the first thing that comes to mind. “If you want me to go the event, you’ll answer a question for me and you’ll answer it honestly.”

He backs up a bit at that, seeming surprised. “I’m your boss, remember?” His eyebrow quirks with amusement.

I glare at him and push against his chest until he finally eases away from me. “You want me here more than I want to be here.”

His eyes flash with pain and I blink in surprise at the regret I feel. “You’re probably right about that baby.”

That fucking word. The way he says it.

As if seven years didn’t pass. As if he never betrayed me. As if we’re still back there, in the field, where he’s making all his pretty, glittery promises and pretending I’m his world.
You are his world. No idea where that thought came from but I shove it down. Lifting my chin, I stare at him right in the eyes. “If you want me to come, tell me. Where’s Barnard Wellington right now?” 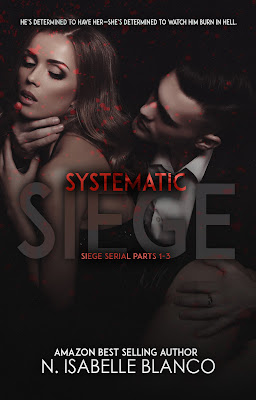