Release Blitz - The Dark Side of Chemistry by Ryleigh Sloan

They say you can’t be in love with two people at the same time, but that’s exactly what happened to me. I knew it would catch up with me one day but I didn’t expect that when I went down, I’d take Trent and Jensen along with me. Trent has always been the loving and dependable one—Jensen, unpredictable, cruel . . . and compelling.

When Trent was given orders to deploy to Afghanistan to test a highly classified and dangerous serum, I couldn’t shake the feeling that life was about to irrevocably change. Little did I know how much. My secret was just what an unknown enemy needed to destroy our lives.
And he did.

I made a mistake once, and now we’re all paying for it...


We were nearly there when I noticed the Lt. Colonel staggering toward us from the elevator on the opposite side of the hallway. I thought fast on my feet and did the only thing I could do—and quite frankly the only thing I’d wanted to do since I saw Skyla in her hotel room. I grabbed her face and kissed her with such intensity it took my breath away.
Pulling her closer to me, I deepened the kiss; flicking my tongue over hers, a low groan escaped my lips. Up to this moment, I hadn’t realized just how much I’d missed her lips on mine, craved the taste of her. In that moment, I realized how it must feel for an addict when he gets his fix. Her hands curled into my hair and as I looked into her face, I was shocked at what I saw there. She wanted me, I could see it in her eyes, feel it in the hands that were roaming my back. She was so close to me that I could feel her heart racing beneath the thin material of her dress and frantic need overwhelmed me.
I ran my hands down her waist to her tight ass and pulled her hips flush with mine, my cock pressed against her stomach. When she closed her eyes and whimpered ever so softly, I started walking us toward Stephenson’s room. I would have her, I had to have her. A sound penetrated the haze of lust and without breaking the kiss, I flicked my eyes in the direction of the sound. The Lt. Colonel had just stumbled into his room and was closing the door. It was as though a bucket of ice was thrown over me.
What the hell was I doing? And what was she doing kissing me back that way? She was Trent’s.
My hands shot out to Skyla’s shoulders and I pushed her back. The surprise and hurt radiating from her face fueled my anger. I wanted to hurt her the way she hurt me—show her what it felt like to have her feelings disregarded.
“Easy there, tiger, I know Trent’s been away for a while and you are . . . frustrated . . . but I’m not into my brother’s sloppy seconds.” I watched the deep red flush creep up her neck and knew I’d gone too far, but I couldn’t stop myself. Forcing a chuckle from my throat, I walked away, leaving her gaping after me.
“What the hell, Jensen?” Skyla yelled, grabbing my shoulder and catching me off guard, so my back slammed into the wall. She jabbed her finger into my chest and all I could do was blink at her. “You kissed me, your hands were all over me!”
I pulled my lip into an arrogant sneer I didn’t feel. The same look I’d given her countless times to hide the pain. I leaned in, my lips brushing her ear. I felt her shiver and loaded my voice with contempt. “Don’t get your panties in a bunch. Stephenson was coming and I had to do something to save us from suspicion. We’re on an assignment, Sky. Not a real date. Don’t get pissy with me because you got carried away by a simple kiss.”
Her hand came around to slap me across the face but I saw it coming and grabbed her wrist. Squeezing hard, my eyes narrowed into thin slits as I looked down at her.
“Watch yourself, Skyla, we wouldn’t want Trent to pick on the underlying . . . tension between us now would we?” Seeing the look of panic on her face, I added bitterly, “Don’t worry, I won’t tell if you don’t. I mean, what’s one more secret between us, right?”
Turning on my heel, I left her there to glare after me and descended the stairwell to the ballroom. I fucking hated myself. 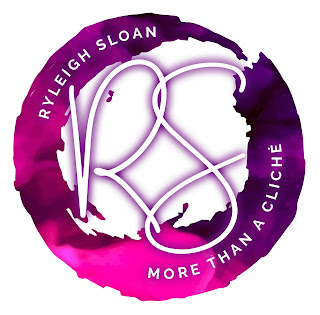 Ryleigh Sloan is a romance author with a masters degree in being an indecisive control freak. Her favorite pastime is driving her friends crazy by writing multiple books at once.

Following the advice of established authors to read, read, read in order to hone one's craft, she does just that and engrosses herself in as many romance novels as she can get her hands on. Her bad habit of writing more than one book at a time carries over to her reading and she can be found reading, and listening to multiple titles at once and enjoying every moment.

Email ThisBlogThis!Share to TwitterShare to FacebookShare to Pinterest
Labels: Excerpt, Giveaway, Release Blitz, Ryleigh Sloan, The Dark Side of Chemistry