Release Boost - The Other Side of Wrong by Christi Barth


Jake McQuinn’s lived and loved the rock-star lifestyle. But a family scandal ripped him away from his band and back home. Back to boredom, a buttoned-up sham of a job, and a desperate need to whitewash his image. His family’s pharmaceutical company could crumble without him. His band’s epic comeback won’t happen without him. How’s he supposed to choose which one to save?

Cassidy--just one name as befits one of the biggest pop stars on the planet--has discovered the downside to fame. Finding a decent guy to date who understands her demanding career and crazy schedule? Impossible. Until she remembers the rocker who almost rocked her world a few years ago…

Jake thought he walked away from her for all the right reasons. Cassidy, however, intends to get him back. And she’s going to use his band’s shot at redemption and rock legend status as leverage. If she convinces him to date her again and drop the good guy routine? Even better. Doing the right thing for everyone else feels so wrong for Jake. And making a bad decision about hooking up with Cassidy could be the best thing yet… 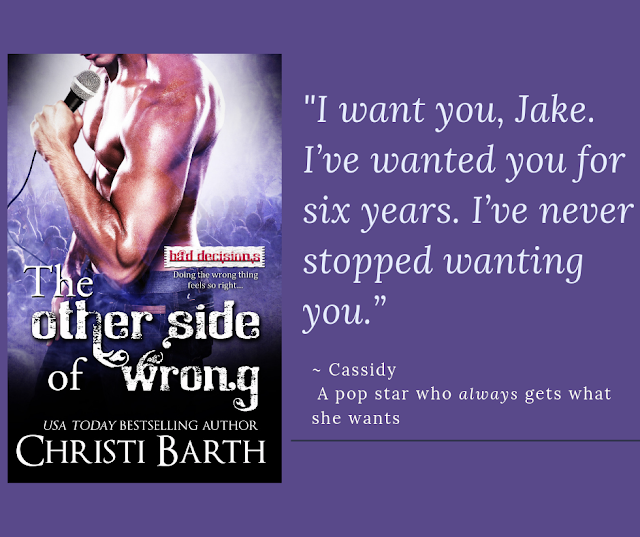 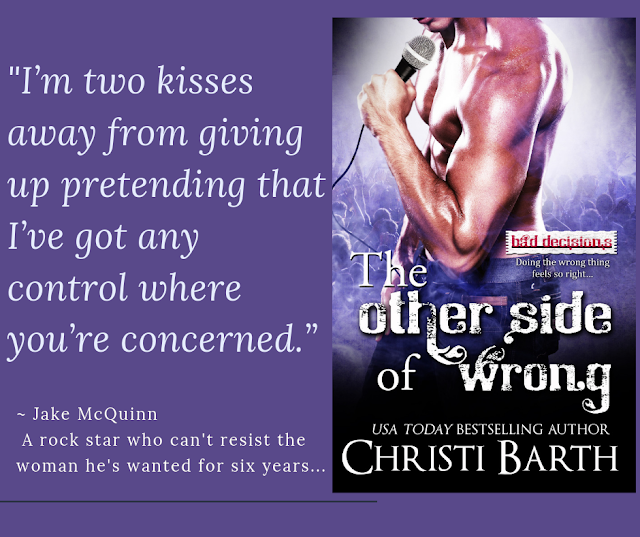 “It’s a blue moon rose. Because the chances of us getting together again after Coachella? Well, it could only happen once in a blue moon.”
Her head canted toward him. Dampness at the corners of her eyes made them shimmer. Guess it hadn’t been a stupid idea after all. She swiped at the tears with long, glittery nails that made him think of champagne.
“This is the most romantic thing I’ve ever received. The most thoughtful. Thank you, Jake.”
“Thank you for pushing your way back into my life.” They stood there, staring at each other, for a long beat.
And then another. And another. The air was charged with…something. Could she tell how hard—and how easy—it had been for him to make this gesture? Could she tell that he never wanted this night to end?
Could she tell all the things Jake was tempted to say, but knew would just make splitting up after the Garden a million times harder?
Cassidy’s whole body jerked, as if she’d needed to physically break away from their long, deep, look. The tension also broke faster than a snapped guitar string. In a teasing voice she asked, “Does this mean you’ve forgiven me for that? For being so forward that day in your garage?”
“Come here and find out.” Jake backed across the living room of the enormous suite. He put a deliberate swagger in his walk. Whatever had or hadn’t just passed between them, he knew damn well what Cassidy wanted now. So, he unbuttoned his shirt, a slow strip tease that didn’t need any music.
Cassidy followed, an extra swing in her sassy hips, too. Then she stopped, right in the doorway, with one hand on the frame way above her head. It lifted the hem of her dress high enough to show off the under curve of her sweet, sweet ass. “Is that a bed? An actual bed? We’re going to have sex in a bed?” She slowed the last three words down in exaggerated emphasis.
“I promised you a real date. Dinner, flowers, and now, yeah, sex in a bed. We’re going old school tonight, Cass.”
“I like it.” She kicked off her high-heeled sandals to trail her fingertips along the deep brown comforter on the king-sized bed. “What will we do with all the extra room?”
“Don’t worry. I’ve got plans.”

USA TODAY bestselling author Christi Barth earned a Masters degree in vocal performance and embarked upon a career on the stage. A love of romance then drew her to wedding planning. Ultimately she succumbed to her lifelong love of books and now writes award-winning contemporary romance, including the Naked Men and Aisle Bound series.

Christi can always be found either whipping up gourmet meals (for fun, honest!) or with her nose in a book. She lives in Maryland with the best husband in the world. 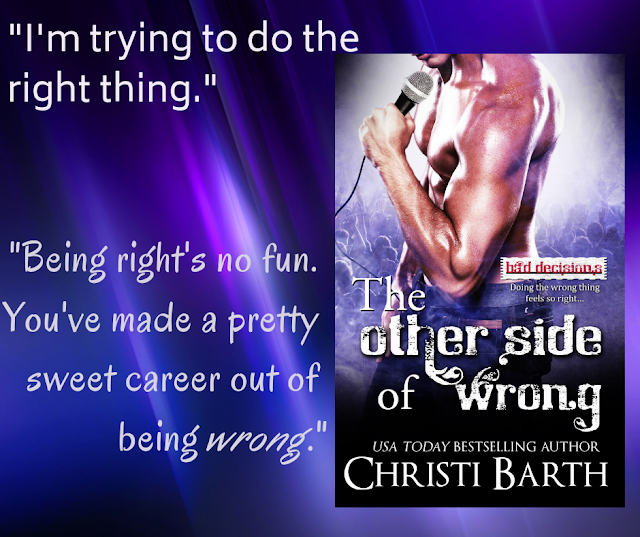 Email ThisBlogThis!Share to TwitterShare to FacebookShare to Pinterest
Labels: Bad Decisions Series, Christi Barth, Excerpt, Release Boost, The Other Side of Wrong