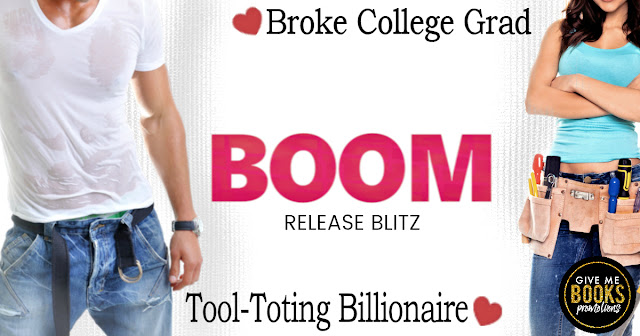 
New from a USA Today Bestseller: One crumbling house. One exploded truck. And two people who think they can't stand each other.

Arden Weathers. She's a girl on a mission, and that mission most certainly doesn't involve Brody Blastoviak, the hometown hottie who made her college prospects go boom, and not in a good way, six years ago.

Brody Blastoviak. He knows better than to stick his you-know-what into Crazy. So why is he losing his cookies over Arden Weathers, the uptight chemistry partner who "accidentally" torched his truck back in high school?

Now, older and wiser, these former classmates are supposedly on the same team – working to restore a crumbling beach house that both of them want to claim as their own. Too bad for Arden, Brody holds not just the deed, but all of the cards and clout, too.

She's a broke college graduate while Brody is not only hotter than ever, but obnoxiously rich and famous, thanks to Blast Tools, a rags-to-riches brotherly venture. It's all so stupidly unfair, especially when Arden makes an appalling discovery. Turns out, she's not nearly as immune to Brody's charms as she thought.

To my infinite horror, I was staring into the hard gaze of Broderick Blastoviak – aka Brody Blast, a guy I'd known back in high school.

We had a history, and it wasn't terrific.

In school, he'd been a total trouble-maker through-and-through. Cocky. Obnoxiously brilliant. And too dangerous by half.

Unlike me, he never, ever followed the rules – and yet, he never seemed to pay for it.

That dickweed had cost me a full-ride scholarship. He was the reason I'd been working two jobs to pay for college, even while taking on far too many student loans.

In a roundabout way, this also meant that he was the reason I hadn't been able to purchase this house on my own, back when I'd had the chance three years ago.

I freaking hated him.

Even if I hadn't known this already, the look in his eyes would've been proof enough.

I sputtered, "What are you doing here?"

"Oh come on!" I said. "It can't be your house. There's no furniture. And besides, why would you want to live here? Don't you have houses all over the place already?"

This wasn't as far-fetched as you'd think. Brilliant or not, Brody hadn't gone to college. Instead, he'd founded a tool-and-die company with his two older brothers and then proceeded to take the market by storm.

These days, Blast Tools – that was the name of their company – was famously successful, just like the company's three founders.

And I meant "famous" quite literally.

A few years ago, by some miracle, the brothers had gotten themselves a weekly cable show on the Home Network, where they used their own tools to remodel older homes or sometimes build new ones.

And just for the record, they looked very good doing it.

USA TODAY Bestselling Author Sabrina Stark writes fun contemporary romances featuring plucky girls and the bad boys who capture their hearts. She's worked as a fortune-teller, barista, science writer and alas, jobs that required a hairnet. She has a journalism degree from Central Michigan University and is married with one son and a bunch of very spoiled kittens. She currently makes her home in Northern Alabama.