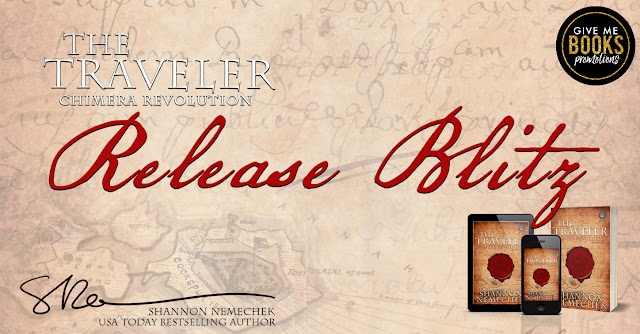 From USA Today Bestselling Author Shannon Nemechek comes a brand new series "The Traveler" will take you on an EPIC adventure through time.

Picking up from Chimera Rebellion's cliffhanger ending, Chimera Revolution takes Katie and Colm on a trip through time to 1779 Savannah in the midst of the American Revolution, where they are plunged into a world of spies, magic, and to face an old foe. As they attempt to protect the book, Katie seeks out someone to tutor her in magic as the noose tightens around them an ancient friend appears to guide them but is this new friend truly friend or foe?

Secrets reveal themselves as Colm must decide which side he is on. He must confront his great-great-grandfather and convince him that life without Eleanor is possible, and to fight on the right side of history all without revealing the future and keeping him alive in the process.

Danger is around every corner, unsure of who to trust the pair must rely on their knowledge and wits; as they attempt to keep the book from those who seek to destroy it and to destroy them.  The journey they embark on is a very different–and a vastly more dangerous one.

Can they protect the book and save themselves or will the prophecy be fulfilled?


***Due to the nature of the storyline (war, romance, and witches, etc), this story comes with a warning for adults 18+ Due to violence, cursing, and sexual situations.

The mid-day sun dipped behind a cloud as bitter cool rain began to fall. Colm Alexander Malcom O’Donnell stood under the eve of the roof on the large porch, leaning against one of twelve Romanesque pillars his father, The O’Donnell, had insisted be part of the architecture of the home. He hated them, he hated his father, and he hated the British. Most of all he hated his name. Called after his father and his father before him, Colm was a family name, but after recent events the young man had begun to use Alexander.
He stared out toward the British encampment his father had allowed onto the plantation. He supposed The O’Donnell really did not have much of a choice since the land had been gifted to them by King George, but it still made him sick to see the flurry of Redcoats scamper across their land as if it was their own. He wanted to kill them all, every last Redcoat alive, and he wanted to kill his father for taking the only woman he would ever love—Eleanor MacAllister.
He could still see her tied to the pillar in the town square, the fire raging higher around her. He could still hear her screams—they haunted his dreams. He had lost so much that day, the day his father, the governor, and the British troops murdered Eleanor. It was that day he made it his mission to kill as many of them as he could. He stood in silence, waiting and planning, but until that day came, he was obligated to the old man. His silent solitude was broken when the voice of his father echoed through an open window.
“Alexander!”
Alex turned to see a mature, portly man with his body halfway through the office window.
“Alexander! Come into my office. We have much to discuss. Why you insist on being called Alexander is beyond me.” His words trailed off as Alex turned back into the house.
“I insist on being called Alexander because I do not want to share a name with you, Father!”
Shaking his head, the stout man sat behind the desk. “I wish you would just get that woman out of your head. She is gone and you are here. We have more important matters to discuss than that harlot.”
Alex pounded his fists into the desk, his face red with anger. “Father, do not call her that again. Do not even mention her name in my presence. If you do, I shall leave this place and I will not return.”
“Fine… Fine… Sit down, son. We must discuss the plans you have for your new regiment. I will be inviting the governor to attend the ceremony and ball, and I want to make sure we are on the same page. He is quite intrigued with the idea of you leading troops. He seems to have taken a liking to you.”
Alex sat facing his father and listened, his anger growing with every passing moment. He knew he must tamp it down if the plans he had made with the Patriot commander in charge of the southern forces, General Lincoln, were to come to fruition. He couldn’t make a mistake. A mistake could cost them everything.
“I think Governor Wright will be quite interested in what your plans are, but first I feel it is necessary that we go over them together.”
Alex shifted in his seat. He wanted so badly to inform the pompous windbag and his governor that his plans were to see them all dead, and that the men of the Loyalist regiment he led were not as loyal to the Crown as he made them out to be. Alex had ensured that every able-bodied man who served under him was loyal to him and loyal to the cause of freedom, and would not sink under the boot of the Crown. He relished in thoughts of the day he would see his father and Governor Wright slink their way back into the waiting arms of King George. He was quite sure his father would try and take the property away from him, but he had covered himself on that possibility as well. If it came down to it, he would fight for himself and the residents of Invergarry Landing until his final breath. He would kill his father if that was what it took.
“We have gone over these plans extensively, Father. A rehash would be a useless waste of time for both of us. Now why have you really called for me?”

Shannon is a USA Today Bestselling Author of over 18 novels and novellas.
Shannon is a multi-genre author who writes, Military, Contemporary, Historical Romance and is working on her first Fantasy series.
Shannon started her writing career while still serving in the US Army.
Shannon grew up in Macomb, IL where she graduated from High School in 1987 and soon after joined the US Army. Shannon served from 1987 to 2015 during Operation Desert Storm and during Operations in Iraq and Afghanistan.
In April 2015 Shannon retired from the US Army with 23 years of service as a Unit Supply Sergeant. She is a mother of 4 children and a grandma to 2 beautiful Granddaughters. She has been married 26 years to her husband, Ken. They reside in Staunton, IL a small town along Old Route 66.