I am not a good man.

I have lied and cheated and stolen. I've decided between life or death, like it was my due. None of it matters, not anymore. These are not my sins.

I see her raise her hands, the dark metal she's clutching reflecting the moonlight. Her finger trembles as she cocks the gun pointed at me. Her eyes are cold, determined, but I know.

My name is Devon Andre and I confess my sin. I am not a good man because this is the woman I love.
She pulls the trigger.

* Mature reader advised due to sexual content and strong language.

Vendetta by Autumn Karr and Sienna Lane  reminded me a modern day version of Romeo and Juliet. In this case, Devon Andre and Leighton Moore are children from two mob families. who have bad blood and history. Devon Andre was left an orphan at the age of 13 when his family went missing and found murdered. He was soon taken in and raised by his uncle Frank. Under his care, Devon wanted to solve and get to the bottom who killed his family. When gossip and whisperings points in the direction of the Moore family, Devon and his family plans to seek their revenge through Keith Moore’s daughter, Leighton. Soon Leighton finds herself a captive in the Andre household.  As a prisoner, she is now at the mercy of Devon locked in a bedroom. Well as the story progresses, secrets and twist and turns are exposed causing Devon and Leighton to realize is vengeance worth it? Can one sacrifice family for love? As with any love story, Devon and Leighton must face the biggest battle. Family, Truth, Honor or Love?

Did I love Vendetta? To be honest, not so much..  I don’t hate it but I felt this book fell short in what could have potential to been a great book.  The idea and blurb of the story sounded great and surely it caught my attention in wanting to read this book.  What I liked about the book was Devon.  He seemed to have been the only character that I felt gave meaning to the story.  I did wished to learn more of his upbringing and past.  As for what I didn’t like was that I felt this book lacked was the connection to the characters especially with Leighton and the secondary characters. Readers were left to believe in the beginning that Leighton and Devon didn’t knew each other or had any interaction but 50% in the book we find out otherwise. As for the secondary characters that played integral part of the story, their connection to the story fell flat. Some of the major players were not given proper introduction and why they did act the way they did.  As for the last minute twist and turns, it felt random and I was left feeling okay that was so sudden. Also, the setting of the story took place 80% in a bedroom. I know she’s a captive and all but I expect to have more storyline if you are going to leave her in the bedroom. The scenes in the bedroom felt repetitive and I wanted a deeper understanding of the connection of Devon and Leighton. I did like the concept of a forbidden romance with the Romeo and Juliet vibe.  I did like the concept of a forbidden romance with the Romeo and Juliet vibe but I just wished the authors went further into their romance and the vengeance aspect. 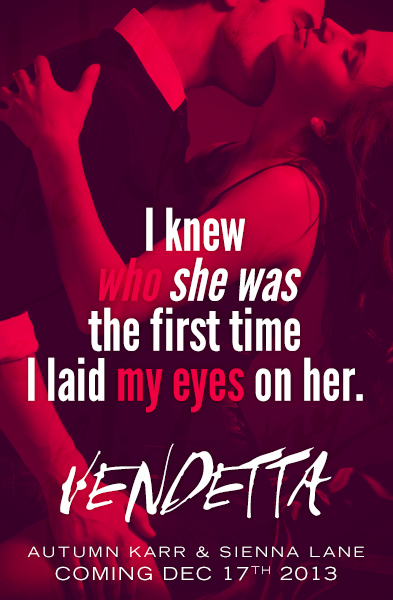 “You didn’t tell them I left the door open. Why?” he demands, his voice hardening. “Why, Leighton?” he repeats when I don’t reply. “Why do you think?” I spit back at him, hating him for asking this question. He puts his hand on my sore shoulder lightly, careful not to hurt me. “Tell me. I want—I need to know why you'd protect me, after everything?” “Because of this,” I snap, leaning forward and capturing his lips with my own. He responds instantly, taking my mouth in a punishing kiss. He starts to suck on my bottom lip, and I run my hand up his shirt, feeling each taut muscle of his six-pack. He moans at the contact, but gently pushes me away. “Fuck,” he whispers, sounding defeated. “I know what’s going to happen,” I say sadly, huffing out a breath. “I know it doesn’t change anything, but right now I don’t care. Kiss me, Devon.” 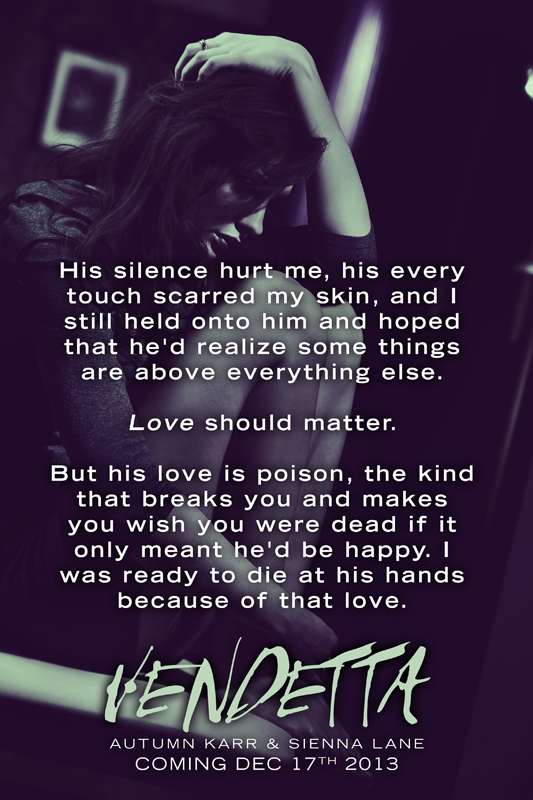 Sienna Lane and Autumn Karr are two friends with a joint love of reading, writing, candy, and Disney heroes (and Disney songs, of course.) When they aren’t scheming against fictional characters, or talking about their favourite books, you can find them ogling tattooed models and trying to figure out how to get them to do a cover shoot for their next book. Together they wrote VENDETTA, releasing this December, and hopefully many more books to come.They love to hear from readers, so don't hesitate to contact them through their Facebook page (link below).