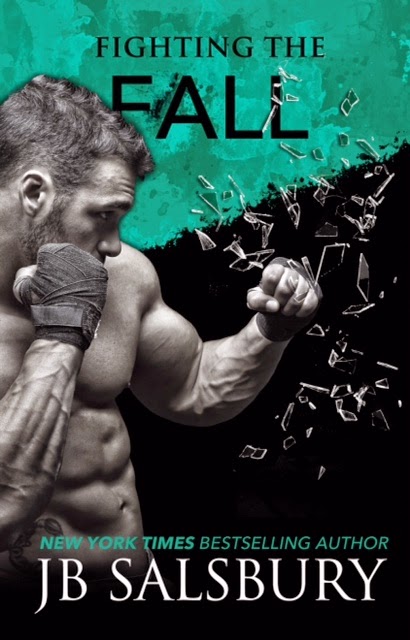 The toughest fighters aren’t created in the octagon but are born of necessity. When life delivers blow after punishing blow, you fight back or get destroyed.

Eve Dawson has had her fill of bad luck. A string of unhealthy relationships has left her angry, bitter, and frustrated. She’s given up on being happy and settles for content. Swearing off men, she repels advances and makes herself a challenge to even the most persistent suitors. After all, how much can the fragile human heart take? But life isn’t finished with her, and when things can’t possibly get worse . . . they do.

Stay on your feet.

It’s Cameron Kyle’s motto, but with his fighting career ripped from his grasp, a child he wasn’t strong enough to save, and a marriage that even the brawn of a heavyweight couldn’t hold together, it’s getting harder and harder to stay upright. He takes on the position of CEO of the UFL, intent on hiding his biggest weakness in order to forge a path that leads him back into the octagon.

When an old rival mysteriously gets wind of Cameron’s plan to fight again, he comes out of retirement to settle old debts, but secrets, lies, and betrayal threaten to deliver the death-blow. The distraction of a sass-mouthed girl seventeen years his junior is the last thing he needs until a tragic accident shatters the firm foundation of his resolve and he realizes just how far he’s fallen.

Will they risk it all and fight to be together? Or does defeat lie within the fall? 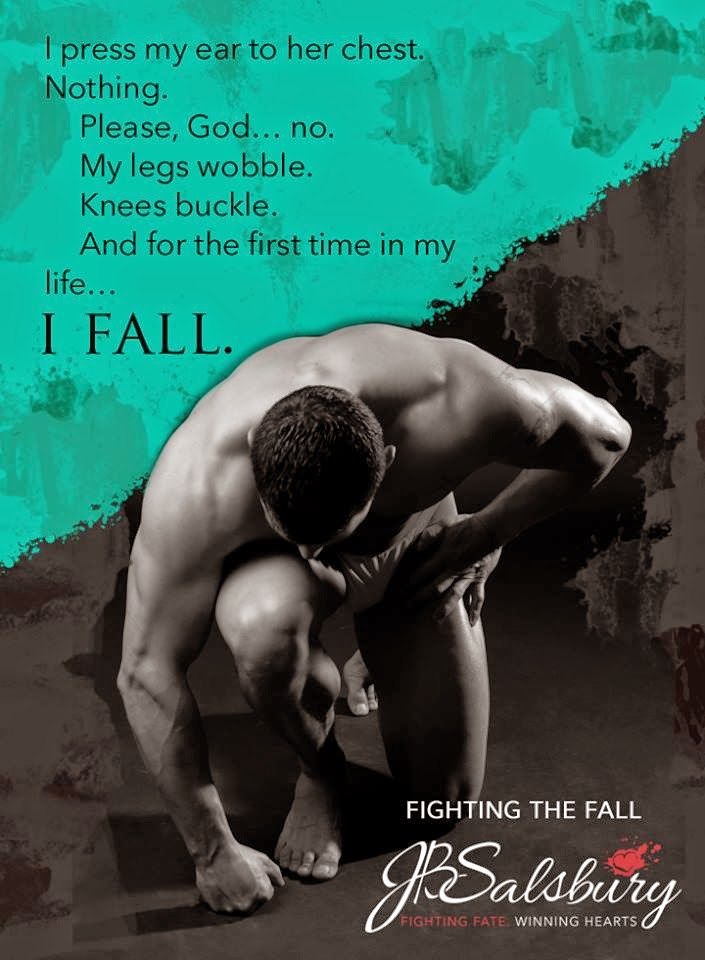 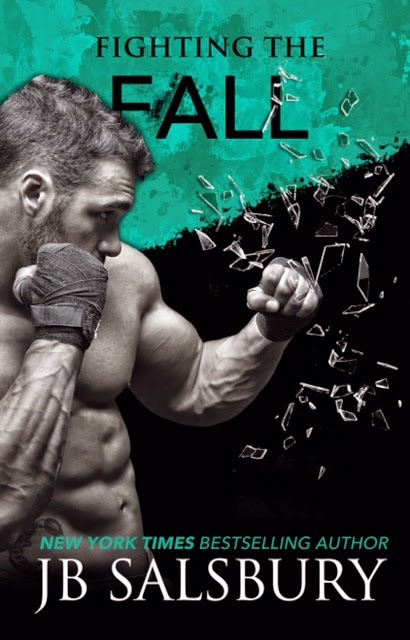 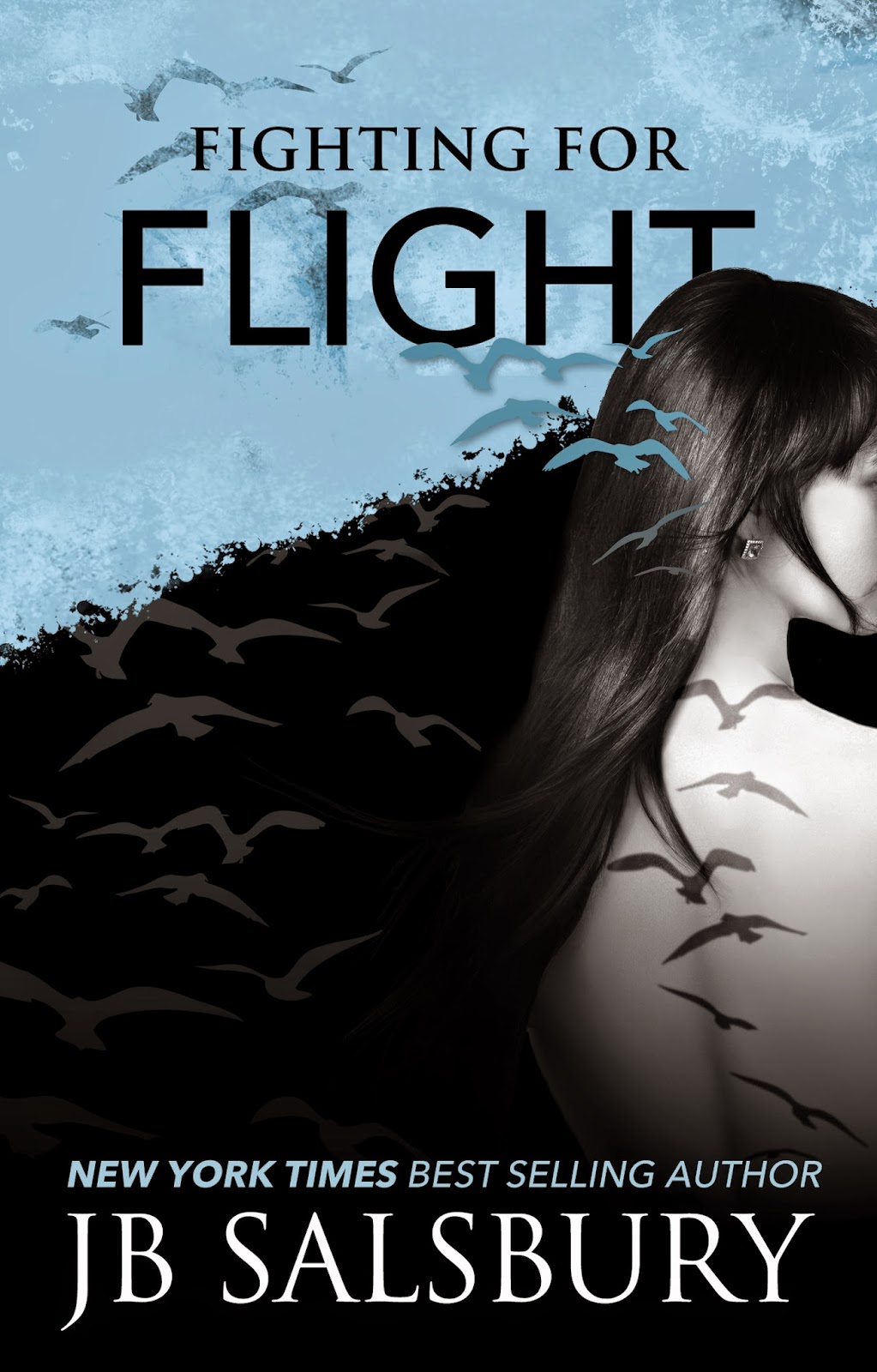 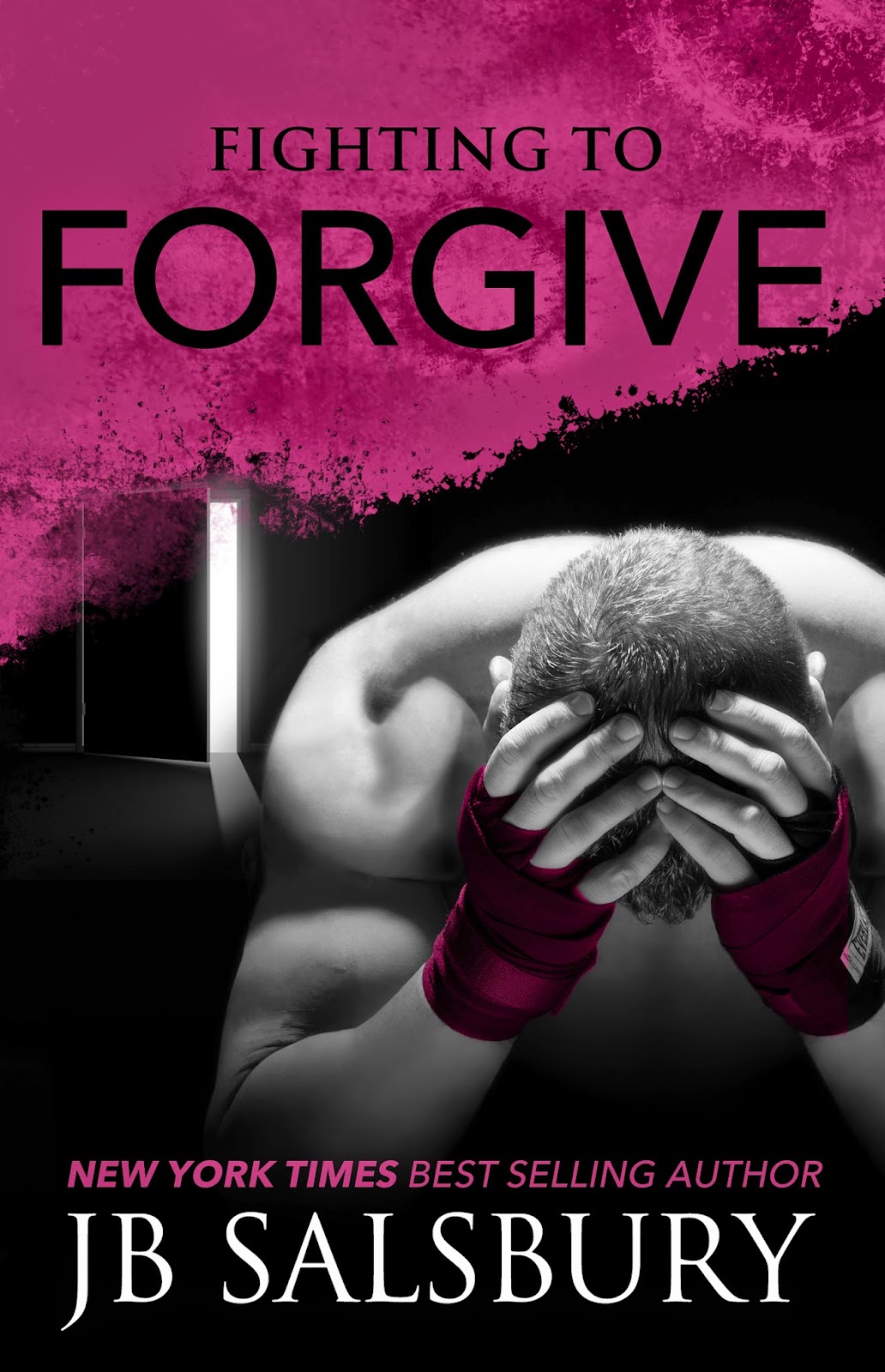 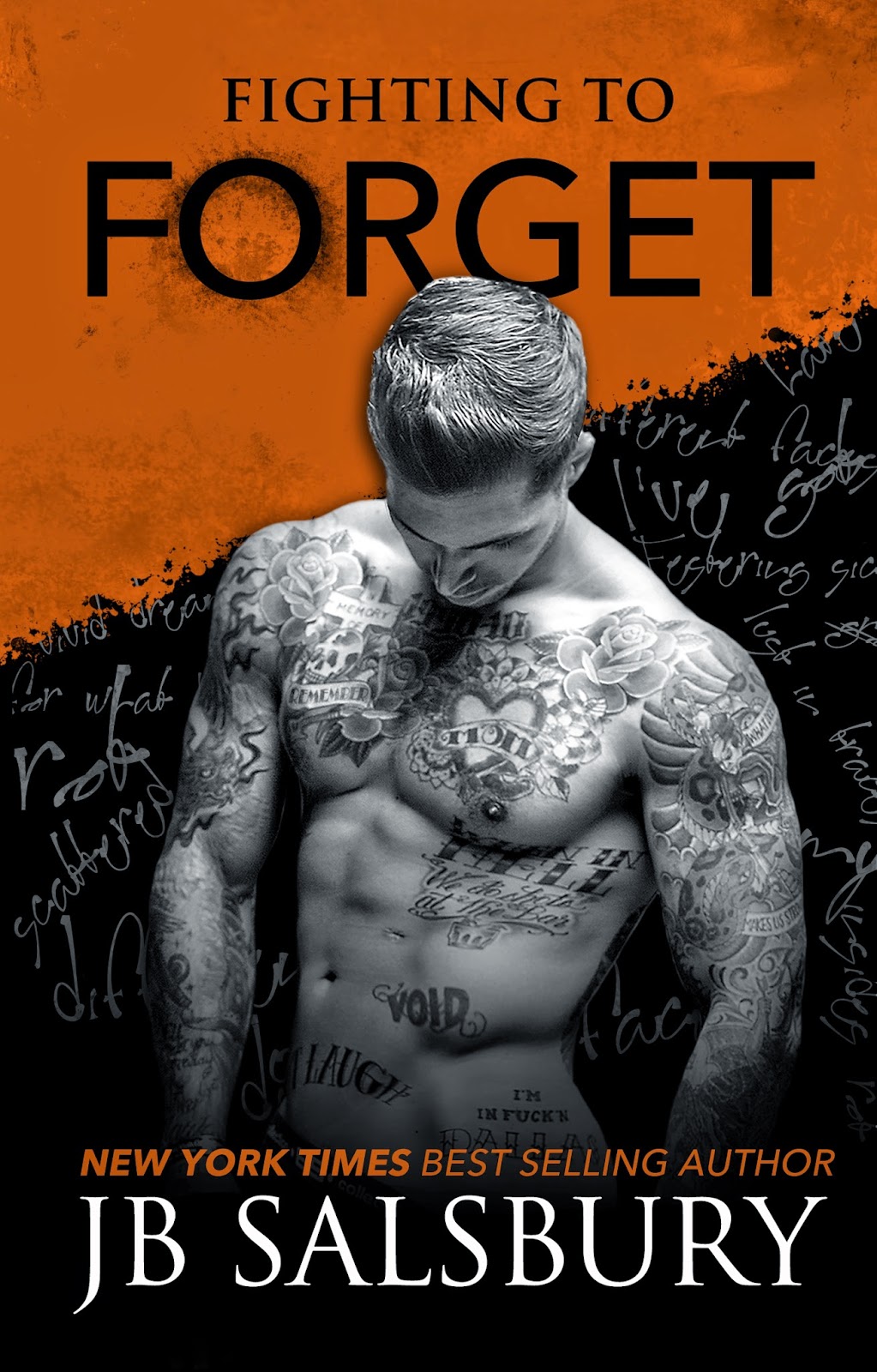 You know it’s special when you read a book...not just any book...but that one book that grabs a hold of your heart, and takes you on the most beautiful journey. A book that, from here on out, you will compare all others to. A book that sets the standard. A book that will from now on set the bar for me the reader, as well as for the author. This book was all that for me.

I would like to think I have been with Jamie since pretty close to the beginning. I remember the first time I laid eyes on Fighting for Flight, I said to myself, "Cool Cover...fighter romance...never read one before...why not?" Little did I know that my life was about to change.

Many months, and four books later, I am sitting here trying to figure out how to put into words how I feel about Fighting the Fall. I am proud to say I am a part of a fantastic blog and one of my perks is getting to read a lot. I have put up many five star reviews and enjoyed so many books. With that being said, I feel like I know when, in my gut, an author has made an impact on me that will change me forever.

I have loved every single book in this series. I feel like I know all of these characters and have taken these journeys – some pretty rocky –with them. JB Salsbury draws you in and makes you feel like these people really do exist, like you are along for their ride. A good writer hopes for that...a brilliant writer achieves that.

This book will make you experience every emotion you have and some you didn't even know existed. You will laugh, you will cry. You will be scared to death to turn the page for two reasons. One, you are afraid of what is going to happen; and two, you don't want it to end. The epilogue alone will f*ck you up.

We met Eve in book one and finally hearing her story was exciting. She was always the happy, crazy, life-of-the-party girl, so hearing how insecure she was really shocked me.

“Booty calls, one-night-stands with the occasional meal, it's more than what I'm used to, and if I can get the occasional night in his arms while he sleeps, it'll all be worth the eventual meat grinder I'll be putting my heart through.”

Cameron...*sigh*.... Are you ladies ready for your next book boyfriend?

"You give it to me the way I like, listen when I need you to listen, but fight me when I need you to fight me. And I f*ckin' love it when you fight me, babe. I'm thinking I'd like to get in there while you're pissed at me. Watch you come unglued while I'm buried deep."

The camaraderie between these two is so fun to experience.

I don't want to give away too much. I just have three simple words: BUY. THE. BOOK... In fact, BUY THE WHOLE MOTHER FREAKING SERIES. You won't regret it. I promise. JB, congrats on an amazing book. You set the bar so high this time, screw being nervous about what the readers think of this book...I would worry about how you are going top it in the next one.

Could I give this book five stars? Yes, I could. I know that's the norm. But guess what? This is my f*cking review, so I can give it however many I want. I give Fighting The Fall 10 epic stars. 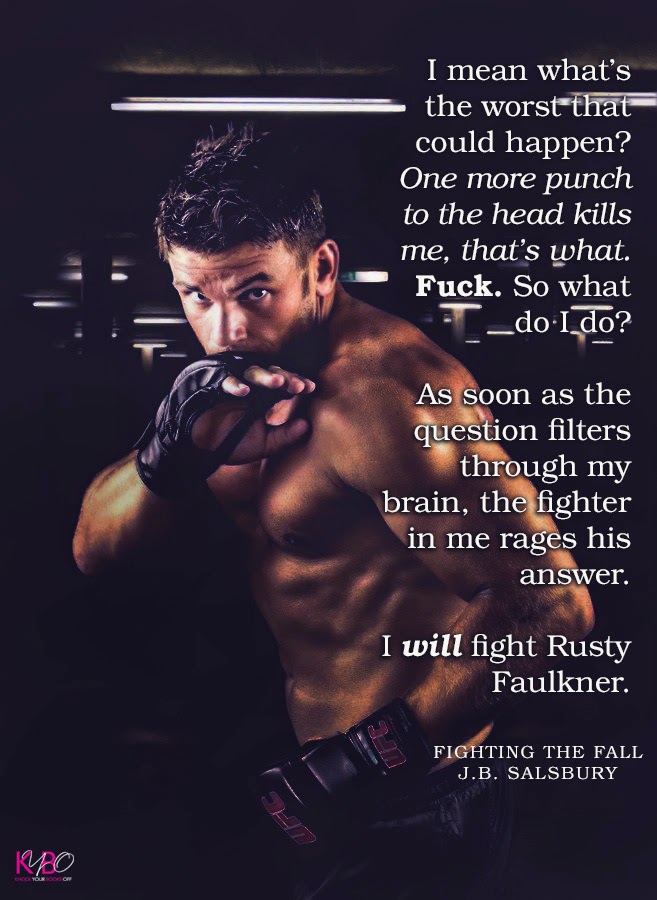 I feel his eyes on me, and when I turn I almost recoil at the intensity behind his stare. “Can you stop acting like we’re two old friends shooting the shit when you know good and fucking well you’re thinking the same thing I am.”
My mouth falls open and I force it shut, only to have it drop open again.
“I’ve hand my hands and my mouth all over every inch of that gorgeous body, Eve. You think I can’t read you? Know what you’re thinking about right now?”
I swallow hard. “What am I thinking about?”
“Same thing I am.” 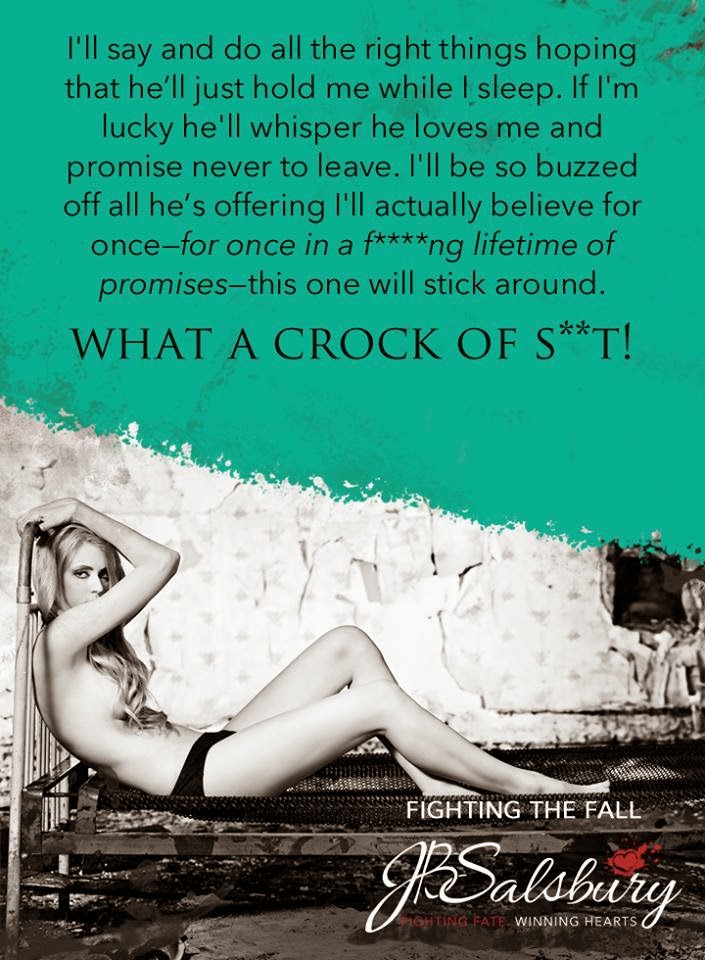 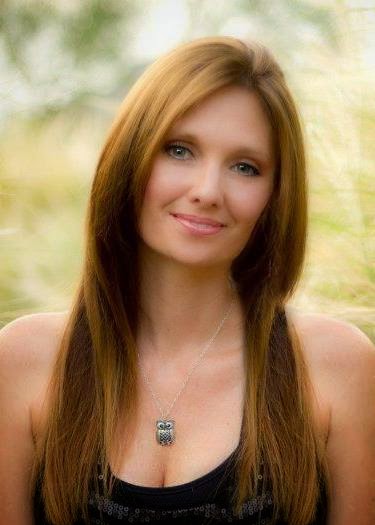 JB Salsbury, New York Times Bestselling author of the Fighting Series, lives in Arizona with her husband and two kids. She spends the majority of her day as a domestic engineer. But while she works through her daily chores, a world of battling alphas, budding romance, and impossible obstacles claws away at her subconscious, begging to be released to the page.
Her love of good storytelling led her to earn a degree in Media Communications. With her journalistic background, writing has always been at the forefront, and her love of romance prompted her to sink her free time into novel writing.
Fighting for Flight, Fighting to Forgive, and Fighting to Forget are the first three novels in the MMA romance series. Fighting the Fall is due to be released November 2014. For more information on the series or just to say hello, visit JB on her website, Facebook, or Goodreads page.

a Rafflecopter giveaway
Posted by Give Me Books at 1:14 pm