Cover Reveal - Should've Been Us by Jess Bryant 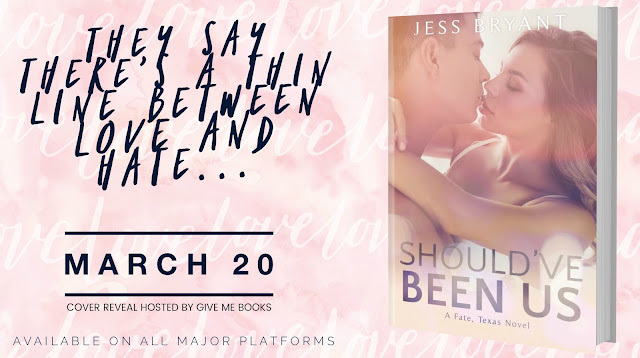 
It’s a destination wedding, Fate, Texas style, and the thermostat isn’t the only thing about to hit its boiling point.

Lulu Nichols has lost the love of her life.

Her best friend, Derek, proposed to someone else. He’s marrying someone else. And oblivious to her feelings, he’s asked her to play best man at his wedding. She can’t say no, not without admitting her secret and ruining everything, so she pastes on a smile and heads to Mexico to watch the man of her dreams get his happily ever after, even if it isn’t with her.

Connor Shaw is finally ready to claim the love of his life.

He wants Lulu. He’s always wanted her. Even though she’s slightly crazy and seriously delusional about her relationship with Derek. Connor is the one that brings out her fire and matches it with his own. He’s the one that drives her just as crazy as she drives him and it’s way past time for her to admit that all their fighting is really just foreplay.

Together they’re like gasoline and a match; a powder keg destined to blow, but oh how satisfying an explosion it will be.

But is their spark the kind that burns fast and then out? Is the heat going to Lulu’s head or is there more to Connor than she’s ever realized? Could they possibly be meant for forever or are they destined to always be a should’ve been?

“You should probably slow down there, dollface.” A deep voice slid over her, down her spine and made her shudder. With revulsion, she told herself. It was definitely revulsion. “Wouldn’t want to get drunk and admit you’re in love with the groom, would ya?”
The taunt sent a red-hot surge of anger boiling beneath her skin, turning her cheeks pink and the ice in her veins to lava as she spun to face the man intruding on her pity party. She felt a little light headed when she noticed how close he was standing but she attributed that to the alcohol in her bloodstream. It only pissed her off more that it proved he was right. She needed to slow down on the drinks or risk making a scene before the bridal party even arrived.
God, she hated when he was right.
Connor Shaw was a stupid, know-it-all bastard. He always had some smartass remark for her. Always. He’d been Derek’s sidekick since the sandbox days but Lulu did not consider him a friend. He was more of a nuisance, an ache in her head that never quite went away. Case in point, he was here now, standing far too close to her, wearing some sort of cologne that invaded her personal space and made her stomach twist, and looking smug as hell because he knew, knew, that every woman in the room was looking at him now that he had her attention.
She hated him. Despised him even. But she couldn’t blame the women in the room for staring.
He looked like an angel, all golden and gorgeous and he had an obnoxious habit of always managing to stand directly in the path of the sun. Even now, in the low light of evening, a spotlight of glowing orange beamed through the windows above, highlighting his dark blonde hair and making it look as if he were wearing a halo. Sometimes it seemed like the sun literally revolved around him.
It was annoying as hell.
So was that knowing twinkle in his dazzling blue eyes. Because he wasn’t just ridiculously good looking, he also knew he was ridiculously good looking which made him just about the biggest kind of asshole on the planet in her estimation. He knew the effect he had on 99% of women and the fact that she fell into the 1% that didn’t go ga-ga over him seemed to give him some weird sort of enjoyment, which only made him more infuriating.
“I mean, unless that’s your plan.” He leaned an elbow against the bar beside her, edging even closer so that she had to force herself not to pull away, to put more space between them, because she knew he’d take her retreat as a win in their never-ending game of dare. “Liquid courage?”
“Go away, Shaw.”
His head tilted slightly as if he’d expected a different response, “Drowning your sorrows then? Have you finally admitted to yourself that you and Dare were never meant to be?”
Her jaw clenched because, as per usual, his assumption hit far too close to home. She attributed Connor knowing so much about her to the fact that they’d grown up together. He’d always been there, on the edges of her friendship with Derek, watching. Judging. He saw parts of her that she’d thought were well hidden from everyone, even Derek, especially Derek, but somehow Connor had seen her infatuation with their friend and he seemed to take absolute joy in calling her out on the stupidity of it.
“I said, go away.” She slipped her hand around the glass in front of her without looking at him but a big, warm, roughly masculine hand closed over hers, stopping her short.
Her breath caught at the contact and she silently cursed herself for the physical reaction. It had been too long since anyone touched her. Anyone. It didn’t have anything to do with this man no matter how gorgeous he was. It was the alcohol and the moroseness that had overtaken her at the thought of Derek getting married.
Derek. Married. To someone else.
Her blood chilled and she pulled her hand away from Connor, carefully, so as not to spill the liquid in her glass. She glared at him when he frowned and his eyebrows drew together. He was looking at her strangely, in a way she couldn’t place and she glanced away before he saw something else she didn’t want him to see.
“Just… slow down on the drinks, okay doll?”
“Don’t call me that.” She instantly flinched.
“Tell me you’ll slow down, at least until dinner is served and you put some food in your system and I won’t call you that again.” His blue eyes were serious and she felt something inside of her begin to splinter.
Was he actually trying to take care of her? This man that taunted her constantly? That set her every nerve ending on edge? Was he trying to make nice for once? Because he knew this must be hard on her?
She nodded, “Okay.”
He gave her a small, cautious smile, “Okay.”
“Okay.” She tipped her drink at him.
“Okay.” He said again and she rolled her eyes because she knew he’d do this all night if she let him get away with it.
“You can go now.” She shooed him away, “Go find someone else to play your mind games with, Shaw.”
“But playing with you is so much fun.”
She groaned, “If you stick around, I’m definitely going to need another drink.”


Jess Bryant is an avid indoorswoman. A city girl trapped in a country girl's life, her heart resides in Dallas but her soul and roots are in small town Oklahoma. She enjoys manicures, the color pink, and her completely impractical for country life stilettos. She believes that hair color is a legitimate form of therapy, as is reading and writing romance. She started writing as a little girl but her life changed forever when she stole a book from her aunt's Harlequin collection and she's been creating love stories with happily ever afters ever since.

Jess holds a degree in Public Relations from the University of Oklahoma and is a lifetime supporter of her school and athletic teams. And why not? They have a ton of National Championships! She may be a girlie girl but she knows her sports stats and isn't afraid to tell you that your school isn't as cool as hers... or that your sports romance got it all wrong.

For more information on Jess and upcoming releases, contact her at JessBryantBooks@gmail.com or follow her on her many social media accounts for news and shenanigans.

a Rafflecopter giveaway
Posted by Jo Webb at 8:00 am