She was supposed to be my forever.
Instead, I became her worst enemy.

I fell for the one girl I could never have…
And it destroyed us both.
I did a bad, bad thing.
But she isn’t exactly innocent either.
When I’m faced with the ultimate choice – Let her die or save her – I grab her and run.
She calls me a monster. The devil himself.
No one will take her from me.
She’s mine to punish.
Mine to keep… forever.

Note: This STANDALONE novel contains disturbing content that may be offensive to some readers. No Cliffhanger. Book 4 in the Savage Men Series.

He rolls his eyes. “We’re stopping, sugar, whether you like it or not.”
I purse my lips in annoyance. “Don’t call me that.”
I’m not fucking sweet, and he knows it.
With a smile that would make all the girls fawn, he looks my way, and says, “What’s that, pumpkin?”
I cringe. “Pumpkin?”
Anything but that. Anything. I’d settle for bitch at this point as long as he doesn’t call me pumpkin. What is this, the fifties? God, this makes me wanna ram my head into the dashboard.
“Pie?” He nods his head, and I don’t get where he’s going at all.
“What do you want from me?” I ask with a raised voice.
A dark, delish laugh rolls off his tongue, one that makes me want to punch him in the throat.
“Nothing right now, cupcake,” he muses, grabbing my cheeks to squeeze them.
I swat him away, but my skin still prickles where he touched me. Goddammit, I don’t wanna feel this way around him. Anyone but him.
Goddamn him and his annoying nicknames.
“Maybe later, when I feel like roughing you up again …” He winks, and it’s one of those that instantly makes your heart flutter. Fuck.
“But for now, I think you could use some of that.” With that devilish smile, he directs my attention toward a billboard hanging high above the diner that says “Darla’s Delicious Pumpkin Pie!” and my mouth begins to water.
So that’s what he meant.
I stare at it for a second before realizing he’s still watching me instead of the billboard, probably trying to gauge my reaction.
“Hungry?” he asks, lifting a brow.
I clear my throat, and say, “No, we don’t have time for that—”
He takes an instant left turn, and if it wasn’t for this seat belt, I would have flown out of my seat. With screeching tires, we come to a stop on the parking lot. My hair is a mess and so is my heart rate. On his face is an even bigger grin.
“I’ll decide what we have time for,” he says with a smug face as he takes the keys from the ignition. “Time for food.” 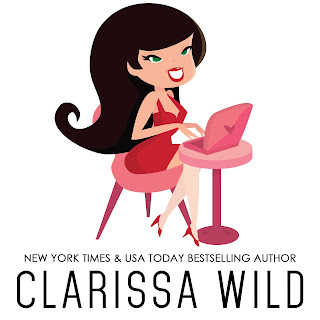 Clarissa Wild is a New York Times & USA Today Bestselling author of Dark Romance and Contemporary Romance novels. She is an avid reader and writer of swoony stories about dangerous men and feisty women. Her other loves include her hilarious husband, her two crazy but cute dogs, and her ninja cat that sometimes thinks he's a dog too. In her free time she enjoys watching all sorts of movies, playing video games, reading tons of books, and cooking her favorite meals.

Want to get an email when my next book is released? Sign up here to receive 4 FREE short stories: http://eepurl.com/FdY71