Straight from the mind of a forensic psychologist comes an addictive series of betrayal, lust, revenge, and murder. These doctors earned their degrees from the dark side. The Doctors of Darkness e-book bundle contains the first three books in the series: Daddy Darkest, The Hanging Tree, and The First Cut.

Bury your secrets. Bury them deep...

A month after her high school graduation, small-town-girl Samantha "Sam" Bronwyn boards a plane with her best friend, Ginny. Destination: San Francisco. But when Ginny disappears inside an airport bathroom wearing Sam's letterman jacket, it doesn't take her long to figure out she was the intended target. Alone in a strange city, Sam's on a run for her life--drawn into a dark past she never knew existed. A past where secrets aren't all that's buried and where revenge comes at the highest price.

Who is Sam really--and who can she trust? The mysterious stranger in 4A who secreted a gun in his backpack? The guilty ex-con? The disarming FBI agent? Her own mother?

Only one thing is certain. Someone is after her. Someone who knows more about her than she does. Someone who wants to teach her a hard lesson: There are worse things than murder.

On her thirteenth birthday, newly orphaned Evie, witnesses a brutal attack at the hanging tree. She wakes the next morning on a bus to Los Angeles, dazed and bruised and desperate to remember. Her best friend died that night--she's sure of it. But there's no body, no crime scene, and no witnesses. Twenty three years later, the whole night is still a blur. The murderer, a faceless, nameless man.

Fresh out of a stint in juvie, Butch kills a girl, strangles her. Twenty three years later, he walks out of prison a free man. But a haunted one, the ghost of his past at his heels.

When another body turns up at the hanging tree--a girl, strangled--Evie is certain her lost memory holds the key. Can Butch help her find the faceless man? Or is he hiding the darkest secret of all?

When "Love Doctors" Ian and Kate Culpepper are brutally murdered in their Carmel mansion on Valentine's Day, Ava knows it's karma. Because Ian's leaving her for perfect Kate four years ago had cut her bone deep. And then they had the nerve to show up here, on her turf. With their perfect house and their perfect daughter and their matching perfect smiles.

But Ian is far from perfect, and Ava owes a debt too. For the unforgivable thing they'd done together. The dark deed that severed their marriage in two. When Ava's name is found inked in blood at the crime scene, a reckoning seems inevitable. Someone knows what she's hiding. Someone sees what she's done. And karma is ready to collect its pound of flesh. 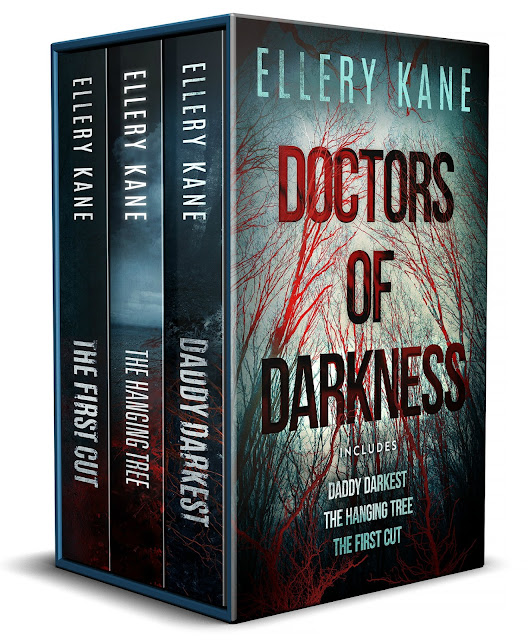 Forensic psychologist by day, novelist by night, Ellery Kane has been writing--professionally and creatively--for as long as she can remember. Just like many of her main characters, Ellery loves to ask why, which is the reason she became a psychologist in the first place. Real life really is stranger than fiction, and Ellery's writing is often inspired by her day job. Evaluating violent criminals and treating trauma victims, she has gained a unique perspective on the past and its indelible influence on the individual. And she's heard her fair share of real life thrillers. An avid short story writer as a teenager, Ellery recently began writing for enjoyment again, and she hasn't stopped since.