Because Ilsa Madden-Mills fell in love with her beautifully flawed characters in Very Wicked Things, she penned Very Wicked Beginnings as a prequel novella to the book, featuring the story of football star Cuba Hudson and ballerina Dovey Beckham.

Since May is Mental Health Awareness Month, all May proceeds from the sale of the novella will be donated to The Keith Milano Memorial Fund which benefits the American Foundation for Suicide Prevention (AFSP). www.afsp.org 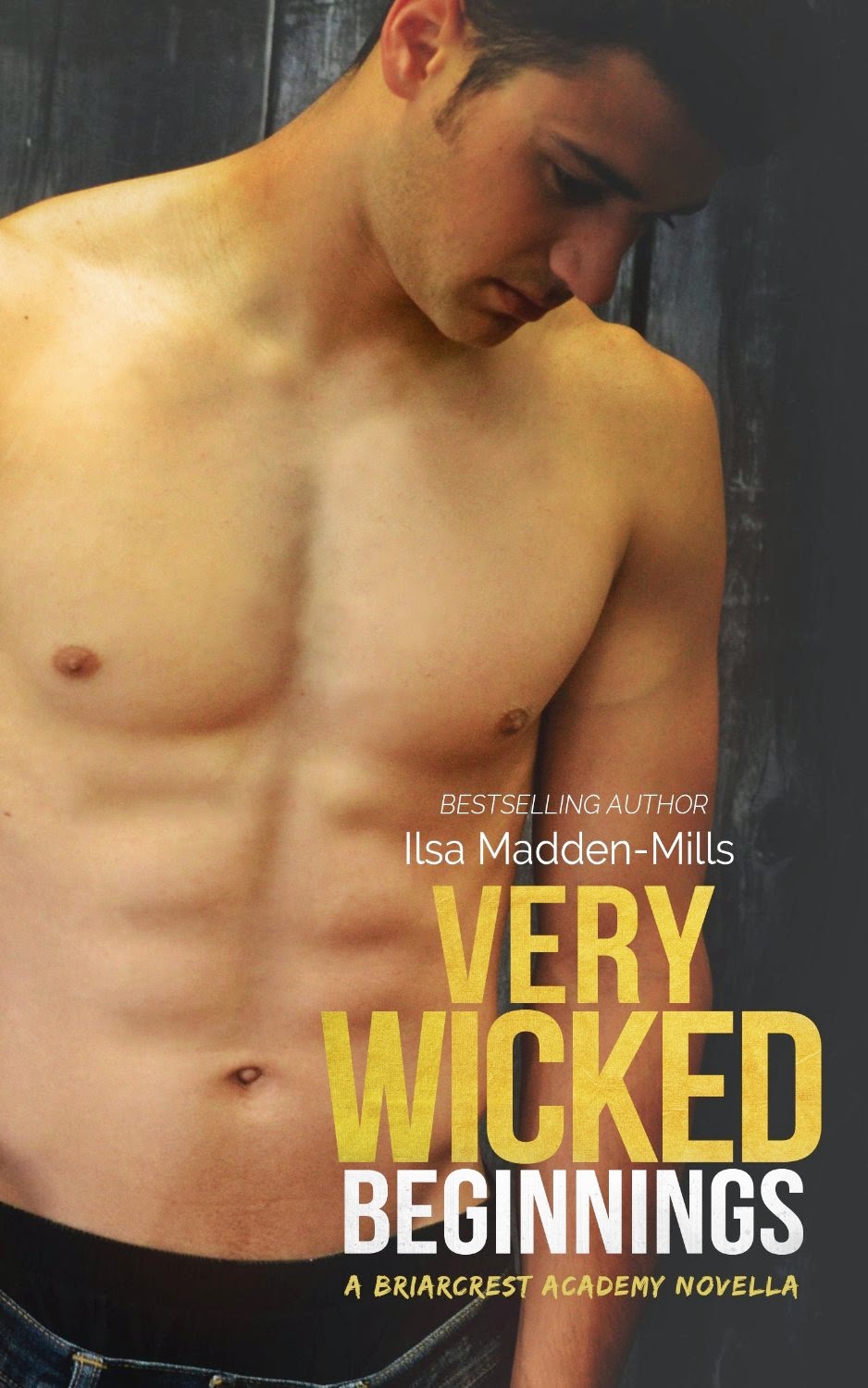 But, ESPN did rank me as a four-star recruit, calling me one of the best defensive players since Briarcrest Academy opened its esteemed doors. So yeah, with football and a stellar GPA, my future seemed good.

Then Dovey Beckham shows up in her short skirts and ballet shoes. Driving me insane. Making me want to beg for her attention.

But that wouldn’t happen, because Cuba Hudson didn’t beg for
anything.

She walked around BA like she owned the place, and most days she looked right through me…the one girl I couldn’t have.
So, of course, I made it my mission to claim her, to put her notch on my bedpost.

Because no girl can resist the Heartbreaker of BA.

Very Wicked Beginnings has me wickedly excited for golden boy, “Hollywood” Cuba Hudson of Briarcrest Academy.  We were first introduced to Cuba in Very Bad Things and I couldn’t wait to dive into Cuba’s story. In this prequel novella, readers finally see the “real” Cuba Hudson and are introduced to his love interest, Dovey Beckham, a ballerina, who has tiptoed and danced her way into Cuba’s mind.
Cuba Hudson is known as “Hollywood” around his peers. From the outside perspective, he had it all from money, popularity, athletic abilities, and a long line up of girls. But behind the perfect image, lies a man filled with guilt and sadness. His home life is filled with sadness since his mother is battling and struggling with depression.

Dovey Beckham is a ballerina. Her passion is to dance and has been given a scholarship to Briarcrest Academy. Unlike the rest of her peers, she does not come from money. She is the girl from the other side of tracks.

When Cuba spots Dovey for the first time, he is mesmerized by her beauty, elegance and the way she danced. Time stood still and all he saw was the ballerina who captured and helped erased sadness. Be prepared as Ms. Ilsa Madden-Mills gives us a taste of only the start the wicked beginnings of Cuba’s pursuit of Dovey. What will happen when two worlds collide? What secrets will be unraveled? 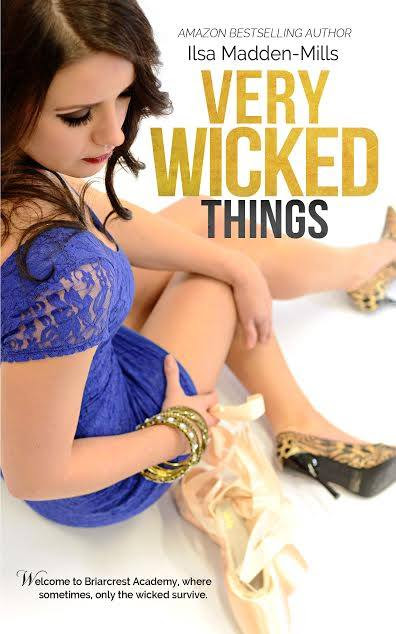 Born on the poor side of town…
Ballerina Dovey Beckham is a scholarship student at Briarcrest Academy, determined to prove she’s more than just a girl with the wrong pedigree. She does whatever it takes to succeed in her endgame, even if it means surrendering her body…but never her heart.
Until the day she meets him, and he rips apart all her well-laid plans. Suddenly, the girl everyone thought unbreakable might just shatter.
Born into wealth and privilege…
Cuba “Hollywood” Hudson is rich, spoiled, and a star football player. With his fast cars and superficial girlfriends, he lives the high-life, hiding his secrets from the world.
Until the day he meets her, and she offers him something he’s never tasted…love.
But once in a lifetime kind of love doesn’t come easy. When trust crumbles and doubts creep in, both will have to decide to either love or let go…forever.
Welcome to Briarcrest Academy, where sometimes, only the wicked survive.
ADD TO GOODREADS

So after I read Very Wicked Beginnings, I was thinking a cute romantic tale of Cuba pursuing his chase of Dovey in Very Wicked Things but Ms. Ilsa Madden-Mills had to put to a wicked abrupt halt to that. Of  course, she had to put her readers on a wicked emotional roller-coaster since this book is titled Very Wicked Things.  This book hooked me from the very first page and I was secretly at work trying to get my reading fix of Cuba and Dovey. Ilsa knows for a fact that  I was secretly trying to hide in my office so I can invest all my attention to Cuba and Dovey. I just want to tell Ilsa that you literally gutted my heart with Cuba and Dovey’s story.  Seriously, this book took my heart, twisted it around, tore it to pieces, and slowly taped it back together. Very Wicked Things was such an emotional, heartbreaking, heartfelt, and beautiful journey that I loved every bit of the ride that Ilsa took her readers on.

In Very Wicked Beginnings, we learned that Cuba’s mother has been battling with severe depression and that Cuba blames himself for his mother’s illness. In Very Wicked Things, a year has passed since Cuba and Dovey first met each other and we learn that Cuba humiliated Dovey in front of the school when he broke up with her. The Cuba for now is a big fat jerk. He ignores Dovey and doesn’t give her the time of day. Soon we learn that Cuba’s mother committed suicide and he blames himself for his mother and sister’s death.  He feels that he will only disappoint anyone who tries to love him and people are better off without loving him hence, he distances himself from Dovey. His reasonings may sound dumb but as someone who suffered and experienced lost, I can totally understand his sadness and his feelings of detachment.

Dovey literally broke my heart. Her childhood and upbringing had me in tears. She is a fighter and survivor and applaud her for her strength to LIVE and DREAM. While others may succumb and give up, Dovey did what she had to do rise above from being stuck in her situation.  What she lacked in money, she made up in intelligence and perseverance.  She made her dreams of becoming a dancer in a reality.

The sexual tension and chemistry between Dovey and Cuba had me going crazy!!! I was like WHY Ilsa are you torturing us!!!! I wanted to scream at Cuba and tell him to man up and claim Dovey. And as for Dovey, I must applaud her strength dealing with the whole Cuba situation. I just wanted to give her a big hug and say it will be okay.  Soon I found myself begging Ilsa just to give us a glimmer of hope for these two and when she did I was screaming YES...FINALLY!!! The emotional rollercoaster that Cuba and Dovey put me through made me demand that they get HEA! Hell they f*cking deserved one after all they been through. Both survived heartaches, loss and practically been to hell and back so they needed that fairy tale HEA.

Oh and as for the ending, I absolutely loved it. Yes, the ending made me over the moon happy! Ilsa did an amazing job in Very Wicked Things. She made you fall in love with all the characters and had your emotions invested in everyone. You couldn’t put down your kindle because you had to know how will Cuba and Dovey get their HEA.  Very Wicked Things was deliciously wicked and a must read!

Ilsa Madden-Mills is a loving wife and mother, a loyal friend, and a teacher. When all that is done, she writes. Obsessively.
She spent several years teaching high school English, but now hangs out at home with two small kids, a neurotic cat, and her Viking husband. She collects magnets and rarely cooks except to bake her own pretzels.
When she’s not typing away at a story, you can find her drinking too much Diet Coke, jamming out to Pink, or checking on her carefully maintained chocolate stash.
She loves to hear from fans and fellow authors.
Very Wicked Things is Book 2 of the BA Series.
Very Bad Things is currently available on Amazon, Barnes & Noble, and iBooks.

a Rafflecopter giveaway
Posted by Give Me Books at 10:27 pm