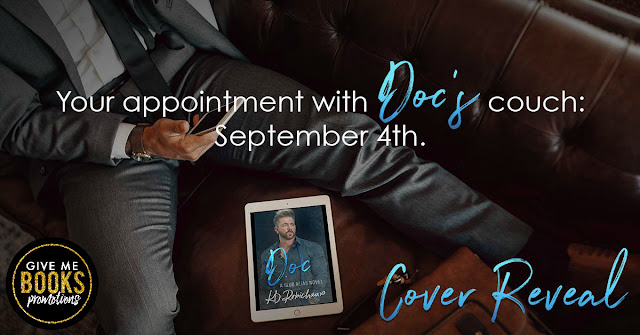 Dr. Neil Walker, M.D., M.F.T, Ph. D.
I’m not your average therapist. As the founder of Imperium Security—the cover for my mercenary team—I’ve dedicated my entire life to helping heal those who’ve had their power unwillingly taken from them and avenging the ones who didn’t survive.

A decade after creating the perfect team, I’ve now watched as every one of my brothers-in-arms has met and married their perfect match, the special women who were meant for them—because not just any woman is cut out to be the wife of a mercenary. And it was through one of these matches I finally met The One, the woman of my dreams, the one I’ve sworn to help heal and protect above all others.

Astrid Quill, Makeup Artist
It was only supposed to be for the weekend, but then all hell broke loose, and I went from just staying with Doc so my sister could have a worry-free romantic getaway with her honey, to living with him for an entire year.

Oh, boo-hoo, poor me, trapped in this amazing, state-of-the-art mansion with a dog who loves the hell out of me. And not trapped because Neil won’t let me go. Heavens, no. Neil is dreamy and a real-life hero, and he tries everything to help me step foot back into the world. It’s a self-imposed prison, because nothing good ever came of me being out in the wild.

I made a promise nearly a decade ago that I’d never let myself fall in love again. Love brought pain, both emotional and physical, and the last time I was in love, I barely escaped with my life. But I’m finding it harder to resist this magnetism between us, especially when he makes it perfectly clear he wants me and only me.

No, Doc isn’t your average therapist.
So is he the one man who can not only save me from my past, but also heal my heart?

Only available at the following
retailers until September 4

“Wanna play a game, Doc?” I ask in a creepy voice, mimicking the scary little fucker on the trike in the Saw movies.
“I never realized how much like Seth you are until today,” he replies instead, and a lazy smile pulls at my lips.
“My sister said since the day she met him that he’s like me but with a penis. I chose to ignore the fact that she then proceeded to have sex with that penis. I have enough psychologic damage to wonder why my sister fell in love with a man who reminds her of me,” I joke, and he shakes his head at that.
“Then I’ll choose to ignore the fact that I fell in love with a woman who reminds me of him with a vagina,” he replies, and I wrinkle my nose.
“Ew.”
“Right?”
“No, I mean the vagina part. Don’t call it that.” I stick out my tongue.
“Are you twelve, goddess? I’m a medical professional,” he points out.
“You’re a head doctor. Not a vagina doctor,” I argue, sneering the word.
He lifts a brow. “You’d be amazed how much the mind is affected by what’s between one’s legs, Ms. Quill.”

KD Robichaux wanted to be a romance author since the first time she picked up her mom's Sandra Brown books at the ripe old age of twelve. She went to college to become a writer, but then married her very own alpha and had babies. Putting her dream job on hold to raise her family as a stay at home mom who read entirely too much, she created a blog where she could keep her family and friends up-to-date on all the hottest reads. From there, by word of mouth, her blog took off and she began using her hard-earned degree as a full-time editor. When her kids started school, and with the encouragement from her many author friends, she finally sat down and started working on her first series, The Blogger Diaries, her own real-life romance. She's now published more than fifteen stories in many different genres of romance.