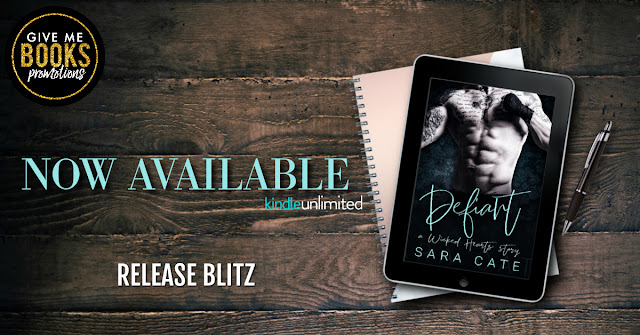 Hate is easy.
A hell of a lot easier than the alternative.

It’s my job to keep Wicked safe, which means getting my hands a little dirty sometimes. After I lost my best friend, I’m not pulling my punches anymore. So it’s hate that helps me win every fight and close every case.

But now the past is coming back to haunt me, and I refuse to be cornered. As for the girl who just moved in next door, hate is my only option, and I won’t go down without a fight.

Ten years ago, he ruined my life.
Now, it’s my turn to ruin his.

I didn’t plan to move in next door to Rafe Nolan—especially after what he did to me and my brother. But now I have the opportunity to make his life as miserable as he made mine.
And for a man who is so tortured, this should be easy.
But there is a dark secret behind all that pain of his that draws me in. He’s trying to hold his power over me, but I can see him losing control.
I can use his secrets against him, but as I start falling for him, I know this is one fight I am going to lose.

His hand floats away from my neck, and he places it against the door, caging me in. His lips close in on the space beneath my ear, but instead of kissing me, he takes a gentle bite of my skin. Moisture pools between my legs.
When I feel the rough grip of his other hand on my hip, I realize that I’m putting myself in the hands of my own enemy. No matter what he said about me being his family, the love between us is gone. If he wanted to hurt me, he could. Somehow, that realization only intensifies my arousal. It’s like I want him to hurt me.
A high-pitched whine escapes my lips when I feel his cool breath on the wet skin of my neck. My hands stay obediently behind my back, even when he lifts my knee to position himself between my legs, grinding his hips against mine.
He still hasn’t kissed me, but he keeps up the nibbling on my neck and the rough pinches of the flesh of my ass. My mind is screaming at me to wake up and realize that he’s only teasing me. He’s fucking with my head, but my body refuses to listen. Currently, my body is willing to shed these clothes, drop to my knees, and let him be as rough as he wants to be. In fact, I’m pretty open to him being as rough as he can be—which is the first time I’ve ever felt like that.
“Let’s go in my apartment,” I chirp, but he doesn’t respond. The hand he held planted against the door slides down, over my shoulder and brushes over my thin shirt. It doesn’t stop as he reaches the hem and snakes his fingers underneath. Feeling his skin against mine makes me gasp, and I wait for his reaction when he finds out that this backless blouse does not allow for a bra.
If he doesn’t pull me into one of these apartments, I’m going to lose my mind. I’ve never wanted hate sex so much in my life.
“Rafe,” I beg, my voice husky and lust filled. “Let’s go into my apartment.”
Tilting my hips up toward him, I try to maneuver myself against him at just the right angle.
Iit all becomes too much, and my wrists ache from being pinched between my body and the door, so I pull them out and reach for his belt buckle. At this point, I’m not above doing it in the hallway. Everyone’s asleep anyway.
As soon as my fingers touch his pants, he pulls away, glaring at me like I’ve offended him.
“You broke the rules, sweetheart,” he growls at me, his head tilts down so he’s watching me through a hooded brow.
“What?” I breathe, but before I can move, he’s putting the key into his lock and disappearing into his apartment.
“Goodnight,” he says in a teasing tone before the door slams.
What. the. Fuck.

Sara Cate writes contemporary romance about bikers, bad boys, hunks, and softies--all rolled into one. She has a soft spot for redemption stories and forbidden romance.

You can find more information about her at www.saracatebooks.com.