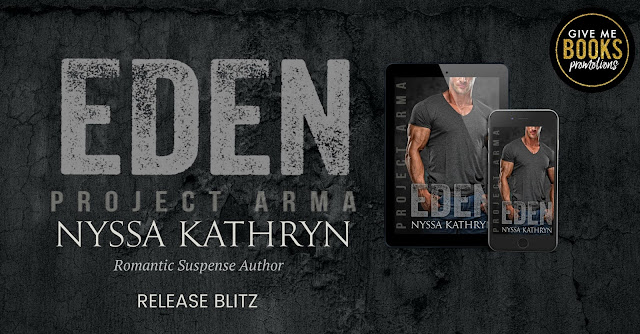 She thought he’d be happy to see her…

…but all she found was anger.

Why did Eden hate her?

The memory of that day haunted her. Eden told her to stay at the safe house while his team went on their mission. Then she found out he was being setup. Shylah didn’t have a choice, she had to do something.

It was a risk.

And she paid dearly.

Eden and his team had aborted just in time. They lived to fight another day. Fourteen months later and Eden was surviving. There was only one question on his mind, who had betrayed them?

Could it have been Shylah?

In the complex world of international espionage and war, love is often a causality. What will it take for her to conquer the mistrust and win him back?

You’ll adore this military romance, because the truth can be hard to believed when all you’ve know are lies.

"Just say it, Eden. I mean, you've been saying it for over a year to all your buddies, so how about now? Project Arma. You think I was part of the project. That I knowingly injected people with experimental drugs that could kill them. That I killed tons of soldiers while figuring out the perfect super soldier concoction. Getting close to you was part of my evil plan. Tonight, I must have been meeting my partner to discuss how we were going to trick you this time." Standing, Shylah crossed her arms. "Is that correct? Did I sum up everything you believe about me, Eden?"
Pushing his chair back, Eden stood in front of Shylah, towering over her. For the first time since she arrived in Marble Falls, his size didn't intimidate her. There was nothing this man could do to hurt her that was more painful than his low opinion.
"If you didn't hide things from me, I wouldn't have to guess what the hell was going on."
Done with the conversation, Shylah marched to the door and pulled it open. "Well, you guessed wrong."
Eden remained where he was for a moment, leading Shylah to wonder if he would leave. She knew full well that if Eden didn't want to go, then she wouldn't be able to force him. Then he started moving toward the door. Shylah didn't know whether to be hurt or happy that he was leaving.
"Did it ever occur to you that the thing I'm hiding is to protect you? To protect us until I'm ready to share?"
Stopping in his tracks, Eden turned his head. Some of the anger had faded, and resignation shined through. "There is no us, Shylah. You've made damn sure of that."
Then he was gone.
Shutting the door behind him, Shylah leaned against it and scrunched her eyes shut. The pain in her chest was crippling. Was that true? Had she damaged them with her secrets to the point of no return?
She had believed that they were strong enough to get through anything. Maybe they'd always been more fragile than she'd thought.

Nyssa Kathryn is a romantic suspense author. She lives in South Australia with her daughter and hubby and takes every chance she can to be plotting and writing. With a background in teaching, Nyssa finds that she can let her mind wonder in the writing world. Always being one to read and write when she should have been working, Nyssa decided to take the leap and make writing her career.

Nyssa has always been an avid reader of romance novels. As a teenager she would lose herself in Young Adult and Contemporary Romances. As she got older her interest moved onto the romantic suspense genre. It was from here that she started dabbling in writing. Nyssa wrote her first novel in 2017 but didn't start publishing her work until three years later. Working in the industry has solidified Nyssa's love for all things romance.