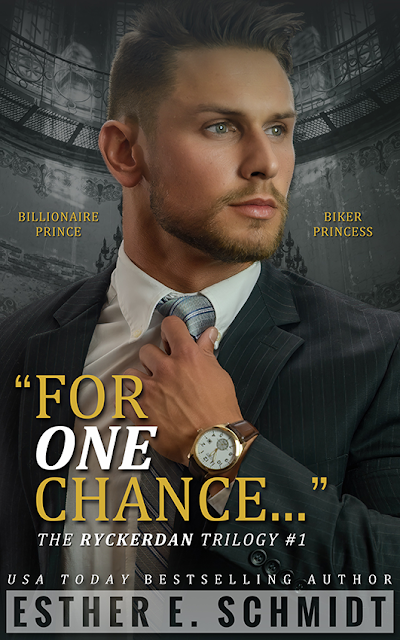 FOR ONE CHANCE
Release Date: June 1, 2021
Windsor - She’s intriguing. Smart, brilliantly beautiful. She knocked me into awareness when I almost bumped into her. Anything but mundane, she’s a biker princess and a special agent trained to solve criminal cases. I guess she’s not the only one knocking the wind right out of me when my life takes an unexpected twist.
Linnette - Handsome. Kind. And let’s not forget those tantalizing abs, making him irresistible after he almost ran into me. A one chance meeting. They say a first impression matters, and with us it definitely did. And of course the first guy who jolted my heart into awareness becomes a case I need to give my full attention to. Can you spell disaster? Because I can, in full detail, when his family brings death to my doorstep.
For One Chance is book one in a royal romance trilogy set in a biker world where mafia collides with justice. 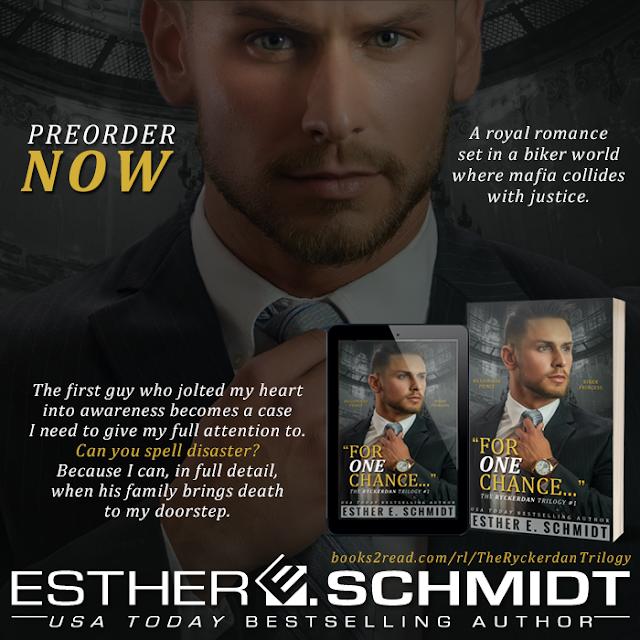 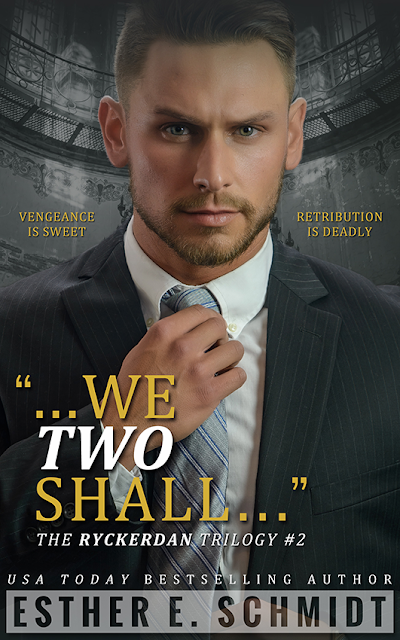 WE TWO SHALL
Release Date: June 15, 2021
Windsor - The load of information about my background is hitting me full force. How does one deal when everything you thought was true turns out to be a lie? There’s only one solid pillar I trust in my life right now; the woman who holds my heart. And it’s exactly why her life hangs in the balance if she stays by my side.
Linnette - Some say love is easy. They’ve clearly never had to face not one, but two mafia families fighting to put their blood on the throne. A war has been declared, and we have to save not only the man who holds my heart, but a whole country along with it. All is fair in love and war, until your life is hanging on by a thread.
We Two Shall is book two in a royal romance trilogy set in a biker world where mafia collides with justice.
ADD TO GOODREADS 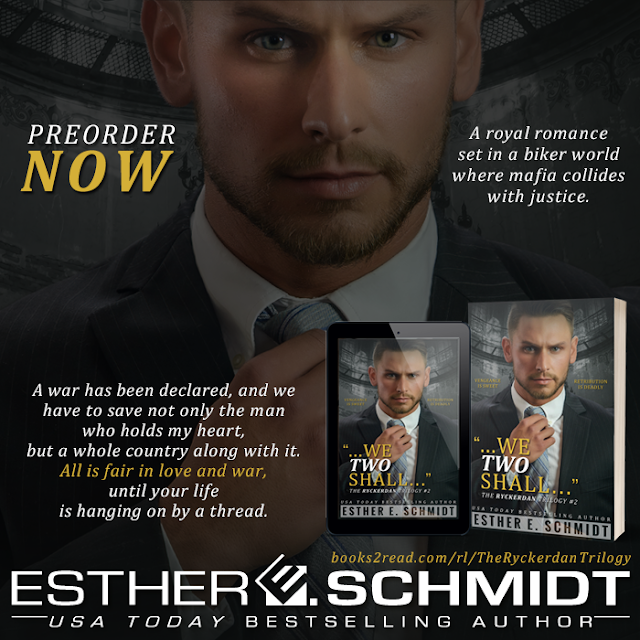 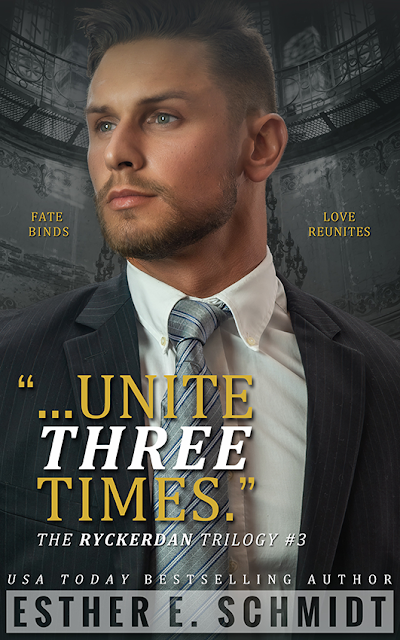 UNITE THREE TIMES
Release Date: June 29, 2021
Windsor - The mob has put the life of the woman I love in the balance too many times. Yet now, they’ve managed to blindside all of us along with it. The will to fight the mafia has turned into full blown hatred along with the need for justice to prevail. But will it be in time to save lives or will plans forged for decades take a spin and leave all of us to take a choice between life or death?
Linnette - Who knew life as a civilian would be more hazardous than as a special agent? I won’t hesitate to put my life on the line when it comes to my future husband, but his is not the only life on the line in a fight for the throne. There’s also more at stake than a kingdom. Will we find the strength to grab hold and fight or will our future fall apart?
Love, family, loyalty; united as one or lost forever.
Unite Three Times is book three in a royal romance trilogy set in a biker world where mafia collides with justice.
ADD TO GOODREADS 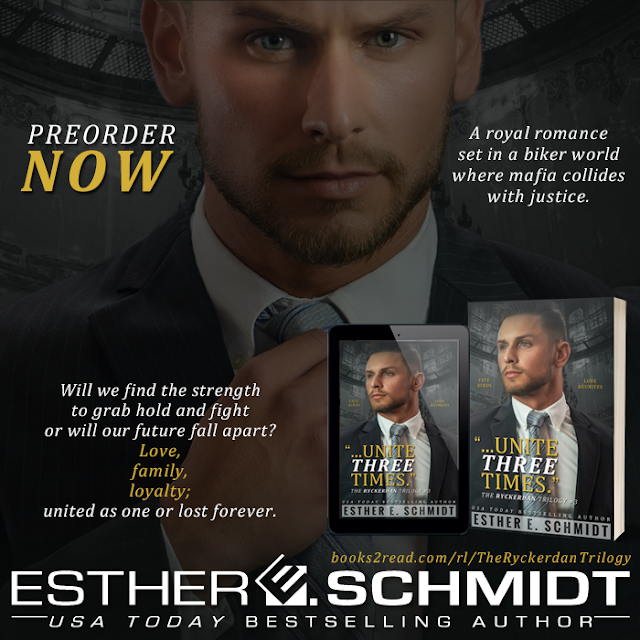 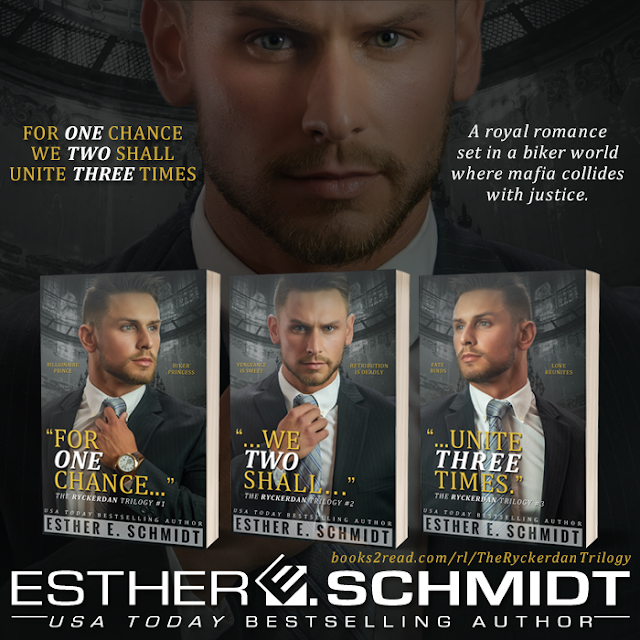 AUTHOR BIO
Esther E. Schmidt is an USA Today bestselling author who loves to write MC (biker) series, Mafia Romance series, PNR series, contemporary romance series, and more. She's a graphic designer that also loves to write. She released her first series "Areion Fury MC" in October 2015. Esther lives in The Netherlands with her family, three daughters, a dog, and a crazy iguana. She loves to write about bad boy Alphas with a heart for only one woman. To make it a bit interesting, that woman needs to be a badass herself.
AUTHOR LINKS
WEBSITE
FACEBOOK
TWITTER
INSTAGRAM
PINTEREST
BOOKBUB
Posted by Give Me Books at 7:50 am