Blog Tour - Save Me From Me by Erika Ashby

Synopsis
Dani refuses to lose another parent due to her absence from their life. After pulling herself back together following the death of her father, she moves back to her childhood town to live with her mom. She’s slowly pulled back into the lifestyle she worked so hard to get away from ten years ago. She accepts that this is the life she has always been destined to live. Getting a job at the store down the road and hooking back up with her first love Gage, seems to be the logical way to go…that is until Holden Reynolds shows up in town.
Now that Holden is finally back home from the Navy he plans on following in his father’s footsteps. Still trying to move on from the one woman who had his heart, he busies himself in work and returning to the country boy lifestyle he’s always loved. The best way to get over someone is to get under someone, right? That’s his mindset as he travels town to town with his job perfectly content with being a rambling man…that is until he meets Danielle Brooks.
When Dani isn't leaving and Holden isn't staying will they be able to keep themselves from getting too attached? Or will they be just what each other needs to cut all the strings that have them bound?
“You can’t save me from me, Holden.” –Dani 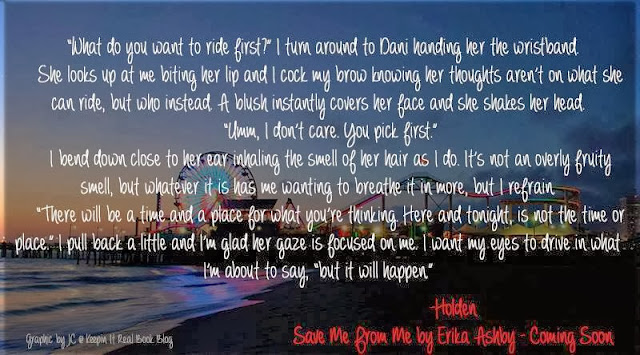 Save Me From Me by Erika Ashby felt like I was watching a Lifetime movie. This book is one of those cute and sweet stories but with a mix of sass and angst thrown into the mix. If I had to describe this book it’s a modern day country romance story. It is one love story where you were left rooting for Holden and Dani to get their happily ever after. With a title, Save Me From Me, readers are left with the questions: Is it wrong to settle? Can love really save us?

Danielle Brooks, aka Dani, left her small town life once she graduated high-school leaving behind her ex-lover, Gage. Escaping to the city, Dani hoped to make a new life where she could leave her small town roots in order to find herself. As ten years passed, she feels  obligated to move back home to be closer to her mother since the passing of her father. She can only be described as one fierce, tough independent free-spirited country girl, who isn’t afraid to call out anyone’s bullshit. In other words, she is one girl whom you don’t want to mess with.  But behind the tough facade, Dani still is a hopeless romantic. She is looking for the one who will challenge and make her heart skips a beat.

Moving back Dani finds herself falling back to old routines of her small hometown life. Her old flame, Gage still holds onto the notion and hope that they will get back together. As much as Dani loves him, the love she has for him can only be described as a love for a best friend. Gage will always have a special place in her heart but when she left him 10 years ago, she wanted a LOVE that doesn’t feel like settling. Settling is one thing Dani wants to avoid. She doesn’t want to feel trapped and tied down.

When Holden Reynolds, a former Navy comes and moves into a town for a couple of months for a job site, he sets his eyes on Dani. Both Dani and Holden have this instant attraction to one another. What started off as playful flirting and teasing, Dani and Holden soon find themselves in a relationship. Knowing each other for a short time, they instantly formed a strong connection and bond. They understood each other’s wants and needs. Without having to say much, their chemistry was palpable. They soon find themselves falling in love with each other but with old exes and family obligations standing in their way, can their love be enough?

Save Me From Me is the first book I read from Erika Ashby and I was not disappointed. Ms. Ashby left me rooting for and understanding the two men in Dani’s life since both men loved her so much and would do anything for her. Save Me From Me is not only a girl finding love but its also about finding yourself and letting go of the past. Maybe we don’t have to look far to find oneself..maybe the answers to our happiness can be found in a place we call HOME surrounded by our loved ones and maybe love can really save us.

So if you are looking for a fun, sassy and romantic story, look no further and read this book.

♥♥♥♥♥♥♥♥♥♥♥♥♥♥♥♥♥♥♥♥♥♥♥♥
Excerpt
Holden I really don’t want to quit swinging. But the fact that I’m starting to get a boner has me thinking I really need to slow down, get off the swing, and adjust myself without Dani catching me. Once the swing comes to a stop, neither happens. Instead, Dani leans back and looks at me. Her blue eyes shining bright, I watch her face, as she seems deep in thought. And then… she smiles. A full blown, heart pounding, boner-inducing smile that has me wanting to turn this into some kind of kinky sex swing. “What?” I smile back. She’s contagious and I have a feeling that I don’t ever want to find the antidote. I don’t need to be getting attached, but it’s not like I live in a different state. I mean my home home, the one I grew up in, is only two hours away. People make it living twenty hours away. Yes, I work different places all the time, but it doesn’t mean anything. In all reality, I’m still searching for my place to put down my own roots. I don’t have to go back home one day. With my job, it’s almost expected that I never do. It’s not like my dad visits as much as he should, so why should I have an actual home if I don’t ever get to see it or enjoy it. “I just really like hanging out with you. It’s been a while since I’ve truly been happy. So, for that, thank you.” And with that little thanks said, she bends down and shows me her gratitude by placing her lips on mine. She tries to make it short and sweet, and pulls away not knowing if she should fully press on, but I quickly pull her tightly back in with one hand on the back of her head and the other holding her cheek. I open my mouth, encouraging her to do the same. Her tongue soon finds mine. I haven’t legitimately made out with a girl in what seems like forever. Yes, I kissed the girls that I’ve slept around with, but I have never felt anything, because I’ve never felt anything towards them. I haven’t been friends with them or haven’t known anything about them, so it’s been easy. I’ve had no trouble keeping everything shut off. But with Dani, I feel. And I like feeling. “Wait, I can’t do this.” She pulls back from me trying to free herself from my hold. “Why not?” I ask as confusion sets in. “Because, I’m trying not to get attached to someone. And I’m already doing that with you.” Grabbing her face in my hands, I force her to look me in the eyes as I ask her, “Do you want to be with me, Dani?” “Holden, it doesn’t matter what I want. I gave that up months ago.” Deep sadness fills her eyes. I’ve finally found this sweet woman who makes my head all crazy, stupid with thoughts of things I believed I’d never have, and she has the weight of the world on her shoulders. She doesn’t have to say it, but I can tell that she feels like everyone else in her life has to come first. The guilt that she won’t let go of is heavy enough, let alone this extra burden that she’s placed upon herself. “What you want matters to me, and it should matter to you.” “You don’t even live here. One day you’ll be picking back up and moving along to your next destination.” Not only is she worried about the life she has here, she’s worried about the life I’d have away from her. There are ways around obstacles, and if this whole thing with us is going to be a giant sized puzzle, then I’m going to solve it. If both people want something bad enough, then there is a solution for it.
♥♥♥♥♥♥♥♥♥♥♥♥♥♥♥♥♥♥♥♥♥♥♥♥

Facebook ♥ Goodreads ♥ Twitter
Being born an "Army Brat", Erika Ashby has been residing in Oklahoma the last 10 years finally putting an end to the nomad tendencies she had grown accustomed to. She's a happily married woman who has 5 kids between her and her husband. She has an insane passion for music and embraces her Inner Groupie any chance she has. It wasn't until the age of 29 that she realized she also had a hidden passion for reading; before then she claimed to have hated it. Six months after unlocking that deep desire she never knew she held, she turned the key to another chapter of her life which has become the desire to write. And the rest is still history in the making.
Giveaway
a Rafflecopter giveaway
Posted by Give Me Books at 10:23 pm