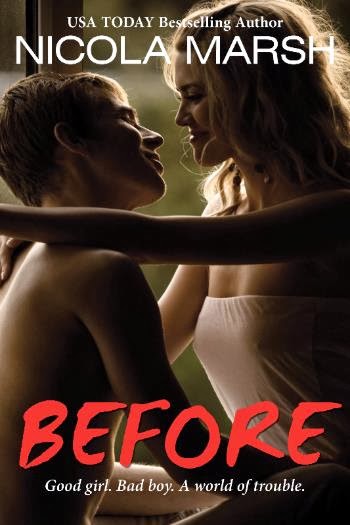 Being a small town girl isn’t so bad. Unless Mom’s the town joke and I’ve spent my entire life shying away from her flamboyance. College in Las Vegas should be so much cooler. But it’s not. Bad things happen. Real bad.

So when my brother Reid offers me an all-expenses paid vacation to Australia for a month, I am so there. Discounting the deadly snakes on the outback cattle station, I should be safe.

Until I meet Jack.

Jack defines bad boy and then some. He’s big, buffed, bronzed, and hotter than any guy I’ve ever met. His sexy Aussie accent makes me melt. And the guy can cook.

But he’s my brother’s new bestie and he lives on the other side of the world. There’s no future for us.

USA TODAY bestselling author Nicola Marsh writes flirty fiction with flair for adults and riveting, spooky stories for teens.
She has published 43 contemporary romances with Harlequin, Entangled Publishing and indie, and sold over 5 million copies worldwide. Her first mainstream romance BUSTED IN BOLLYWOOD was nominated for Romantic Book of the Year 2012. Her first indie mainstream romance, CRAZY LOVE, was a 2012 ARRA finalist and Barnes & Noble bestseller.
Her debut young adult novel, a supernatural thriller BANISH, released with Harlequin Teen August 2013, and her YA fantasy series kicks off with SCION OF THE SUN, November 2013, with Month9Books.
Her debut new adult novel, BEFORE, releases December 2nd, 2013.
She’s also a Waldenbooks, Bookscan and Barnes & Noble bestseller, a 2013 RBY (Romantic Book of the Year) and National Readers’ Choice Award winner, and a multi-finalist for a number of awards including the Romantic Times Reviewers’ Choice Award, HOLT Medallion, Booksellers’ Best, Golden Quill, Laurel Wreath, More than Magic and has also won several CataRomance Reviewers’ Choice Awards.
A physiotherapist for thirteen years, she now adores writing full time, raising her two little heroes, sharing fine food with family and friends, and her favorite, curling up with a good book!

a Rafflecopter giveaway
Posted by Give Me Books at 2:01 pm