Deleted Scene & Review - Fighting to Forgive by J B Salsbury 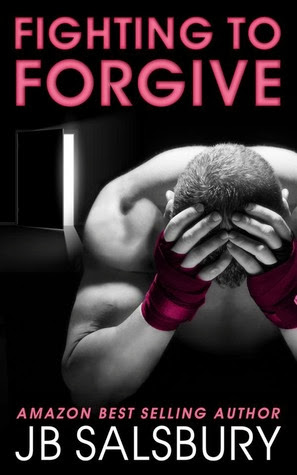 What do you do when everything you avoid, turns out to be exactly what you need?

Easy and predictable, just the way he likes it, Blake Daniels flies through life the way he burns through women: on his terms, no regrets.

With his fighting career in full swing, he's on the threshold of title contention. But when his training is compromised by injury, the stakes grow impossibly higher. The rage that fuels his punches also chips away at his focus, and he risks losing everything he cares about.

He won’t let that happen. Not again.

Layla’s through with men. After a marriage that never should’ve happened, she hopes to reclaim the pieces of the woman she lost years ago.

Emotional abuse has left her insecure and terrified. A master at faking what she’s not feeling, she masks her self-doubt in false confidence.

She’ll never let another man hurt her. Not again.

Chased by shadows of the past, Blake and Layla know what they don’t want, but their hearts have a different plan. As a web of lies and betrayal threatens to destroy them, they’re forced to make a choice.

Is love enough to heal even the deepest wounds?

Or will they be left Fighting to Forgive?
ADD TO GOODREADS

Five HUGE Freaking Stars
I was so beyond thrilled when JB Salsbury gave me a copy of this book to read. I absolutely loved the first book, Fighting for Flight. I started reading this immediately, the minute it downloaded on to my kindle. I fell in love with Layla and Blake's story. JB, knows how to keep you turning the pages, that's for sure. I did not want to put this book down.


After escaping from her nightmare of a marriage, Layla and her daughter, Axelle, moved from Seattle to Las Vegas to start a new life.  She has a crappy apartment and a crappy car, but she's finally free. As luck would have it, Layla lands a job with the UFL, where Blake happens to be a fighter.


Blake is brusque, brash and tells it like he sees it. After growing up with a controlling parent who forced him into military school, Blake is living on his own terms. He is instantly drawn to Layla but he's a fuck 'em and chuck 'em kind of guy. He doesn't want to get involved with her, but fate has other ideas.


When both of their past issues collide, will they fight to forgive?


I finished this book, no I take that back, I devoured it quickly. I was so drawn into this spectacular book. Blake is a foul mouthed, sexy as hell Alpha male. Layla, oh Layla, I fell in love with her too. Her back story along with Blake's broke my heart. These two wounded souls truly made a great pair. I highly recommend this book, read it and you'll be saying, "Remy who?"

Deleted scene cut from the prologue

The underground room, lit only by military flashlights, swirls with the smell of blood and sweat. Shirtless marines in desert fatigues stand in a circle. Like some fucked-up game of GI Joe, their expressions twist with the fuel of adrenaline and release as they cheer on two fighters.

Up top, in front of our superiors, we have to put on the faces of brotherhood, partners in arms. But down here, in the underground fight club, our true personas are brought to life.

Training for a fight in another country against an enemy we can’t see. We push our bodies past their limits, but never feel the satisfaction of combat. Husbands away from their families, boys ripped from their homes. But nothing washes away resentment and hostility like a good bare-knuckle fight.

“You up next?” Sergeant Bo Conner, my best friend from military school, is at my side.

“Takin’ on Casper?” There’s a smile in his voice.

I roll my shoulders, the humidity in the air along with the heat making my muscles loose and ready. “Fuck yeah.”

I’m looking forward to taking on the fucker who’s been taunting me for years. Always giving me shit about my dad being a General and how, if it weren’t for him, I’d be nothing but a lowly private.

He’s probably right. I’ve found every way to screw up since I landed my ass in military school at fourteen. This is my chance for payback. Time to put that weasely fucks jokes to an end.

I’ve been warned if I get caught running this club again I’m doing time in The Brig. I say bring that shit on. Can’t be worse than being a Marine against my will.

A submission from one of the dudes fighting sends the crowd into a frenzy. The room explodes in a mix of cheers and boos. The fighters shake bloodied hands, and smile with split lips.

Bo smacks me on the back. “You’re up, brother.”

I spear Casper with a glare, and make my way into the middle of the human fight ring. His eyes send me a fuck-you message of thier own as we face off.

“Fight!” The word flies from someone in the crowd.

Not one for subtlety, I jab Casper with a hard right. He blocks and returns a rib shot that has me gasping. The burn fuels my desire for more. I fake out with a left and hurl my right fist to connect with his jaw. He groans and stumbles back.

Damn, that felt good. Fighting is the only thing that has felt good since before I left home. Before I was forced to give up the only thing…fuck. Not going there. I drag my head back to the fight.

We circle each other, throwing punches, and taking them. Casper’s arms drop with fatigue, opening him up.

“Come on, Daniels!” The taunt comes from Bo. “Finish him!”

I sweep Casper’s feet and send him hard to the concrete floor. I wrap myself around his back. My arms lock tight at his neck. My legs securing his in a scissor hold. He swings and flails.

“Tap out, man.” I speak directly in his ear.

“No thanks.” I tighten my grip. “Not interested. But your sister? Now that’s a piece of ass I’d like to hit. Twice.”

He bucks and jerks in my arms. “You’re dead.”

I laugh and listen to the crowd count down from ten. “Tap out and save yourself the embarrassment.”

Throwing a fist over his shoulder, he attempts to knock me off. No chance.

A flash of bright light.

I ball up, my arms protecting my ears. I can’t see.

Shouted commands fill the crowded room. The sound of a dozen sets of boots pound the pavement.

“Everyone on the ground! Now!”

JB Salsbury lives in Phoenix, Arizona with her husband and two kids. She spends the majority of her day as a domestic engineer. But while she works through her daily chores, a world of battling alphas, budding romance, and impossible obstacles claws away at her subconscious, begging to be released to the page.

Her love of good storytelling led her to earn a degree in Media Communications. With her journalistic background, writing has always been at the forefront, and her love of romance prompted her to sink her free time into novel writing.

Fighting for Flight is her first novel in the MMA romance series.

For more information on the series or just to say hello, visit JB on facebook or goodreads.