Book Blitz - Thou Art Mine by Renee Luke 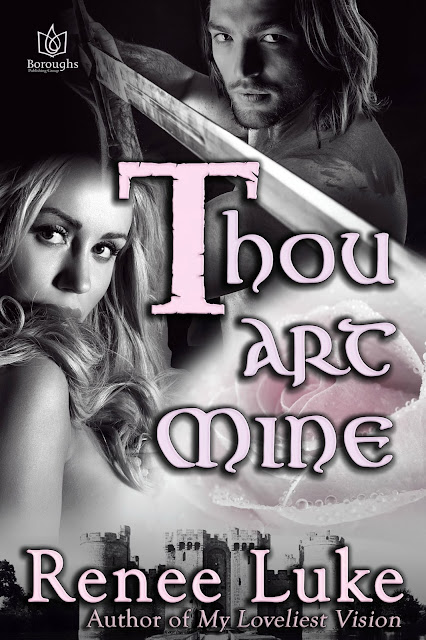 
A UNION MOST DESPERATE

Lord Boden Sinclair returned from war both victorious and ruined. His faithful service to King Henry II earned him a title, yet a deceitful blackguard stripped Ravenstone Castle bare in his absence. The only solution? To find the rogue responsible. That, and a lucrative marriage arranged by the Crown, a bond of necessity foretelling the end of all pleasure. And so the young beauty on the ground before him, this willing golden-haired temptress, shall be his final taste of joy.

Maltreated and ignored, long has Lady Izabella Bennet yearned to be caressed with love. Long has she waited to sample the pleasures of the marriage bed. Now, before her, stands her husband-to-be. Handsome and powerful, he seeks to conquer her body before her hand, and she is sorely tempted to yield. But marriage is more than pleasure. It is also truth and trust and honor. So surrender must needs be delayed—at least partially, tantalizingly, for as long as Izzy can manage. Each erotic step in this battle will be hard-fought—and harder loved. And though Boden claims she is his, he will soon see that she has already made him her own.

“Are you hurt, milady?” Boden asked the maid on the ground. “Shall I assist you to your feet?”

His voice was low, so as to not frighten the strange girl beside whom he stooped. With shaking fingers he swept away the long tendrils of her hair, marveling at their silken texture. The colors of sunshine swept his hand, and his tanned and calloused skin contrasted such fragile beauty.

The girl’s face was hidden, covered in a pair of dainty hands as dirty as a stable boy’s, but, near the curve of her ear, her pulse raced beneath the smooth, creamy skin of her neck. A strong breeze picked up, fluttering the girl’s kirtle up her leg, revealing a stretch of smooth white calf and then a glimpse of tempting thigh. Biting back a groan, Boden reached to shove down the dress, not realizing that the movement might frighten her further.

It did. She jerked away, kicking out one of those lithe long legs and hitting him square in the gut.

Her voice was broken, and what sounded like a sob escaped with her final word. One of her hands darted down to shove at the linen of her skirts, but the other remained to shield her face.

That gown marked her a lady, judging by the heavy embroidery around the hem. Wary of a lady traveling alone, especially with dusk descending, Boden narrowed his eyes and searched the bordering woods for men armed and ready to protect her—or outlaws using her as bait. He saw none, but he rested his hand on the hilt of his sword, instinctually prepared to defend himself.

“Nay!” She rolled away. Keeping her back to him, she sat upright and drew her knees toward her chest. “I’ll not give a randy rogue such as you the pleasure of my name.”

“Zounds, milady, ’tis not my intent to debase you. You speak as if I’ve caused you harm in some way, when in truth I found you here, prostrate upon the ground and weeping.” Boden rested his elbow on his bent knee and bowed his head. The day had been far too long to trouble with such an ornery wench, but something kept him kneeling beside her in the grass. Curiosity, mayhap? Concern for a well-born young woman out on her own? Or was it memories of days more pleasant from his youth, when women sought him out for just what this maiden seemed to fear?

“I’m not crying, and I’m not in need of your ‘valiant assistance,’ sirrah. You can be about your journey,” the young woman snapped, her tone capable of scaring away even the wildest boar in the forest.

Surprised and angered by her lack of civility, Boden grabbed her shoulder. “Look here, wench. I’d like naught else but to ride away and never look upon you again. Jesu, I’ve signed my life away this very day to another…” He trailed off, wondering at his sudden desire to confess his predicament to a strange girl. Clearing his throat, he said instead, “I’ve offered you help and you’ve done nothing but berate me. You wish to repay my kindness with poison-tipped barbs?”

She said nothing. So, rising slightly, he lifted her from the ground and spun her to face him.

“Unhand me!” she demanded, shaking thick golden hair from her face and yanking at her arm in an attempt to be free. A film of dust covered her cheeks, and streaks of mud. Boden just tightened his fingers and pulled her nearer.

Violet eyes stared back at him; then the girl blinked twice, shaking her head. The expressive hue of her eyes deepened. Was it from fear or surprise? Boden could barely guess. He could just imagine those eyes turning darker from passion as the right touch set fire to her skin…

Those lush lips trembled. Beneath that grime were they pink or red or the perfect color of the flowers growing upon the southern wall of his keep? Boden needed to know, and so he brushed the pad of his thumb across her mouth, smearing away the dirt. Aye, it was as he’d thought. Rose petals. Her lips were the same shade and velvety texture.

She gasped, her delectable lips parting further, and Boden’s fingers expanded their search of her face, causing a pink glow to peek out from behind her mask of mud and grime. He rubbed his knuckles over her cheekbone, tucking frolicking curls behind her ear and smoothing his palm over her skin.

Her forget-me-not gaze locked onto his, forcing forgiveness despite Boden not being in the mood to offer it. The girl’s lips trembled, and it appeared as if she were about to cry again. Then, surprisingly, she gifted Boden with a beguiling smile. It was as if the sun had come out from behind a cloud. 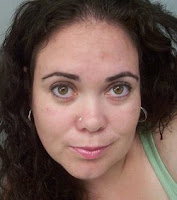 a Rafflecopter giveaway
Posted by Give Me Books at 7:08 am