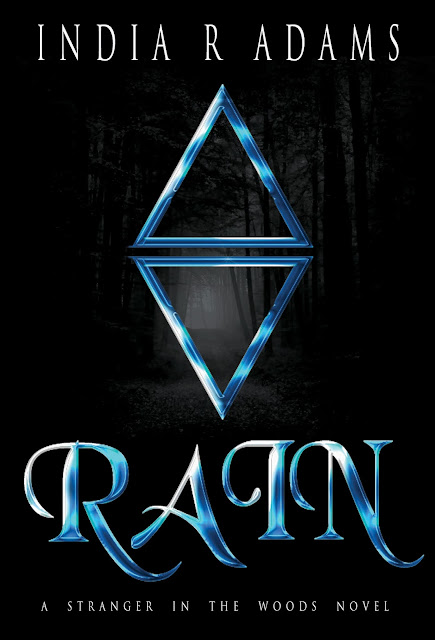 What if you knew you had just met the other part of your soul–the one who can take away all the pain and loneliness but no one believes you because the rugged stranger from the woods is nowhere to be found? Would you search for him? Would you be strong enough to continue to believe that he exist somewhere out in the darkness where you he found you? And if you were to finally find the stranger from the woods and learn he is like no other tale that has ever been told… would you still have the courage to love him?

Rose has no time for romance because her father has passed away from an illness plaguing the small town she grew up in, and now her mother has also contracted the illness leaving Rose’s two younger siblings to be her responsibility. But when her best friend Gunner forces her to be young for a night and celebrate her twentieth birthday with a bomb fire and friends, Rose meets a stranger who lives in the woods, and Rose soon learns he is no stranger at all. In fact, this warrior, magical being is trying to keep her… alive.

Two bloods of one will bring down the shadows, to cast, no more.. 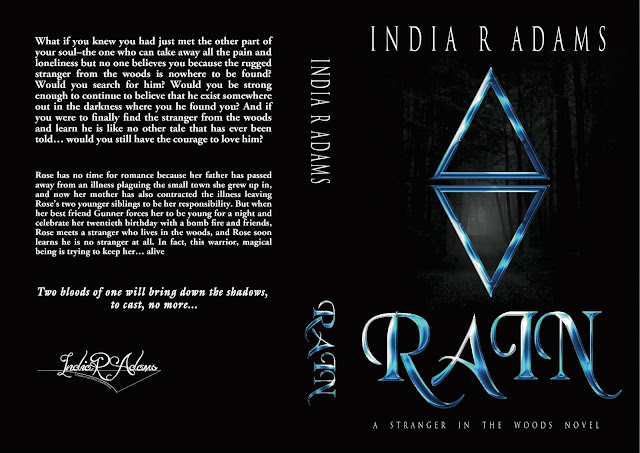 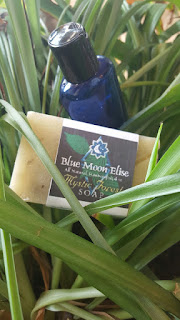 A product line has been created to mimic the one Rain's characters developed. Mystic Forest. All organic soaps and body oils, made with lavender and patchouli.

You can purchase it here: http://bluemoonelise.com

When the lighting bugs land on my window sill, I almost don’t look up, but one bug lands on my hand, altering my view. From the tree comes the stranger, running from the dark of the woods to the light of my home. He runs faster then I’ve ever seen a human run. His dark hair flies loose in the wind. His body moves like a well-oiled machine.
The energy that surrounds him is as electrifying as the wild spirit he exudes. My heart screams to be grabbed and jolted back to life as if recognizing he’s my personal source of energy. My body is at attention. He runs sensually yet with an animalistic nature.
Finding strength again, I rise to my feet as his legs and pumping arms push him across my empty dead fields, not slowing down, not even as he closes the distance between him and my house—between him and me. Without a pause or delay, in mid-stride, he bends his knees and easily leaps from the ground. I gasp at his impossible strength and take an involuntary step backward as he lands on my porch roof as if he has done this a million times. There is a stillness in the air, except for my breath sucking in and out of my exasperated lungs. I can’t be sure what percentage is alarm and which pure exhilaration.
The first time I see him up close since the night in the woods is with hunched shoulders as he slowly uncurls his rippling body from his crouched position. His hair sprawls over his muscular back and shoulders. From underneath, two blond braids, one on each side of his neck, hang over his chest—a chest that announces formidable strength to be reckoned with. His trousers appear to be made out of some foreign material. Pockets down his legs sport mismatched buttons. His feet are bare and his chest naked with a leather strap and a sheath across it. Another strap holding what seems to be a small, barbaric knife is attached to his masculine bicep, another on his thigh. His tan arms look as if they ache to hold something. I instantly hope they long for me.
As he stands there, at least a foot taller than me, I lose my breath all together. Those glowing blue eyes burn brightly as they gaze upon me with something I’ve never witnessed. The stranger from the woods opens his mouth, struggling hard as I am for air, but I suspect he isn’t out of breath. His extremely fit body tells me that. His eyes speak of a whole other kind of struggle. Desire. I can smell it—sense it—all over him.
“You have summoned me, Rose, but you are with another.” He stalks across the porch roof to my window as if he knows these steps well. I take a step back, not out of fear, but because my name on his tongue is an aphrodisiac, causing overwhelming emotions to erupt in my soul. The stranger from the woods must sense I’m not scared or doesn’t care because he doesn’t stop. He enters through my window, confidently barreling forward. Again, his deep voice resonates in my inner core. “Why, Rose?”
“I-I’m with no one.” I slowly back away until my bedroom wall won’t let me go any further. I realize I don’t want to move. His radiating heat only gets more stimulating the closer he gets to me, and within seconds, the stranger is so close his breath exhales across my face, smelling of honey and a luscious, natural sent I want all over me. His whole body smells as fresh as the woods I love.
His eyes never leave mine. “No one, Rose?”
My chest moves as though it may explode. My voice shakes. “You... I think I’m with you.”
His body leans to mine. “You are.”
Every second that passes is the most intense of my life. That means, within half a minute, I’ve experienced heaven. “You’re real.”
“I am.”
My eyes want to close so I can rejoice and bathe in his rich tones, but I’m afraid he might disappear. “I know you.”
His hand holds of the nape of my neck, fingers caressing my skin as his other hand cups my cheek. “You do.” 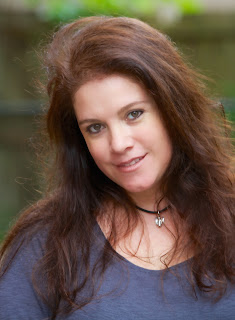 India R Adams is an author/singer/songwriter who has written YA and NA novels such as My Wolf and Me, Blue Waters (A Tainted Water Novella), Steal Me (A Haunted Roads Novel), Rain (A Stranger in the Woods Novel), and Serenity (A Forever Novel) as well as music for the Forever series.

India was born and raised in Florida but has also been lucky enough to live in Idaho (where she froze but fell in love with the smalltown life), Austin, Texas (where she started her first book, Serenity, and met wonderful artists), and now Murphy, North Carolina (where the mountains have stolen a piece of her heart).

Being a survivor of abuse has inspired India to let others know they have nothing to be ashamed of. She has used her many years of professional theater experience to build characters and stories with dark undercurrents that stem from her personal life. She says, “I’m simply finding ways to empower perfect imperfections.”

Another thing India feels needs to change is the problem of sexual slavery. She has joined forces with jewelers to design beautiful ways to raise money for nonprofit organizations. Even though India writes about serious subjects such as domestic violence, sexual abuse, and human trafficking, she has a magnificent sense of humor as do the characters she creates. Her novels are perfectly balanced between laughter and tears, letting readers see how to empower their own perfect imperfections. 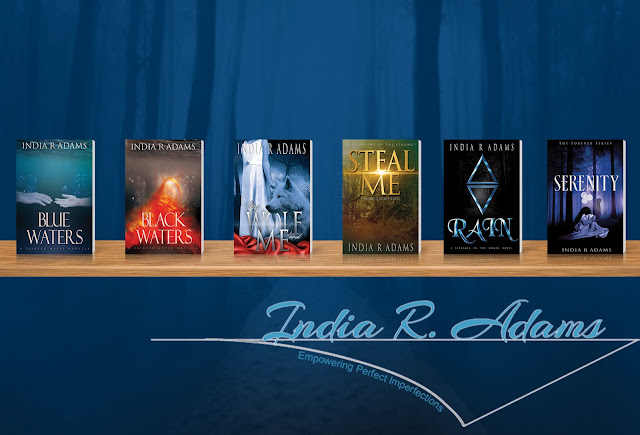 a Rafflecopter giveaway
Posted by Give Me Books at 8:35 am