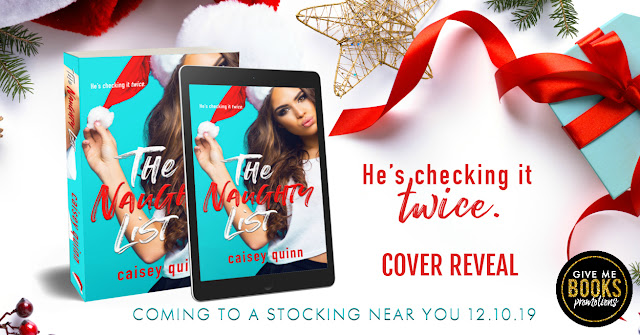 
HOLLIS ROSSI is tired of being good. What's it ever gotten her, anyway?
When her boss, the infamous and illusive Jonah X, passes her up for a promotion because she's "too wholesome" to handle being his personal assistant, she sets out on a mission to prove him wrong.
Her naughty list contains everything she plans to do to show him she's not the innocent, naive girl he thinks she is. She just didn't plan on him finding it.
As Jonah shows her the ropes of being bad, she can't help but wish he'd show her some other ropes--like the ones in his bedroom.

The Naughty List is a steamy contemporary holiday romance.

Only available at the following retailers
for a limited time


“Look.” I point at the recipe. “Flour, sugar, baking powder, baking soda, lemon zest, salt, almond milk, canola oil, vanilla, lemon juice, and fresh blueberries. The streusel on top has some vegan butter in it, but that’s everything. Promise.”
He leans close enough that I can smell the sharp clean scent of his body wash and expensive aftershave.
“Huh. Well they’re way better than the last ones.” He practically inhales another one.
My teeth sink into my lower lip and tug. “Um, yeah. I over-mixed those. And I didn’t know you were supposed to mix your wet and dry ingredients separately. My mom gave me some tips this time.”
His eyes drop to my mouth but I’m not sure why. Jonah doesn’t see me like that. He never looks at my mouth. Maybe the way to his heart really is through his stomach.
“Can I keep this?” He retrieves the recipe from the countertop. “I might have Erma make a big batch for some friends of mine.”
“Mmhm.” I’m temporarily stunned from the way he’s openly watching my mouth. Our faces are close enough to touch.
Erma is his housekeeper and she’s an amazing cook. I’d be jealous of her but she’s sixty and looks like Mrs. Doubtfire so I don’t think she’s Jonah’s type.
“Thanks. Don’t give the dogs any of my muffins,” he teases.
Zeus gave up long ago but Achilles is still staring longingly at the muffins.
He moves to exit the kitchen and my brain resumes full function once he’s out of my personal space.
“Jonah, wait.”
He turns, his hip bones doing that sexy V thing that make my mouth water.
“I actually need that recipe back.” My body shifts into panic mode as he regards me warily with the recipe in his hand. “I’ll type you up a better copy. I need to make a few adjustments anyway and I can’t remember what website I got that one from.”
My heart is racing and my words are coming out on top of one another.
Jonah’s expression says I’m acting as crazed as I feel.
He doesn’t make a move to give it back.
“Jonah, seriously. I need that one. Please.”
I have no poker face. I’m practically begging and that is not like me.
“You need it?” He cocks his head to the side, amusement dancing in his eyes.
For a few seconds, I worry he’s going to pull some big brother crap on me—hold it over my head and make me jump for it or something. I get enough of that from Mikey and Tony. I definitely don’t need it from Jonah.
Thankfully he just shakes his head and starts to hand it back.
Until his eyes catch the writing on the back.
“What’s this?” He glances at me then back at the list. “Your Christmas wish list on here, Rossi?”
“Give it back, Jonah. I’m serious.” I can’t breathe.
I reach for it and he steps backward. “Hang on a minute. I need to know what to get you for Christmas.”
His eyebrows shoot up as soon as he makes out the words. His lips move as he reads. I never noticed that before.
I give myself a mental slap. I’m losing sight of what’s important here.
“Adult toys, lingerie, and law breaking?” Jonah nods appreciatively. “Aren’t you a busy little elf this holiday season?”
“Shut up. My sister-in-law wrote that. She thought it would show you that I deserve the job.” I sigh heavily. “You’ve had your fun. Now give it back.”
He hasn’t made it to number six yet.
Please, sweet baby Jesus, don’t let him make it to number six.
“Hang on,” he says, reaching out and keeping me at arm’s length. “What else have we got here?”
“Jonah!” I make a grab for the list, swiping my hand wildly, hoping to at least tear it.
I miss, catching his towel instead.
In one split-second, my entire universe takes a hard left.
Jonah’s towel falls and he is naked, holding a piece of paper that suggests I sit on his face.

Caisey Quinn is the bestselling author of over 15 romance novels.

Her books have been both traditionally and independently published and have ranked in the Amazon Top 10 on half a dozen occasions. Her Neon Dreams series (HarperCollins - Avon/William Morrow) has been translated into multiple languages including French and Italian and distributed world-wide.

You can find her living out her very own happily ever after with her husband and two children in a small town in Alabama.