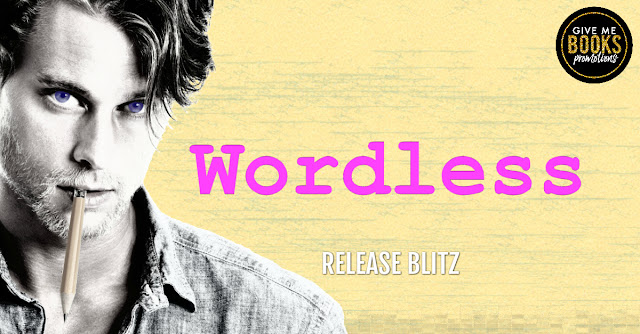 Sparks fly between a plucky intern and her billionaire boss in this new standalone from a USA TODAY bestseller.

For someone so famous, he sure has a lot of secrets. He's Jack Ward, my billionaire boss, at least for the summer while I support his national book tour. But the funny thing is, the tour doesn't make much sense. The odd cities, the late-night excursions, the secrets simmering between us – they're all making me a little crazy, especially when he gives me one of those looks. You know the kind.

He's up to something. I just know it. And I'd love to find out what. There's just one tiny problem. With his movie star looks and devious mind, he's distracting me to no end. And just maybe, I'm distracting him, too.

But the worst thing? I'm pretty sure I like it.

***Wordless is a fun, full-length standalone romance with a guaranteed happily-ever-after!***

For someone I'd known less than four hours, he sure was bossy.
"Pack your stuff," he said. "We're leaving."
I stared up at him. "We?"
His hair was thick and blond, and his eyes were so blue, they made the ocean look dingy in comparison. "Well you're not going alone," he said.
I struggled for a reply and came up empty. Honestly, what was I supposed to say? The guy in front of me wasn't just a new acquaintance. He was also Jack Ward – my favorite author, a total hottie, and a billionaire several times over.
Unfortunately, he was also just a little bit scary. Ask my roommate. He'll tell you – well, unless he's already escaped through his bedroom window, that is.
I glanced around the condo where I'd been living for the past two weeks. To say the arrangement had gone to crap would be giving crap a bad name.
Turns out, my roommate was a druggie and a dude. On top of that, he wasn't terrific at keeping his horse in the barn, if you know what I mean.
Until just five days ago, I'd never even met the guy, much less realized that "Nicky" wasn't short for Nicole, but rather Nicholas. But in my own defense, the gal who'd rented me the place had neglected to mention this little detail, along with a whole bunch of other stuff – on purpose, no doubt.
And me? Like a total sucker, I'd actually trusted her.
Now I didn't know who to trust. I bit my lip. If only my sister were here.
Jack's voice interrupted my thoughts. "If you need boxes, let me know. I'll have some delivered."
I blinked. It was nearly ten o'clock on a Sunday night. This was a small town. Nothing was open. I shook my head. And was box delivery seriously a thing?
Not in my world, it wasn't. Then again, I wasn't a billionaire. In fact, my bank balance was dangerously close to zero.
I just had to ask, "Who'd do that?"
"Do what?" Jack said.
"Deliver boxes. I mean, nothing's open."
He gave me a look. "Do you need them or not?"
"No," I admitted.
"Good," he said. "Then get packing."
I didn't appreciate his tone. "Don't you think that's kind of bossy? I mean, I never said for sure that I'm moving."
His jaw tightened. "Well you're not staying here. I can tell you that."
Yup, he was definitely bossy. I wanted to argue. But I couldn’t. And why?
It was because he was right.
I couldn't stay. Not anymore. But I'd known that already.
Stalling for time, I glanced around the condo. The place was surprisingly nice. It had come pre-furnished, too, which meant that nearly nothing was mine.
Sure, I had some clothes in the bedroom along with my notebook computer and a few essentials. But the sad truth was, I could probably cram everything I owned into my cheap compact car.
No boxes needed.
Still, I shoved a hand through my hair and tried to think. Leaving sounded easy enough, but where would I go?
A hotel?
As if I had the money.
My sister's place?
That would've been the plan, if only she were in town.
I was still running through my options when Jack said, "Becka."
I jumped at the sound of my name. "What?"
"You're not packing."
"I know, because I'm thinking."
"So do both," he said.
I sighed. On this, he was right, too. After all, it would take me at least a half-hour to gather up my stuff. Surely by then, I'd know where I was going.
But for now, I was simply going crazy.
Some of this was Jack's fault. Not only had he just assaulted my scuzz-bucket of a roommate, he was distracting the heck out of me.
Some people go for movie stars. Or rock stars. Or hell, even reality TV stars. But me? I'd had my nose crammed in one book or another for as long as I could recall. Some of those books were better than others.
But seven years ago at the ripe old age of seventeen, I'd fallen head-over-heels in love – with his books, sprawling medieval tales that were beyond brutal, and yet sometimes so beautiful they almost made me cry.
It was totally insane. Jack was only a few years older than I was. In fact, he'd just turned thirty-one last month. And how did I know this?
I'd read it on the internet, of course.
Now, he was glowering down at me like I was a bratty kid refusing to clean my room.
I wasn't bratty. I was just confused.
Hell, I'd been confused ever since showing up on my sister's doorstep four hours ago, only to encounter someone who definitely didn't belong.
And that was putting it mildly.

USA TODAY Bestselling Author Sabrina Stark writes fun contemporary romances featuring plucky girls and the bad boys who capture their hearts. She's worked as a fortune-teller, barista, science writer and alas, jobs that required a hairnet. She has a journalism degree from Central Michigan University and is married with one son and a bunch of very spoiled kittens. She currently makes her home in Northern Alabama.