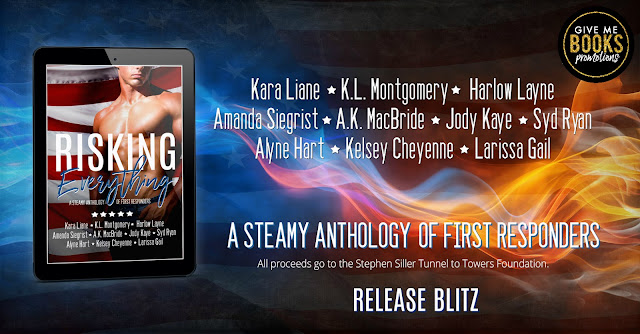 Discover ten spicy stories about brave first responder men and women from some of your favorite romance authors. All proceeds go to the Stephen Siller Tunnel to Towers Foundation.

Romance on the Rig by Kara Liane: Finding love on and off the ambulance proves difficult for Air Force veteran Murf—until he meets Lana, a game-changer. Murf may be an EMT hero, but he’s only human. Mistakes happen in love, and a misunderstanding keeps them apart. It’s time to make things right and answer the call from the heart.

Reconstructed Heart by K.L. Montgomery: Trey Prince never expected to make a gruesome discovery at an accident scene only a few months into his new job with the Collision Reconstruction Unit, and he never expected Trooper Jenna Labato to be the one who helped him pick up the pieces. No matter how badly Jenna wants to help him heal, Trey isn’t sure his heart or faith can ever be restored—not without something close to a miracle.

Walk the Line by Harlow Layne: Gage Walker never thought a call to a scene would change his life forever until he met Claire Blake. Sparks fly, but when his fellow Brothers in Blue’s girlfriends are targeted, Gage wants nothing more than to protect her—even if that means he has to give her up.

Always Kind of Love by Amanda Siegrist: The last thing Ethan McCord wants to deal with is his old high school flame, even though his desire for her hasn’t diminished. Battling the burning blazes and an arsonist bent on destruction is nothing compared to fighting the temptation to rekindle the love he always wanted.

Beautiful Persuasion by A.K. MacBride: Raelyn wasn't supposed to fall for the rebound guy, but the moment Griffin opened his mouth, he drew her in with his sexy Irish accent and dark gaze. As one night of sizzling passion develops into something more, she's forced to choose between the man who sets her heart ablaze and the only family she has left.

Going Down by Jody Kaye: Devastated by her parents’ divorce, Kat’s looking to regain the stability she took for granted. Dash Newhouse is a drifter, paying his bills by skiing at a new mountain each season. Paired together on ski patrol, Dash reminds Kat that she can’t live life to the fullest while playing it safe. But when the snow melts, will he ride off with her heart?

Rescuing Ryan by Syd Ryan: Ryan is out of the frying pan and into the fire, working the oldest profession of all time to finish her last year of nursing school. On the first day, she meets Chris, the sexy firefighter, as he is licking his wounds of rejection. For Chris, rescuing Ryan will be the hardest rescue of his life.

Perfect For Me by Alyne Hart: Firefighter Luke O'Conner and ex-model Grace Adams shared all their firsts in a tiny cabin just outside Sugar Creek. Nine years later, Grace is back in town, and they find themselves waiting out a storm in that very same cabin. Fire burns between them as neither seems able to keep their lips or their hands to themselves.

Call of Fate by Kelsey Cheyenne: After surviving a school shooting, Aubrey Winters became a dispatcher, dedicating her life to helping people. One fateful call and a meet-cute at a coffee shop leads Aubrey into the arms of English teacher Noah Burgess. Can their trauma be overcome when true love calls?

Loving Lindsey by Larissa Gail: Firefighter Gavin Thomas has no desire to settle down anytime soon. He’s having too much fun playing the field. That is until he meets Officer Lindsey Allen, who’s moved to Oaktown to start over after a devastating loss. Can the blue-eyed beauty convince him to change his ways?

a Rafflecopter giveaway
Posted by Jo Webb at 10:45 pm

Email ThisBlogThis!Share to TwitterShare to FacebookShare to Pinterest
Labels: Giveaway, Release Blitz, Risking Everything: A Steamy Anthology of First Responders