Blog Tour - Mine by Katy Evans 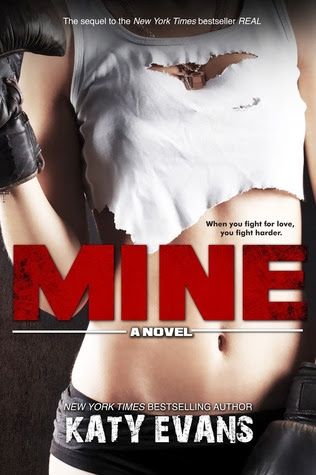 “I will do anything to make her MINE.” —Remington Tate

In the international bestseller REAL, the unstoppable bad boy of the Underground fighting circuit finally met his match. Hired to keep him in prime condition, Brooke Dumas unleashed a primal desire in Remington “Remy” Tate as vital as the air he breathes . . . and now he can’t live without her.

Brooke never imagined she would end up with the man who is every woman’s dream, but not all dreams end happily ever after, and just when they need each other the most, Brooke is torn away from the ringside. Now with distance and darkness between them, the only thing left is to fight for the love of the man she calls MINE.
GOODREADS LINK

MINE picks off where it last left off in Real . Brooke Dumas is finally back in the arms of Remington "The Riptide" Tate and starts his first fight of the season. Remy has been training with a vengeance, preparing to face his re-match against Scorpion after throwing the championship last season. While Remy tries to fights his way to the championship, Brooke's insecurities and jealousy plays a major factor in their hot steamy relationship.

Remy is still the strong Alpha male fighter we saw in Real but in Mine, readers get to see a more vulnerable, stronger, deeper side to him. In Real, Remy was a man of few words and communicated and expressed his feelings through the songs on his Ipod but in this book he begins to communicate and show his love for Brooke. He still lets his tunes express his thoughts and emotions. When this man opens up his heart, he fully lets you in. His love for his friends and Brooke is so deep and strong that he will fight and protect what he cherishes most at whatever cost. This is a man who has been hurt and abandoned by his parents and yet he keeps fighting and surviving. As strong as Remy is, the only person who can shake his world to the core, is no other than Brooke.

Brooke undeniably loves Remy so much. He belongs to her. She belongs to him. But somewhere along the way, Brooke's insecurities and jealousy creeps in. She was constantly in need of reaffirmation from him to profess his love for her. Although it was getting to the point of annoying, I do admire the fact that she truly saw the real Remy . She saw a man who was physically strong and beautiful on the outside as well as inside. She loves the "blue" or "black" Remy. She loves the man who is her lion, her protector, the man who stole her heart. Brooke really lives and breathes for Remy, her entire identity is swallowed up by what she can be for him. The relationship of Remy and Brooke is still as hot and steamy as ever. These two have so much passion and sexual chemistry that most of their deepest and heartfelt connections were often in bed.

Did I like MINE? Yes, but I did not love it. I would have given this book a 4.5~5 star rating but Brooke's insecurities and jealousy throughout the book was the downfall. Her constant need for Remy to reassure her that she's the only one in his life was getting annoying. How many times does Remy need to tell that she's his? She belongs to him and vice versa. Remy, on the other hand was amazing. He was able to balance his work life and his relationship with Brooke. I adored the way he worshiped, loved, and reassured her. Lastly, I Ioved Brooke's love letter at the end of the book. It was a PERFECT way to end the book. Overall, fans of Remington "THE RIPTIDE" Tate and Brooke Dumas will be happy with continuation of their love story.

a Rafflecopter giveaway
Posted by Give Me Books at 10:18 pm