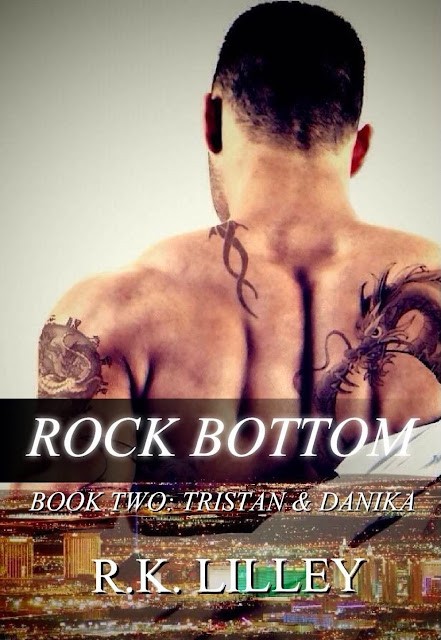 Their love had the power of a runaway freight train, and the potential to be just as destructive.
The tempestuous sequel to Bad Things picks up where the first book left off. Reeling from a profound loss, Tristan and Danika struggle to pick up the pieces and build a life together, but the hard habits of a lifetime are not so easy to escape.
Rock Bottom takes us on a dual point of view journey through addiction and desire, through love and agony, and answers the question we’ve been asking since these characters were introduced in Grounded: “What happened between Tristan and Danika?”

DANIKA
Even love couldn’t cushion a fall like ours. My love for Tristan was so big that I felt consumed by it, and even so, it was not enough to overpower our combined demons.
I struggled. I yelled and screamed. I scratched and kicked.
I fought like hell, but even the most determined fighters have to stop before they break.
No one could say I didn’t fight for him.
“I love you,” I spoke softly into his ear.
He gripped me harder. “I can’t ever lose you, Danika. I’m not sure I’d survive it.”
“You’ve got me. And I’m not going anywhere. Not ever.”
I meant the words when I said them, but life had other plans for us.
I’d have given my life for that fight. In fact, I very nearly did.

TRISTAN
She was the one.
If I’d ever had a doubt, I didn’t now. She was the one I’d be thinking about, longing for, until I took my last breath. If I lost her tomorrow, I’d pine for her like a lovesick fool.
This was the kind of love that only hit you once in your life.

This book is intended for readers 18 and up.

I had to put on a neutral face when I saw Him. Things were even worse that I’d imagined, and I’d imagined a lot.

He was shirtless and barefoot in the kitchen, jeans slung low on his hips, holding an empty bottle of vodka and bellowing something about finding out who’d drunk it all and not replaced it. He looked like he’s lost thirty pounds since I’d seen him last. The bones in his face had become alarmingly prominent. He’d had the healthy look of someone that bulked up at the gym before, but it was when he was thin like this that you saw that he was a big man, no matter what. It wasn’t just his height, though he was very tall, but his very bones where what made up the large frame that sent him apart.

His eyes were scary, and they widened as he recognized me. He slammed the empty vodka bottle on the counter, the clanking sound it made loud enough to make me jump.

I wanted to cry, he looked so bad. Could he come back from this? Could either of us? I told myself firmly that it wasn’t a question anymore. We had to.

OTHER WORKS BY R.K. LILLEY

a Rafflecopter giveaway
Posted by Give Me Books at 10:14 pm