Blog Tour - Devoted to Him by Sofia Tate 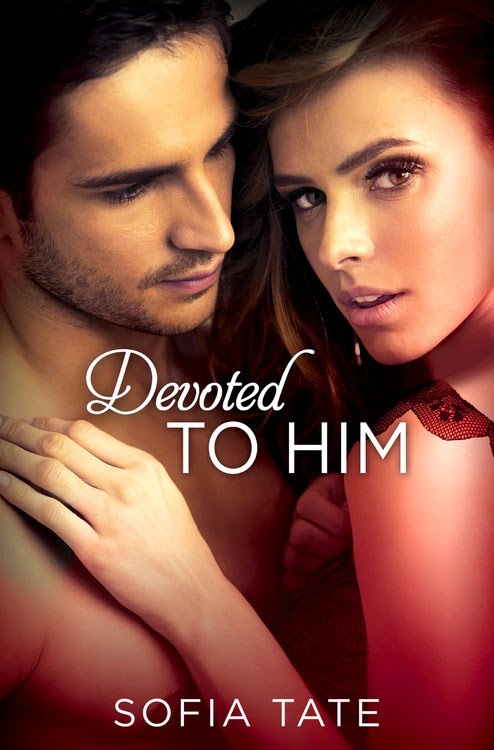 Two months ago, Allegra Orsini nearly lost the man of her dreams. Thankfully Davison Cabot Berkeley, a powerful billionaire who always gets what he wants, had refused to allow anything-or anyone-to come between them. Now back in the arms of the man she loves, Allegra receives an incredible proposal.
Allegra is invited to study under the opera world's most legendary diva. It's a once-in-a-lifetime opportunity . . . but it means moving to Italy for a month. Thirty days without Davison's touch. Allegra isn't sure she can survive it-especially when Davison begins pulling away for reasons she can't figure out. Is the man who has given her more passion and pleasure than she has ever known about to break her heart? Soon Allegra starts to realize that Davison could be guarding a secret even more devastating . . .

I picked up Breathless for Him - the first part of Allegra and Davison's story - on a bit of a whim and ended up being quite charmed by them. As such, I was very pleased to see them again in Devoted to Him, and I was once again taken by this wonderful couple.

After her traumatic ordeal, Allegra Orsini escapes into her love for billionaire Davison Cabot Berkley and for opera.

When a once-in-a-lifetime opportunity presents itself, Allegra finds herself jetting off to Italy for a month. But that means a month without Davison, which is hard to bear for both of them.

Their love is as strong as ever, but will the distance, and Davison's secrets, eventually come between them?

Oh, Davison!! You are a swoonworthy individual, aren't you?? As in the previous book, both Davison and Allegra are sweet and sizzling - with an emphasis on the sizzling this go around. There was considerably more *ahem* naughty time, and that worked for me and for the story. It not only helped illustrate the love this couple shared, it was also just plain hot, which is ALWAYS good.

Early on, I feared that there would be too little tension to maintain an interesting and well-paced story. Allegra and Davison were almost too perfect, but Sofia Tate managed to make keep it light (really, I don't need screaming, childish hissy fits or poor communication to stay interested) while adding a little intrigue (would they survive their time apart and would Davison admit what was really happening?)

I admire Ms. Tate for writing a sexy, steamy story, for making her characters mature enough to admit their mistakes or clarify their misassumptions, and for making this second installment even better than the first. I can't wait for more from this author - and if it's Allegra and Davison again...well, I'll be a happy camper.

Devoted to Him is the follow-up to Breathless for Him. No cliffhanger.

I take a few steps into the cabin, staring in awe. While the exterior of the plane may have been simple, the interior is the complete opposite. The leather seats and carpeting are in a soothing shade of cream, while the fixtures like the light switches and door handles are covered in gold. Couch pillows and a cashmere blanket in taupe cover a long sofa on one side of the cabin. Yet I don’t feel intimidated by the opulence of the space. It’s elegant yet comfortable. The entire plane signifies that someone of means and power owns it, but when you look inside, it’s calming and reassuring, just like Davison.
I sit in one of the single chairs by the window when I hear my phone ring. I almost forgot to turn it off.
When I check the caller ID, I smile.
“Hi, Harvard.”
“Hey, baby,” his deep voice greets me with that rumble I love. “You on the plane?”
“Yes, and it’s gorgeous. Thank you for doing this for me.”
“Always, Venus. Did Gerard give you the tour?”
“Um, no. I think he’s busy at the moment.”
“That’s all right. Even though I’m not there, I can do this for you over the phone. Did you know there’s a bedroom in the back?”
I never sleep well on planes, so the thought of having a decent rest before I get to Milan excites me to no end. “Really?”
“Of course. Why don’t you go check it out? It’s the door on the right.”
“Umm, okay. I guess I have time.”
I look up to the front of the plane to scan for Gerard, but he’s probably disappeared into the galley. I unbuckle my seat belt, walking slowly to the back. I turn the handle on the door to the right just like Davison instructed.
The door swings open, and I scream at the sight in front of me.
“Ready to fly my friendly skies, baby?” Davison asks me, a wicked smirk on his face, his eyes alive and shining and locked on mine.
I fly into his arms, coiling my legs around his waist. Grabbing his hair in my hands, I lock my mouth over his, kissing him furiously even though it’s been less than twelve hours since I last saw him.
When I can’t breathe anymore, I pull back to look at his beautiful face. “What are you doing here?”
He can’t stop smiling. “I thought I’d go with you as far as the airport in Milan, then fly up to London for some client meetings before going back to New York.”
I stroke his face with my right hand. “What a clever man you are, Davison Berkeley.”
“What can I say? I’m the king of multitasking.”
“That’s not the only thing you’re the king of.” I grin back at him.
“Damn right, Miss Orsini.”
I unwrap my legs as he puts me back down on the floor, where I can finally take a look at him and my surroundings. He looks so hot, his dark hair all rumpled thanks to my eager hands, dressed in a white button-down shirt, the pushed-up sleeves revealing his corded forearms, worn blue jeans, and the brown driving shoes I love on him. In the bedroom, the same color palette of cream and gold decorates the walls and fixtures, save for one thing—the double bed in the middle of the room that’s covered in a black cashmere duvet.
“Wow. That looks…comfortable,” I comment, envisioning the events to come later in the flight with great anticipation.
“Oh, it is, my love. Very comfortable,” he assures me slyly, planting a kiss on my hand before taking it in his, leading me out the door. “Come on. It’s almost time to take off.”
“So, wait. I’m guessing that I was the last to know that you were planning this, judging by the mischievous looks that Charles and Gerard were giving me.”
Davison sits me down in the seat next to his. “Pretty much,” he confirms as he’s locking his seat belt.
I give him a long stare. “Evil. Pure evil.”
He takes my hand again, stroking it with his thumb in that way of his that always arouses me. “But you love it, baby.”