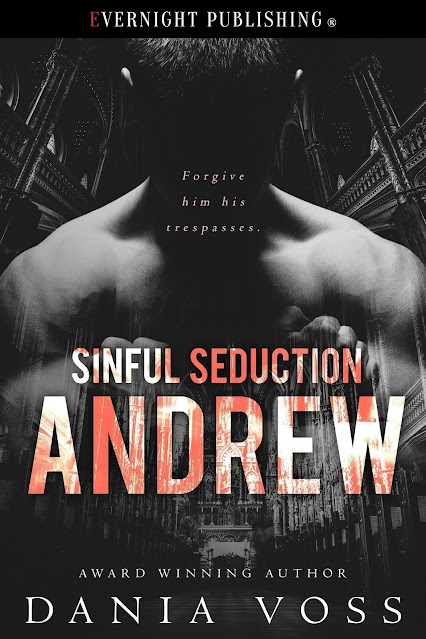 Forgive him his trespasses.
Charmeine Baker has sidestepped Andrew Knight for years. He’s persistent, irresistibly handsome, and makes her pulse race with excitement. She resists him because although he’s “a catch”, Andrew also represents the kind of wealth, power, and privilege she despises.
Successful nightclub owner Andrew Knight has known Charmeine since the day she was born. Now the pastor’s daughter is all grown up and he is certain she’s meant to be his. Only Charmeine keeps giving him the brush off despite their undeniable chemistry.
Andrew knows Charmeine has doubts about him, but he’ll do anything to have her, including pressuring her to marry him in exchange for saving her parent’s church from being bulldozed. Blackmail might be a sin, but Andrew will have to atone for his transgressions later.
Ever the dutiful daughter, Charmeine sacrifices herself and reluctantly agrees to marry Andrew. Can she survive at the mercy of the man who captured her heart against her will? 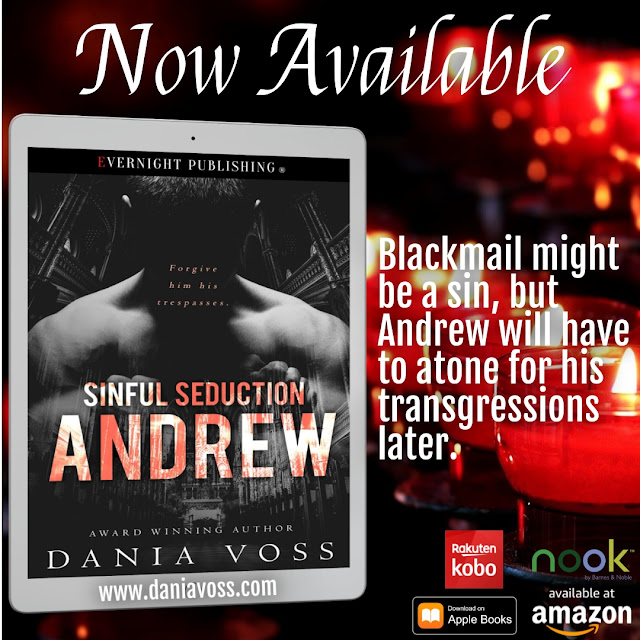 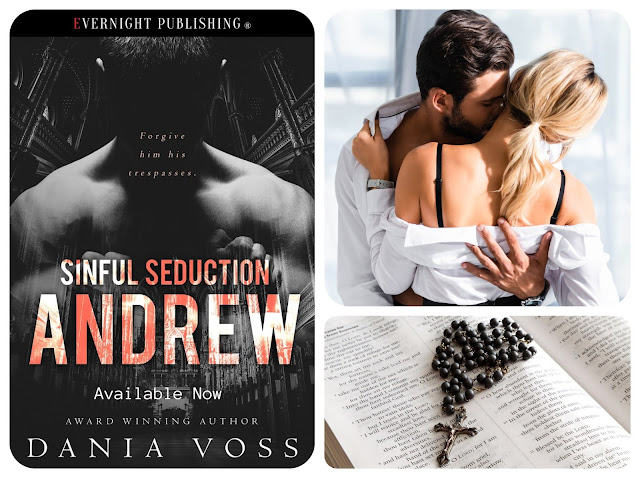 EXCERPT
Charmeine stiffened beneath him. Andrew held her tighter, not wanting the moment to end, although he believed it already had. He was hesitant to believe she wouldn’t want to spend more time with him. That all she wanted from him was a quick birthday romp. Or maybe it was just his ego in denial.
When she shoved at him, his worst fears were realized. His stomach knotted seeing the pained expression on her beautiful face.
Andrew regretfully moved aside, allowing her to get up. She quickly fastened her bra and desperately glanced around the room. “Where are my underwear? I need to leave. This should never have happened. It was a mistake. I don’t know what I was thinking.” Charmeine’s eyes glistened with unshed tears.
Leaning back against the couch cushion, he watched in despair as Charmeine, sans her panties, dressed, preparing to leave immediately after having sex with him.
“Of course it should have. It should have happened years ago, Harmony. It was not a mistake. Not even close.” He’d made his feelings for her clear since she’d turned eighteen. Charmeine had denied him at every turn, both frustrating and disappointing him.
Charmeine turned away from him, facing the front of his desk, glancing up at the cross hanging on the wall. It was decorated with multicolored gemstones, imbedded with a miniature Holy Bible, and small vials of holy water and earth from the Holy Land. Andrew and Simon hung one in each of their club offices.
She sniffled and shook her head. “No, Andrew. We’re too different. Regardless of how I might feel about you, I can’t abide by your love of power, privilege, and money. It’s the root of all kinds of evil. I should have left well enough alone.”
Andrew bolted off the couch. He discarded the condom and turned Charmeine to face him. His heart shattered at the sight of her tear stained face, but she was wrong about him.
“I don’t love power and money, Harmony. I don’t serve two masters. Working hard, becoming successful isn’t a sin. Even Proverbs says, commit to the Lord whatever you do, and your plans will succeed. The clubs provide good paying jobs and a safe, comfortable place for people to enjoy themselves.” Andrew believed he was blessed in all of his work, as were all of the faithful. He was stunned and hurt that she thought so little of him. Had she always felt this way about him?
Charmeine pulled away, fresh tears streaming down her cheeks. “Maybe you’re right, but I just can’t, Andrew. If I hurt you, I’m sorry. That wasn’t my intention.” She unlocked his office door and left without another word, leaving him alone and brokenhearted. 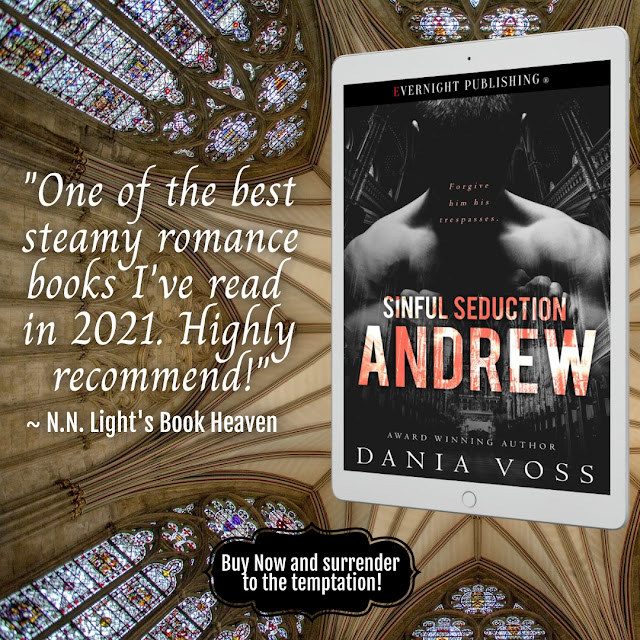 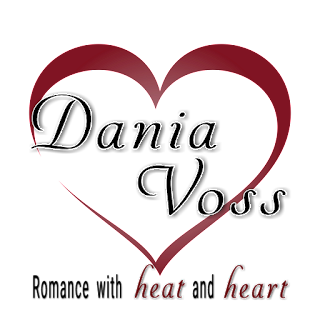 Int'l bestseller and award winning author Dania Voss writes compelling, sexy romance with personality, heat, and heart. Born in Rome, Italy and raised in Chicagoland, she uses her background to create stories with authentic, engaging characters. A favorite with romance readers, her debut novel “On The Ropes,” the first in her Windy City Nights series, became a Barnes & Noble and Int’l Amazon bestseller. “On the Ropes” will be featured in the Reveal Book Box subscription service in the romance category.
The second and third installments in the Windy City Nights series, “The Warriors' Whisper” and "Hannah's Bliss" received 5-star reviews from Readers’ Favorite ®. "Hannah's Bliss" was voted April 2019’s Book Of The Month at The TBR Pile. All three novels in the series were designated as Recommended Reads in the 2019 Author Shout Reader Ready Awards. “Hannah’s Bliss” earned an award in the Oklahoma Romance Writers of America’s 2020 International Digital Awards contest, and won 1st place in the 2021 National Excellence in Romance Fiction Awards (NERFA), in the Erotic Romance category. Dania has also contributed stories to multiple romance anthology collections.
Dania’s work has been highlighted on NBC, ABC, CBS, and FOX, and she has been featured in the Chicago Tribune, Southern Writers Magazine, and Chicago Entrepreneurs Magazine (selected as the #8 Top Chicago Author in 2021). The Windy City Nights series is going to the moon in 2022, as part of the Writers on the Moon project.
Dania’s novels are available at Amazon, Barnes & Noble, Kobo, Smashwords, and iTunes. When she’s not writing, you can find Dania at a sporting event, a rock concert, or at the movies (usually a comedy).
AUTHOR LINKS
WEBSITE
FACEBOOK
TWITTER
INSTAGRAM
PINTEREST
AMAZON
NEWSLETTER 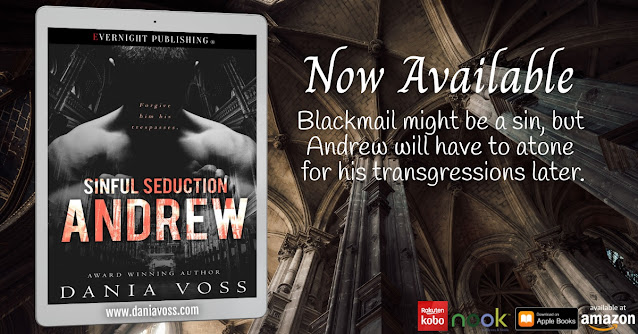