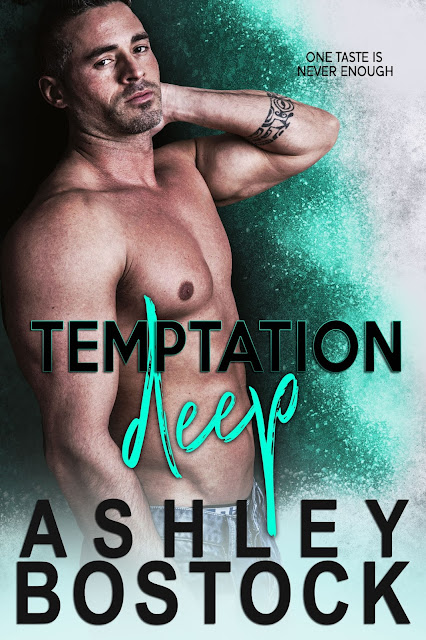 Title: Temptation Deep
Author: Ashley Bostock
Genre: Erotic Age Gap Romance
Cover Design: Bookin' It Designs
Photo: Sara Eirew
Model: Sebastieno
Release Date: November 30, 2021
BLURB
Having my best friend's daughter walk in while another woman was on her knees pleasuring me isn’t something I planned. Quinn watches me finish. Without shame, I hold her gaze and never look away.
Now, all I can think about is Quinn and how easy it would be to give in to temptation. She wants me more than anyone has ever wanted me. She's gorgeous, intelligent, and young. She also has a zest for life that I've somehow let pass me by.
As her boss, I see her every day. My resistance is slipping.
I’m a good man.
But even good men have their faults.
Quinn will be mine. 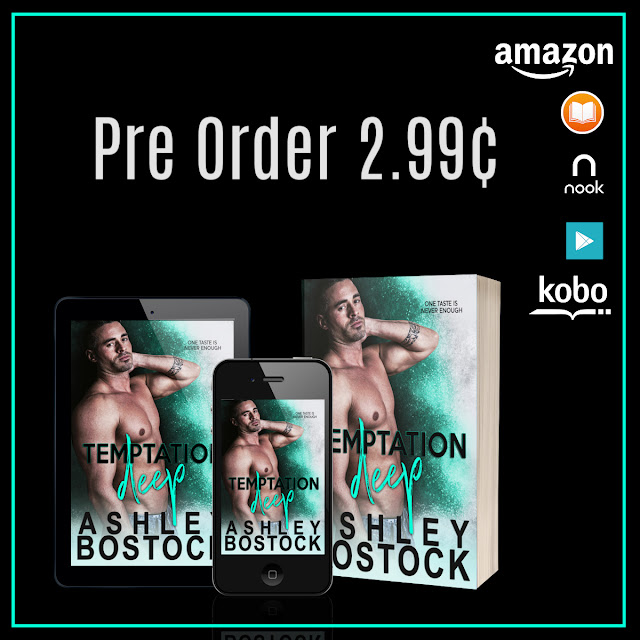 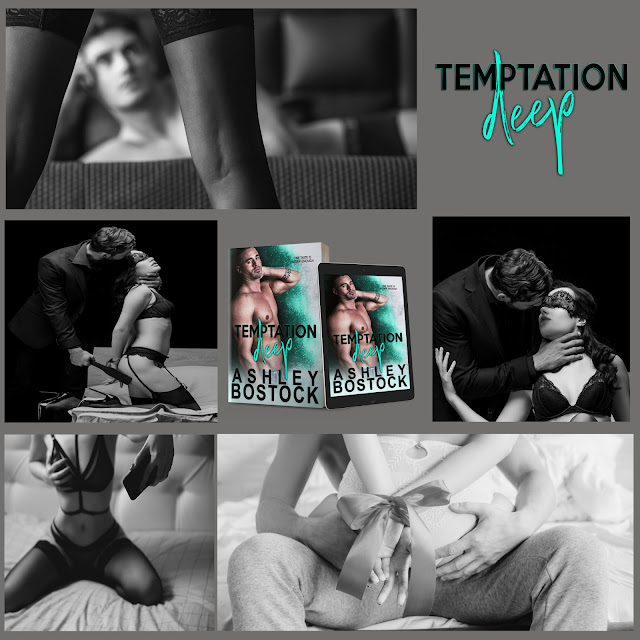 EXCERPT
The light from the pool table shone through the other side of the doorway. Even though it was partway shut, ample light filled the bathroom.
I held in my gasp.
My hand instinctively covered my mouth. My stomach bottomed out like I’d gone over the hill of a roller coaster. Jason—hot Jason with his shirt sleeves rolled up exposing his forearms, Jason. The same guy who I imagined eye-fucked me less than twenty minutes ago in my living room, Jason. He leaned against my bathroom counter, all sexy swagger. His one hand gripped the ledge of the marble, his strong thighs were spread out a little bit and his jeans were still mostly on—only exposing his massive cock and the skin along his hips and part of his ass.
Holy, holy, holy. For the love of all that’s holy, was I seeing things right? Am I drunk? Sleeping? Did I fall down the stairs and hit my head and I was really lying in a hospital bed hallucinating?
I blinked, hoping it would make things clearer.
Blinked again.
The devastatingly beautiful scene in front of me was still there.
What am I looking at?
Why couldn’t I tear my gaze away?
I sucked in a breath, taking stock of how I was feeling. The truth was…it was alluring. Impossible to look away. It was better than any filthy porn I’d ever watched. So painstakingly provocative that my clit was quivering with need.
He was fucking Kimber’s mouth.
She took him in her mouth so expertly, in and out. Her red lips fit around him magnificently—like they were meant for him. She pulled back on a pop and a string of saliva caught between the head of his cock and her cherry lips.
Fuck me.
It was raw beauty.
For a split second, it was me kneeling there and I grew wetter. He was beautiful down there. Solid and large. Perfection. Even with his cock covered in saliva from another woman’s mouth, Jason Richter was irresistible. Should I be ashamed that I was watching my father’s best friend get head? No fucking way. Jason’s hand was on Kimber’s head. He watched her lick him like a lollipop. When she took him all the way in her mouth, he let out a groan. Her lips touched his pelvis. Deep.
“Fuck yes,” he groaned in this husky ass voice I’d never heard before. Tingles floated from my nipples to my toes. He was beautiful everywhere. The way he stood. His sinful voice. Even the way he moved was beautiful.
I appreciated how he wasn’t coming in her mouth right away. Giving my ex-boyfriend a blow job usually lasted for two minutes, if that. But not Jason. Kimber had folded up a towel and was using it to cushion her knees—like she already knew she was going to be down there for a while.
Some women had all the luck.
I had no idea these two were a couple. Explains the flirting. I had no idea watching something like this in person would affect me so deeply. My toe nudged my tank top on the carpet. When did I drop that? I was a deer in the headlights, standing there in my bra and shorts, unable to look away.
Jason was in his element. His hips thrust in time to Kimber’s mouth as she took him in and out. I was in awe at how they worked together in perfect harmony—he’d thrust in and then she’d pull back. In and out. His mouth was part way open in bliss. I couldn’t stop myself from putting pressure on my clit with my free hand. I was dying. I was totally fucking my dildo tonight when this episode was over. Maybe even getting out my wand.
Jason bit down on his bottom lip and wrapped her hair around his fist. His thrusts started increasing in speed. My nipples zinged with electricity. Definitely getting out my wand. Most definitely. Was he going to come inside her mouth? Pull out? I didn’t even care. I wanted to see his beautiful face when he came. The nerves in my clit pulsed wildly—much more wildly than I’ve ever experienced in my life.
Jason grunted again, low and long, like a lion purring from his throat, making my own chest vibrate. “I’m going to come,” he said, in an equally low and seductive as fuck voice.
My phone lit up with a text message, illuminating me in the darkness of my room. Fuck. I didn’t look at it. I couldn’t miss Jason getting off. But there was no question that I was busted. I didn’t make an attempt to move. This was the dirtiest moment in my life. Jason’s gaze penetrated my soul and I imagined he was telling me all sorts of filthy things with those beautiful eyes. His lips went into a smirk before he muttered fuck in the sexiest voice I’d ever heard.
His deft hips flexed forward while he held Kimber’s head still and he filled her mouth with his glorious come.
All the while, never taking his eyes off mine. 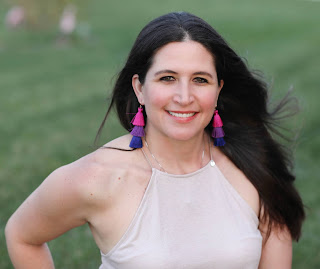 Ashley Bostock was born and raised in Colorado, but her husband moved mountains to get her to Nebraska where they currently reside with their two children and her animals. She stays busy daydreaming about the hot men she writes about in her novels.
She has traveled all over the world, but still has an extensive list of places she would love to visit. Anywhere near a sky-blue ocean will always be at the top of that list, although going back to South Africa’s Kruger National Park to view the wildlife is a close second.
She carries a bachelor’s degree in History with a concentration in Elementary Education from Metropolitan State College of Denver. While she loves children, she now fears teaching, which probably has something to do with being a stay-at-home mom.
You can usually find Ashley on Instagram. 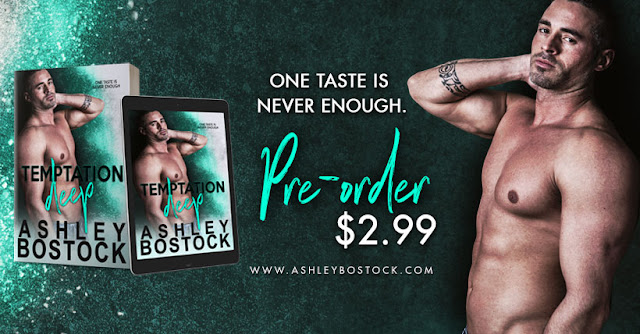