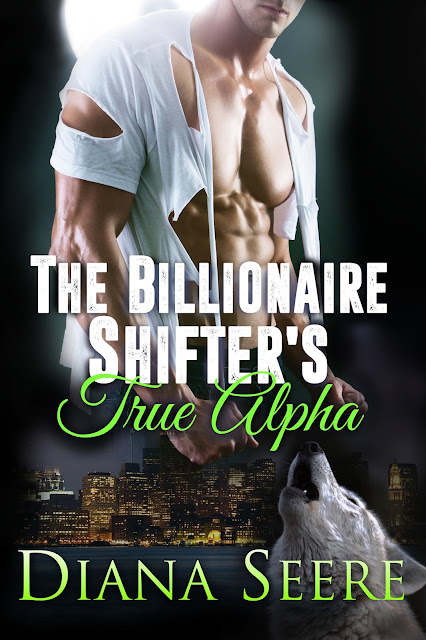 Sophia Stanton is a confident billionaire bear shifter who enjoys the finer things in life -- especially fine men. Unlike her twin brother, Derry, she has no plans to settle down with just one mate. Why limit yourself to a single taste when you can have a little lick of everything?

She's rich. Powerful. Well-educated. A statuesque, sexually liberated woman who towers over most men and who turns into one of the most fearsome beasts in North America.

What man -- or shifter -- could give her what she truly needs?

Zach Hayden was an ordinary guy until an accident in Sophia’s brother’s research lab left him howling at the moon. Turned into a werewolf by the same serum he helped to create, biochemist Zach is now seven inches taller, has seventy pounds of new muscle, and, well -- everything got bigger.

Unconvinced he’s adjusted to his transformation, the Stantons confine Zach at their family compound in Montana, where Sophia offers to teach him how to manage his new powers—and libido. But when they both hear The Beat, an old shifter legend that guarantees they are made for each other, is falling in love their fate -- or is it just wishful thinking?

When her powerful family questions his motives and powers, can Zach rise to the occasion— 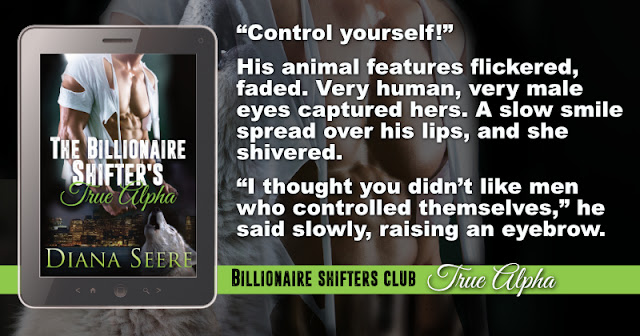 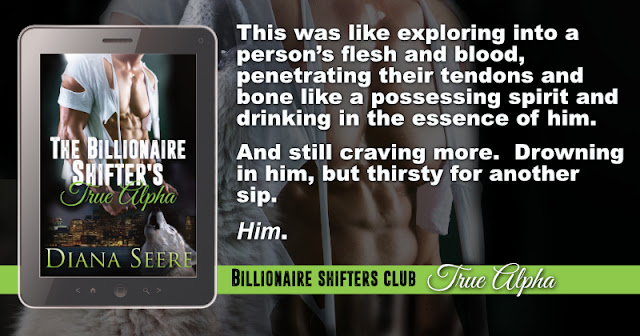 The world was a heartbeat.
And Zach was its heart.
As he watched the elevators close, he felt like four chambers of red, pounding flesh, beating in sync to pump himself into the world, taking it over, king of it all. Sophia’s fear bubbled off her like hot water on a griddle, bouncing and tingling until it evaporated into nothing but the memory of the ripple. She was pure beauty in pulsing form, every single cell of her deliciously large frame filled with nothing but attention to him.
Just as nature intended.
Power coursed through him like a drug, making his head light with an irrepressible urge to smile, to laugh, to take in the wonder of his connection to, well, everything.
Everything but her.
Time to fix that. Now.
Drawn to Sophia, he reached for her shoulders, finding resistance that only spurred him on, his body moving as if choreographed, her hot, sweet mouth against his before he knew it. She was tall, impossibly so, but even more outrageous was the fact that he was taller. Last year she’d towered over him.
Last year he’d ached to say yes to her offer of a one-night stand, but principle had left him lonely that night. Her reputation preceded her: Sophia Stanton, the wildly sex-positive billionaire heiress who bedded men the way most women shopped for shoes.
Now, though, their mouths fit perfectly together, tongues tangled as his hands, big and strong, plunged into her long hair, grasping close to her scalp with an intensity that made her gasp—and made him grin. Power was intoxicating, a thrill ride that made the kiss like a roller coaster, highs and lows a dizzying race, stomach fluttering, body braced for impact.
He knew exactly where he wanted to impact her, too. 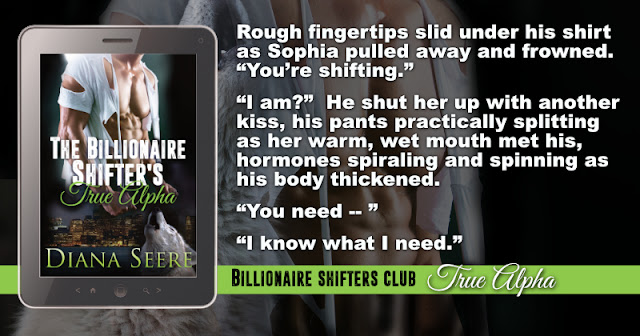 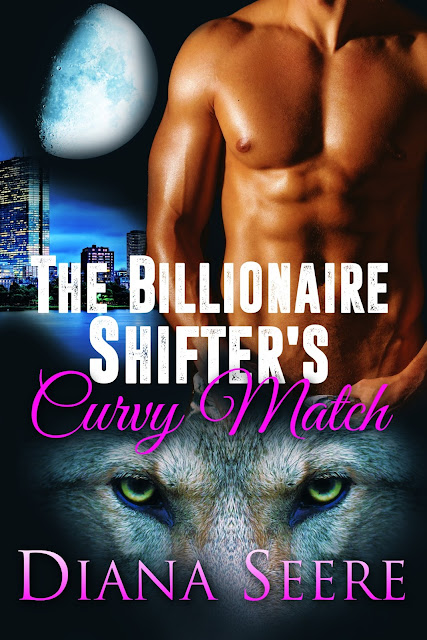 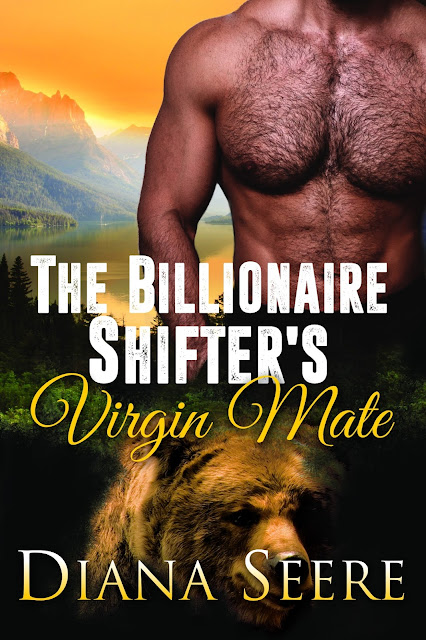 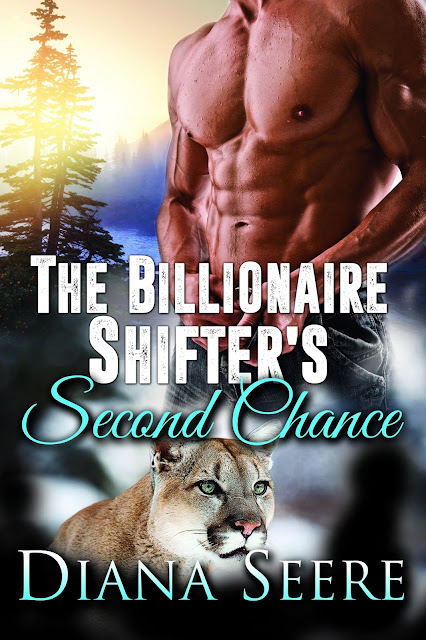 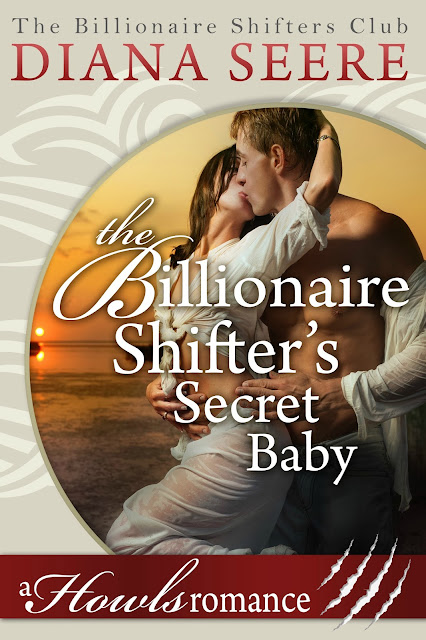 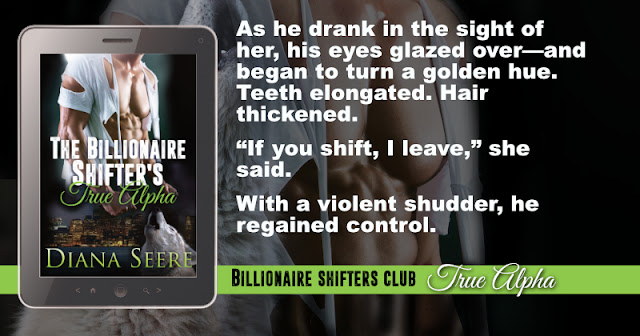 Diana Seere was raised by wolves in the forests outside Boston and San Francisco. The only time she spends in packs these days is at romance writing conventions. In truth, Diana is two New York Times and USA Today bestselling authors who decided to write shifter romance and have more fun. You can find “her” on Facebook at Diana Seere’s Facebook Page: https://www.facebook.com/DianaSeere

Sign up for her New Releases and Sales email newsletter here: http://eepurl.com/beUZnr 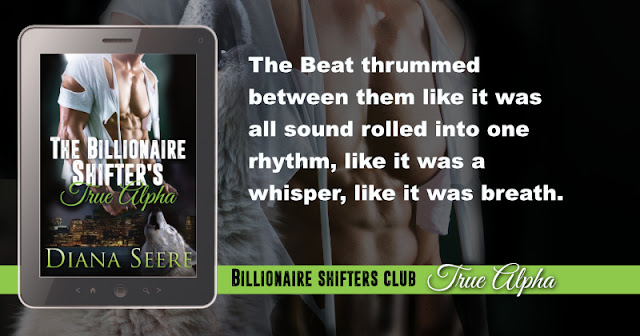