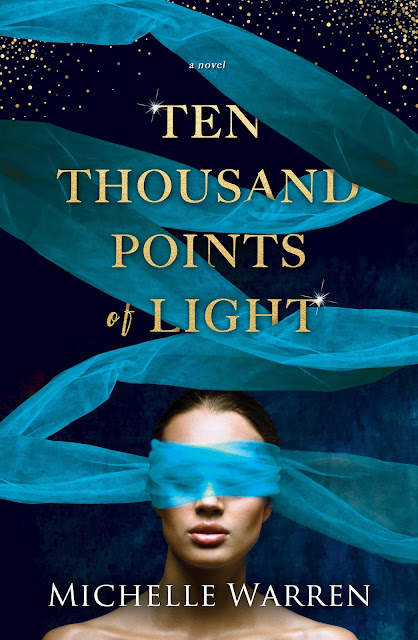 Five years ago an unthinkable tragedy slashed Cait London’s life into two parts: before she had amnesia and after. Determined to keep her past hidden and start over, she moves to Chicago and plunges into a new job—all while keeping a walled distance from everyone she meets.

It’s not long before Cait reconsiders her solitary existence, and soon she’s stepping beyond her boundaries and taking unthinkable chances, like crushing on her impossibly sexy landlord, Evan Wade. He’s flirty, annoying, and with him living in the same apartment building, she can’t stop thinking about him. If she can sleep with him once, perhaps she can get him out of her system. The problem is, Evan seems bulletproof to her advances. As the two develop a connection, it becomes clear Cait may not succeed before her heart remembers what it feels like to love.

Ten Thousand Points of Light is an immersive contemporary romance about the intensity of first loves, the heartache of loss, and the power of forgiveness. 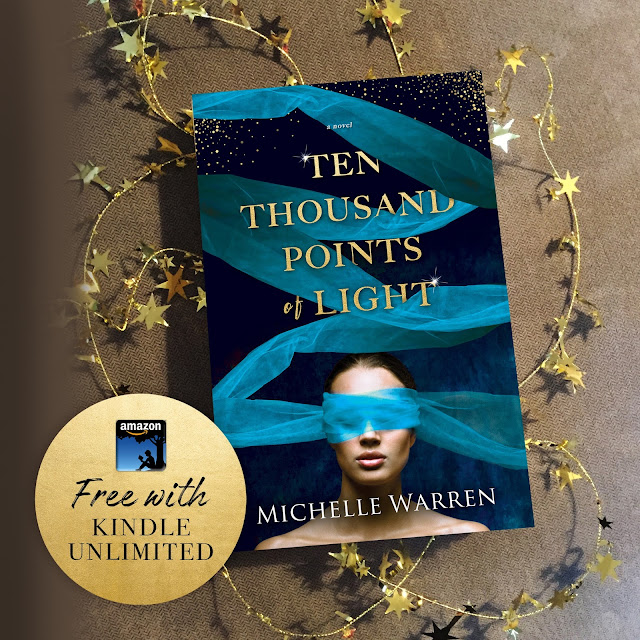 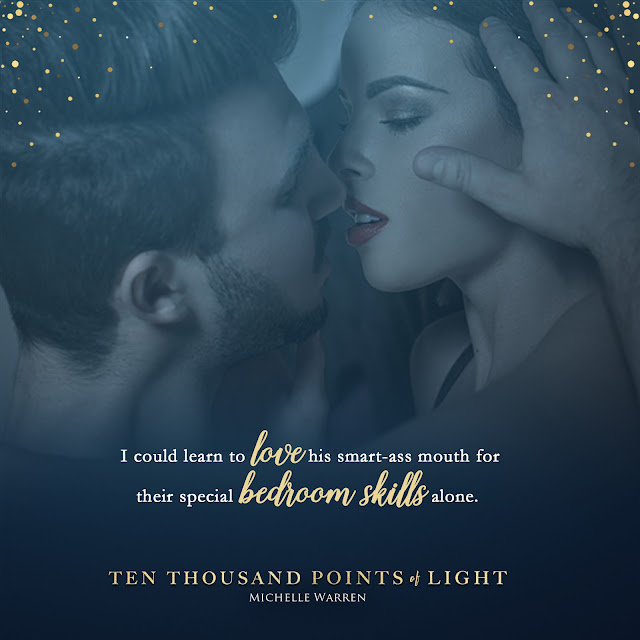 In my bathroom, a man kneels on the floor inspecting a gigantic hole of exposed pipes with the roaming beam of a flashlight. I fold my arms and lean into the doorframe.

When I left to meet Aggie everything was functioning. My gaze examines the small room, picking out details: my expensive towels soak up a deluge of water pooling on the tiled floor, there’s a large pile of powdery, crumbled drywall, and then there’s the issue of ass crack—in my face. It is toned and tight, but still, it’s connected to my landlord, Evan Wade.

“Pipes burst, leaking a damn waterfall into 5A,” he says, not bothering to glance my direction.

“Did you have to use my good towels?” I purse my lips.

“I thought about using your sexy lingerie.” He eyes the laundry basket of delicates now sitting on top of the sink. “But the fancy towels seemed like a better option.”

“Thanks, appreciate it.” I sidestep him, snatch the basket, and carry it to my bedroom, hiding it in my closet. If he had scrutinized it closer, which he probably did, he would have found an embarrassing amount of granny panties and more sports bras than a Lululemon.

“A week,” his muffled voice answers.

“What?” I race back only to find his sharky grin. Two vertical dimples slice beneath a permanent, mocha-colored five o’clock shadow. They punctuate his bronzy sun-kissed skin, making his caramel eyes gleam with amused delight. My gaze intensifies.

“Just kidding. And you forgot this one.” Evan tosses me a ball of fabric. I catch it and glance at it. My mouth drops open. A smiling kitten stares back from the crotch of a pair of panties. Pussy panties. My cheek temperature flickers between sweaty hot and icy cold.

I shove Aggie’s gag gift into the pocket of my running pants. “Funny.” I deadpan to appear unaffected.

Still, Evan seems thrilled for tormenting me. It’s something he’s excelled at since the day we met. It may be I’m still tipsy from drinking, but at recalling his history of irritating jokes, I pause. I cock my head and stare at him in confusion when a doubtful revelation hits me. Is this what Aggie was talking about? Is Evan flirting with me? Has he been flirting all this time?

I shake my head. Impossible.

“It’s too late to get the parts I need. So tomorrow.” He wipes his dirty hands on one of my towels, leaving a dark streak. I bite the inside of my cheek to stop from scolding him.

“That’s not going to work. I have an appointment first thing in the morning and I need a shower.” I gesture to my sweaty T-shirt.

“No kidding, Cat, I can smell you from here.”

“It’s Cait, you ass.” I kick off my loose sneaker, tossing it with my toe in his direction. I aim to nail him in the head but he dodges away. The shoe ricochets off the wall, tumbling to the floor.

His grin widens. “I’m kidding, Miss London. You smell like roses, as always.”

“Seriously, what am I going to do?”

“Can’t you use Gusterson’s shower?” He quirks a surly lip because he already knows the answer—no. Mr. Gusterson lives across the hall, but I’ve never seen the man. I’m unsure anyone has.

For this comment, I kick my other shoe in his direction.

“Ow!” This one smacks his sizable bicep, protecting his handsome face. I suppress a triumphant smile.

Evan crouches and stands in one fluid motion of sinewy muscle. He meets my gaze, and then rakes a hand through his tousled chestnut-colored hair. “Fine. You don’t have to beg, Kitty Cat, you can use mine.” He puffs his chest and flashes his brilliant white grin.

Definitely flirting. Though I shouldn’t be surprised. How many times in the last year had I seen him at Mr. Moon’s Coffee House, sitting at a table and flirting with some girl? There were too many times and too many girls to count.

Evan takes his time sliding past, I think, purposely brushing the heat of his body near me. I pin myself against the wall, unwilling to allow our skin to touch. When will he grasp how annoying I find him?

“I’ll pass.” I latch my hands on my hips. This is me sending a clear message. I’m not flirting.

“Suit yourself.” Unswayed, he lumbers for the door.

“What about these tools?” I gesture to his mess.

“I’ll be back tomorrow.” He turns, arms wide, palms skyward and strolls backward with a confident teeter. He’s hitting me with his smile again and those damn dimples, like they’ll make this situation better.

My teeth clench. If I had something else to throw at him I would. When he disappears, I remove my cell from my pocket and text Aggie. Before I do, I glance at my front door, which he left wide open. His footfalls descend the stairs to his apartment on the first floor. 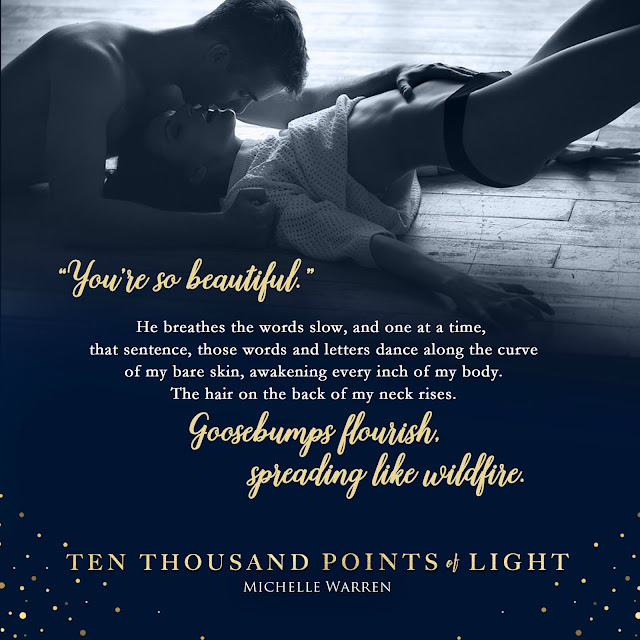 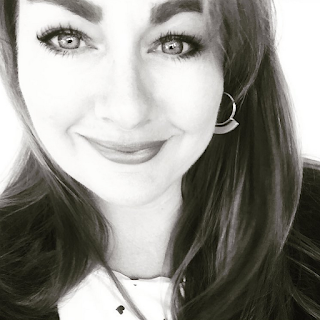 If Michelle Warren had a spirit animal, it would be a tiger in a pink tutu, riding a Harley through a ring of fire. She lives in Chicago, dreams of California but hails from Baltimore. She has a slight obsession with travel, sunshine, Double Chocolate Milano cookies and writing novels. She didn’t travel the road to writer immediately. She spent over a decade as professional illustrator and designer. Her artistic creativity combined with her love of science fiction, paranormal and fantasy led her to write her first novel. 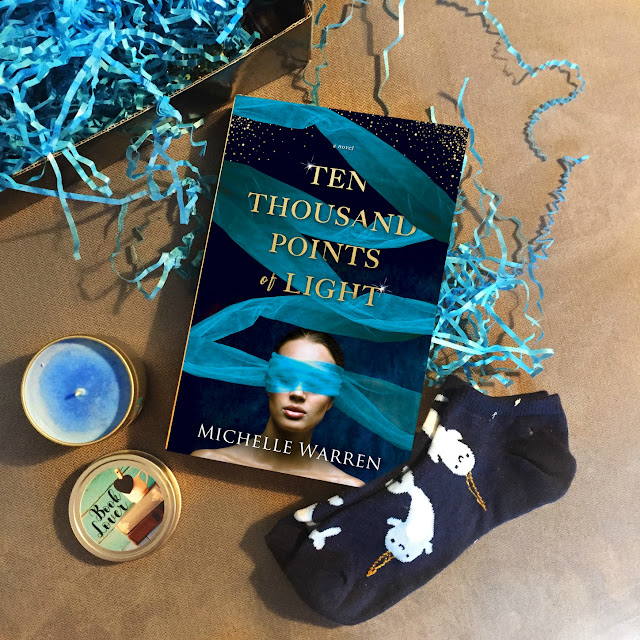