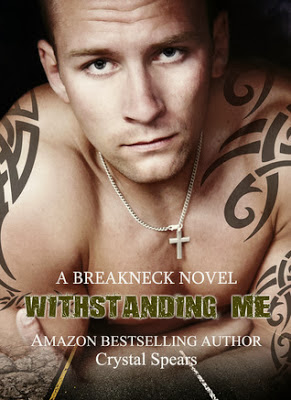 While the chaos and bloodshed have slowed for a short period, life is never quiet in the world of Breakneck. The club is taking time to regroup from internal betrayal and the changing of the guard in a rival group.

Zig Zag became a father at the age of thirteen. While raising a child has never been easy, now his eighteen year old daughter Tatiana makes his life downright hard. She has caught the eye of Travis, the new President of the rival MC Gunners, but all she really wants is Shadow, the newest addition to the Breakneck family. When Shadow’s rejection sends Tatiana running from the only family, home, and safety she’s ever known, ZZ is crazy with worry. The distraction caused by Tatiana’s disappearance could prove to be Zig Zag’s downfall.

If that isn’t enough, ZZ finds himself rampantly attracted to the one and only Storm. She’s beautiful, quick and witty. Their friendship is the one thing that keeps him from growing crazy, and Storm stands by ZZ through all the turmoil. Zig Zag is not accustomed to hearing the word no, so Storm’s constant withstanding just draws him in deeper. Their friendship is one thing keeping him from going crazy, until one night…

The club is regrouping and rebuilding from the mayhem known as the Russian Mafia. A hit is ordered on Tatiana, Storm, Winter, and Piper.

Braxxon is out of reach while he helps Greg Cage deal with some dirty business.

She is the Bestselling Author of Seize Me. She is currently working on the second novel in her “Breakneck Series”.

Withstanding Me, ZZ and Storm’s story, is the second book in the Breakneck Series. The books may be read as standalones, but  as always, you will have a more in-depth understanding of the characters if you start at the beginning with Seize Me.
ZZ has never been in love. Ever. In fact, the only women he’s felt any true emotion for have been blood relatives. He’s also not used to hearing the word, “no”, until he sets Storm in his sights and won’t look away. The very emotion that Storm invokes in him is foreign and confusing.
“How much longer are you gonna keep withstanding me, darlin’?”

… And what she says blows my fucking mind wide open.

“Just until you fall in love with me,” she says seriously.

She slowly backs away smiling. “Oh, but you will and it’ll be with me,” she says with a wink.

Fuck Me.
Storm.  I tend to think her life has been more of a hurricane or tsunami… The name Storm just seems too tame for the misery she’s endured.  Loveless childhood, human trafficking, rape, drug abuse.  I’m glad they don’t call her Sunshine. Despite her past, she has a remarkably positive personality and sticks to her standards on how she should be treated.
I enjoyed reading Withstanding Me. At times it was a little tricky keeping all the different POVs straight (since you don’t just hear from ZZ and Storm) but I can see where the author is creating leads for the new Breakneck stories to follow.  I look forward to reading future books and seeing more of the characters from the first two.
~ Review by Jennifer

a Rafflecopter giveaway
Posted by Give Me Books at 7:39 am