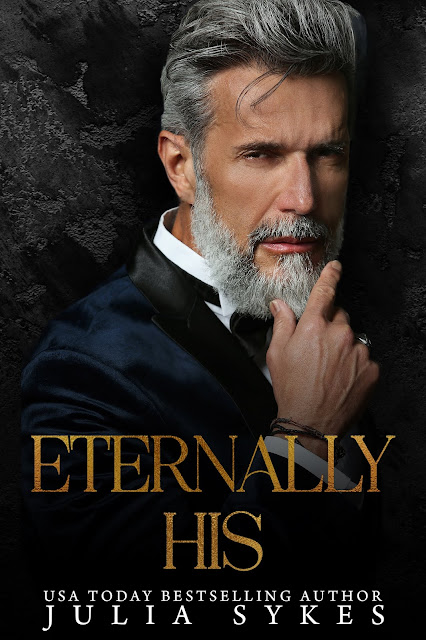 He’s a cold-blooded criminal. Nearly twenty years older than me. My stern captor. And worst of all...my husband.
I betrayed the cartel. Now, he’ll make sure I can never leave it. To keep me in line, I’ll be forced to spend my eternity with a ruthless criminal.
If only I hadn’t harbored a traitorous, girlish crush for years. If only the way he makes me tremble wasn’t equal parts fear and desire. If only that stern black stare didn’t make my knees weak.
It would be so much easier to defy him.
My unyielding jailor.
My husband.
My forever. 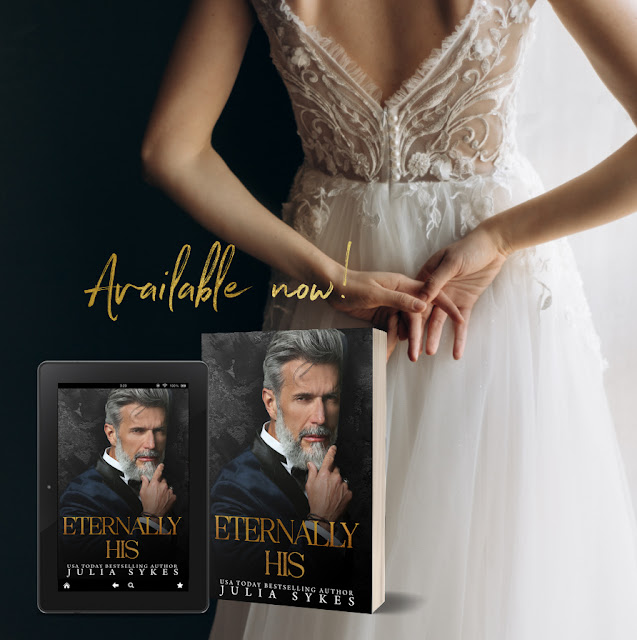 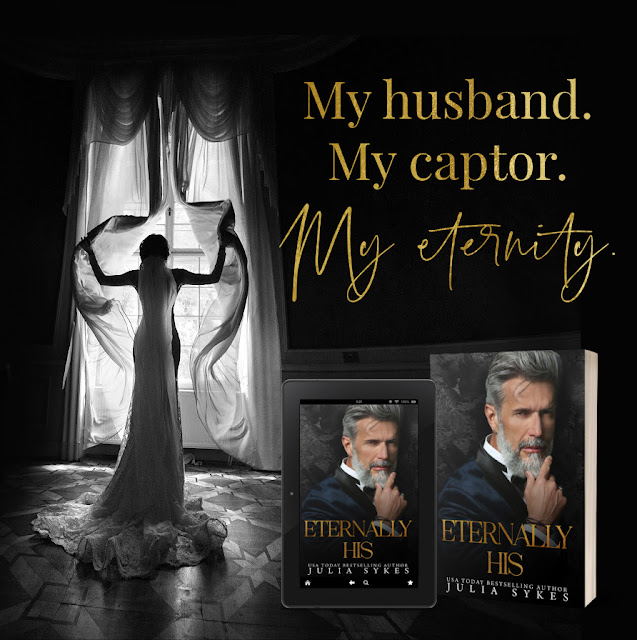 EXCERPT
Blood stained the hem of my ivory dress, and three small, ruby red dots winked amongst the crystals that encrusted the bodice. No one seemed fazed by the gore on my wedding dress. Not one of the hundreds of people filling the pews so much as murmured about the violence that’d exploded outside the church only minutes ago.
No one cared that my soon-to-be husband was a cold-blooded killer who’d committed murder to claim me for himself.
I didn’t want to marry Sebastián Castillo, the brutal older man who was waiting for me at the end of the aisle. His black eyes flashed when they met mine, his ruggedly handsome features sharpening with something hungry and possessive.
My slow steps toward him faltered, and my ruthless escort’s grip on my arm firmed, the head of my fiancé’s cartel dragging me along to face my fate. My punishment.
I’d betrayed his cartel, and now I was paying for it. I faced a life sentence, forever captive to Sebastián. He would keep me in line, ensure that I never jeopardized their organization again.
Once, I’d thought of him as my savior. He’d protected me when no one else would. No one else ever had.
Now, my fierce protector would be my jailor.
Dread pooled in my belly as I reached the altar. Sebastián’s huge hands engulfed mine. His knuckles were still raw and red from the violence on the church steps, when he’d murdered a rival with his bare hands. All for me. To claim me forever.
The organ music quieted, and the priest began to speak. The words were a meaningless rumble on the edges of my consciousness. All I could focus on was breathing and remaining upright. I kept my gaze downcast, too frightened to look into Sebastián’s dark eyes. I was afraid of what I would find burning in their fierce depths. I was afraid of what it would make me feel.
I hated him. I hated that he was taking my freedom, my fortune. He would take possession of all that was mine, including my body. My virginity.
Even now, my fingers tingled in his gentle grip, electricity dancing between us.
One hand released mine to curl two fingers beneath my chin. The priest had stopped speaking. There was a ring on my finger. It was done, the ceremony that sealed my fate was over.
My eyes lifted to Sebastián’s. White-hot flames flickered in the depths of his dark gaze, and the weathered lines that marked his tanned face were drawn with possessive hunger. The golden light that filled the church gleamed over the silver at his temples and in his close-cropped beard. In my strangely detached state, he seemed to shine with an almost ethereal light. Once, I’d thought of him as my avenging angel.
His face dipped to mine, and his warm lips caressed my mouth. A spark ignited between us, and the tingle in my fingers raced through my entire body, making me dizzy with the visceral rush of desire. I gasped, and a low growl escaped him as he took the invitation to plunder my mouth. His big hand cupped my nape, tipping my head back to claim me more deeply, branding me with his tongue in fierce, domineering strokes. He touched me as though he had every right, as though he owned me. And now, he did.
My husband.
My captor.
My eternity. 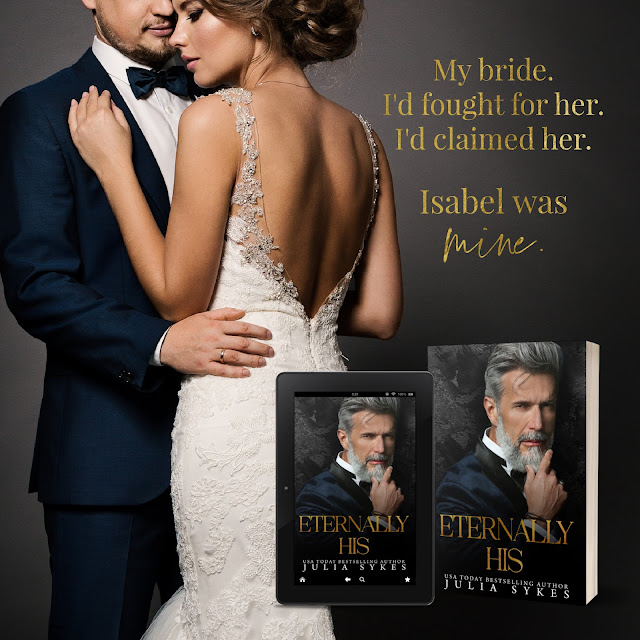 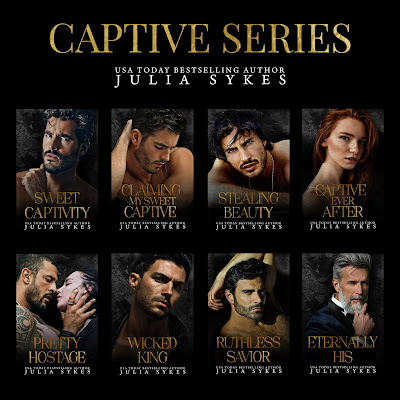 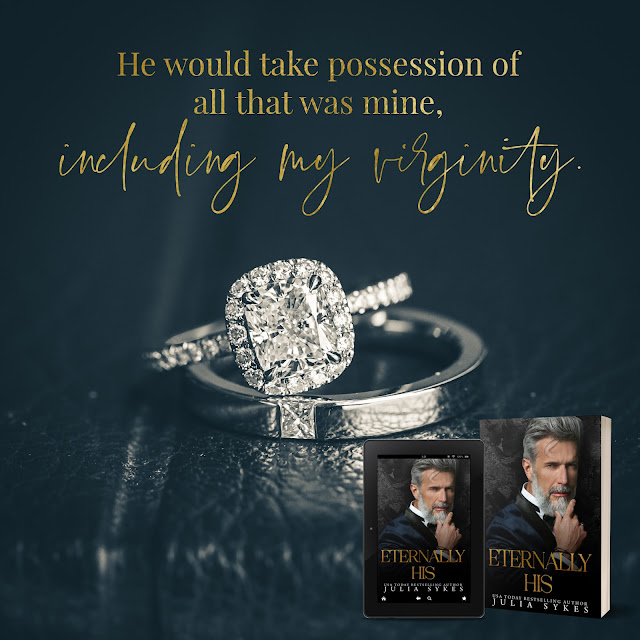 AUTHOR BIO
Julia Sykes is a USA Today bestselling author of dark and steamy romance. When she's not writing, she's usually reading. Other than reading, her obsessions include iced coffee, unicorns, charcuterie, aged Manchego cheese (or any cheese, really), fancy dresses, and Roman empresses. An American expat, Julia now lives in her adopted, beloved home of York, England. Most days, you can find her wandering the cobbled streets and daydreaming about her next novel. Find out more about Julia's current and future projects at julia-sykes.com.