Blog Tour - Everything I Shouldn't by Stacey Mosteller 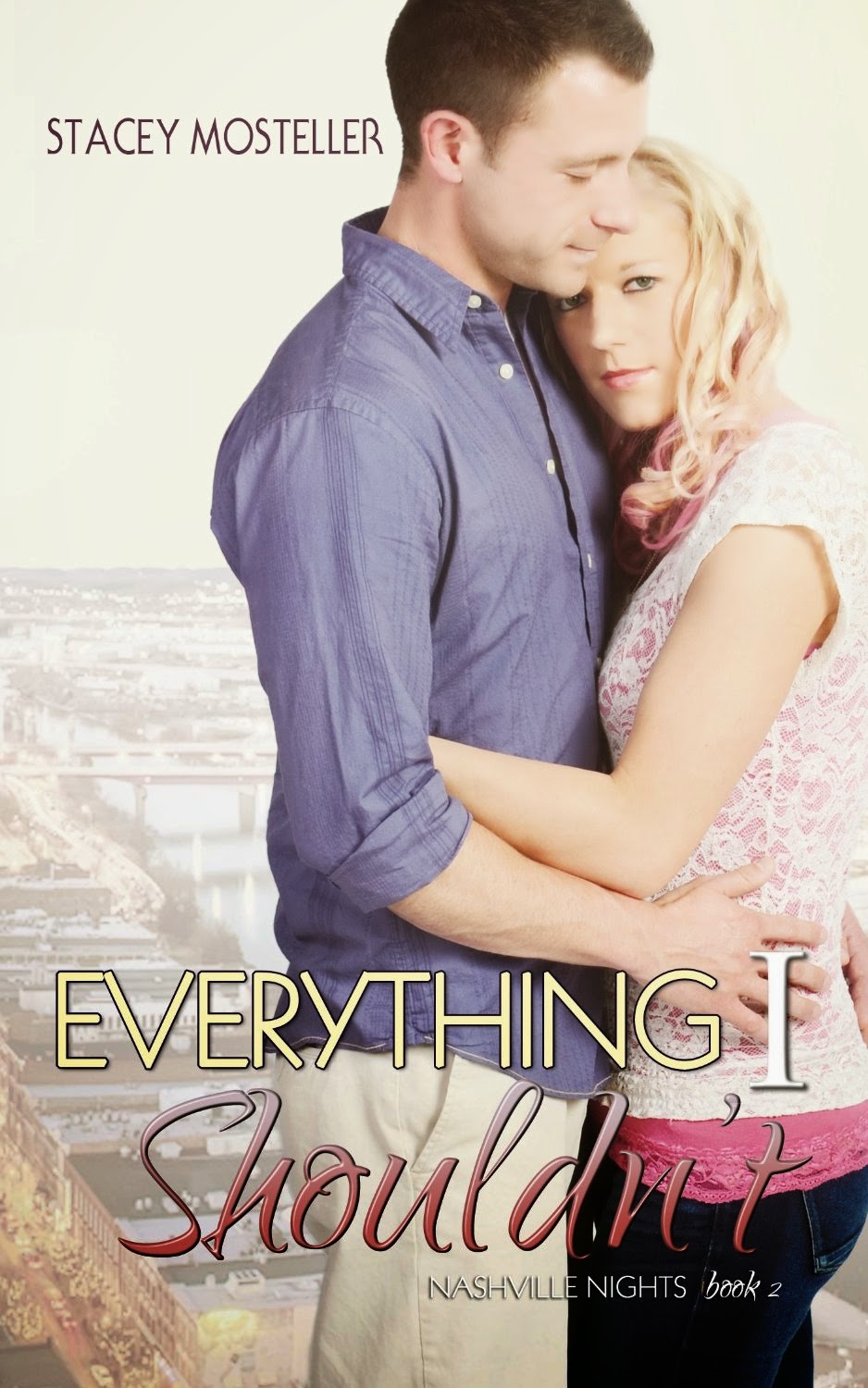 I didn’t plan on David getting suspicious, and I definitely didn’t plan on getting caught. My selfishness has cost Jeremy everything, my brother won’t even look at me, Lyric must hate me for practically blackmailing her to keep silent and my best friend is barely speaking to me.

Now my life is full of secrets and lies. The people around me have been affected by the choices I’ve made and the lies I’ve told. But what will they do when they discover the biggest secret of them all?

Jeremy is everything I shouldn't want, and the person I can't live without.

Hmmm, I do so love a forbidden love story, especially when the forbidden love is best friend’s little sister love. There’s just something about those that really suck me in and I don’t know why. I mean, it’s not like I ever hooked up with my big brother’s best friend... When I finished Save Me From Myself – book one in the Nashville Nights series – and read the synopsis for Everything I Shouldn’t, I could barely contain my excitement. I knew, I just knew, that I was going to enjoy watching Jeremy and SarahBeth sneak around. And oh boy, did I ever!
SarahBeth Pearson made some pretty bad decisions in order to be with Jeremy Meloni, the man she has loved for as long as she can remember. In trying to keep her relationship with her brother’s best friend a secret, she lied to her friends, manipulated people and disappointed herself and David. Jeremy knows that he should have been honest with his friend when it came to his feeling for SB. For years he’s struggled to keep his affections platonic, but it’s simply impossible to ignore the chemistry. Jeremy didn’t want to lose David’s friendship or make SB have to choose between him and her brother. SarahBeth didn’t want her brother to derail the relationship she waited years for. Now, everything is out in the open and more hearts than just her own have been shattered. How can she make David see that Jeremy is everything she wants, even though she shouldn’t?
I fully expected that Everything I Shouldn’t would pick up at the end of Save Me From Myself and deal with the fallout from David’s discovery, so I was surprised to find myself travelling back in time with Jeremy and SarahBeth to see how their relationship developed. It was a pleasant surprise, however, because the to-and-fro between them as they tried to simultaneously deny and act upon their feelings was excellent. It also allowed me to develop my own relationship with Jeremy and SB, who didn’t come off in the best light in book one. The dual POV offered insight into both sides of their story and while I liked SB, I loved Jeremy. His conflict went beyond the norm when it came to wanting his best friend’s sister, because of the age difference between them and his role as one of her guardians. I was at times a little frustrated by SB’s childish behaviour – I felt she took it too far, like she was potentially a little emotionally stunted – but was happy with how Stacey Mosteller weaved that immaturity into the story and allowed Jeremy to react to it.

Truly, my only complaint is that the story ended before it should have. There is a minor cliffhanger, which based on my assumptions for how the story would play out, I wasn’t expecting. I can’t complain too much though because it simply means there is more best friend’s little sister love in my future. And I do so love that.
Everything I Shouldn’t is the second book in the Nashville Nights series. There is small cliffhanger.
~ Review by Beth 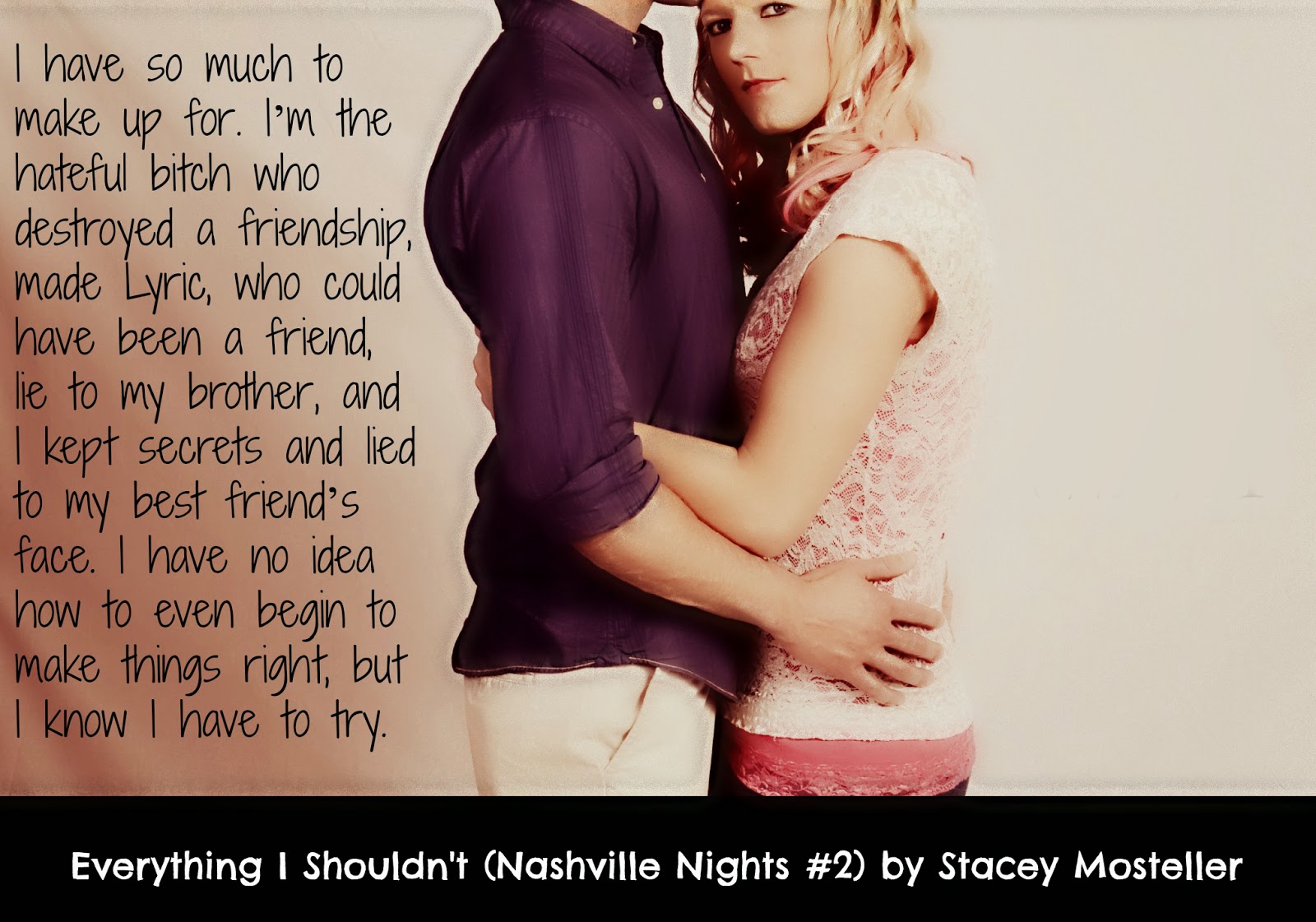 Stacey is a wife, reader, author and mother to 3 boys, ages 15, 14, and 8 – not necessarily in that order! After spending the first half of her life in a small town outside of Philadelphia, PA, her parents moved to another small town in North Carolina. She married her husband after dating a total of three months and knowing each other for six! People thought they were crazy, but 2014 marks their 10 year anniversary, so it obviously worked out! She loves to read and can usually be found curled up with her iPad when she’s supposed to be writing or creating playlists on Spotify!

a Rafflecopter giveaway
Posted by Give Me Books at 2:20 am