TAKE – verb: to reach for and hold in one’s hands or get into one’s possession, power or control.

Logan Mitchell is a man who’s always been more than happy to take what he wants. It’s a philosophy that’s proven lucrative in both his business and personal life, and never was it more apparent than the night he laid eyes on Tate Morrison. After pulling out all the stops and convincing the sexy bartender to give him a try—he’s hooked.

Now, Logan finds himself in a predicament that demands more from him than a smart-ass answer and his innate ability to walk away when things get too deep.

He has a choice to make, and it’ll force him to do something he’s never done before—take a chance.

Tate Morrison knows all about taking a chance. He took the biggest one of his life the night he showed up at Logan’s apartment to explore his unexpected reaction to the man.

Ever since then, he’s thought about little else.

At first he was convinced his attraction was based solely on his body’s curiosity. But the more time he spends with the silver-tongued lawyer, the more Tate realizes that their physical chemistry is only the beginning.

He’s starting to catch a glimpse of what life with Logan would be like, and it’s one full of excitement and satisfaction—a far cry from what he had in the past with his soon to be ex-wife.

Each man will face their fears as they begin to understand the true meaning of give and take. Their feelings for one another will be tested, as will their very beliefs. But now that they’ve found love where they least expected it, will they be brave enough to reach out and take it?

TAKE will be available to buy on July 8

I’m not going to beat around the bush – this book, Take, is one of my very favourites of 2014. I felt it from the first page and never waivered. I loved every moment, every feeling, every challenge, every steamy, sexy scene. I’m not too experienced with M/M romance but when I read Try, I knew I wanted more from Logan and Tate. And now I've finished Take, I still want more. I have all fingers and toes crossed that this is just the beginning of their story and not the end, because I’m more than a little attached to these boys.

Logan Mitchell has never had a problem going after what he wants. As a lawyer, he argues for a living and he uses that to his advantage. Just like when he convinced straight bartender, Tate Morrison, to try. Now he's addicted and has a decision to make - to take this chance to be with Tate, or not?

Tate Morrison never expected to be drawn to a man but he can't stop thinking about the sexy lawyer and the way his body reacts to him. But it's not just physical attraction - not anymore. The more time he spends with Logan, the more he's willing to risk to be with him. Logan and Tate will both face obstacles as they attempt to move forward and they both must decide if it's worth the risk to reach out and take what they want...each other.

I didn't want this book to end. I'm not one to slow down as I near the end of a book - I don't have the patience for that - but I was tempted to try that strategy because I wanted to spend as much time with these two as possible. Their story was always touching, sometimes funny, very sexy and simply beautiful. The chemistry between the men was perfectly in balance as neither one overshadowed or dominated the other. Their individual reactions to their situation were real and raw and my heart ached for both Tate, as he attempted to reconcile his life with this big change, and Logan, as he tried to face his past so he could embrace his future.

I want more for these men and from these men. Just like Logan and Tate, I've become addicted and I don't think I'll ever get enough of them.

Take is the follow-up to Try. 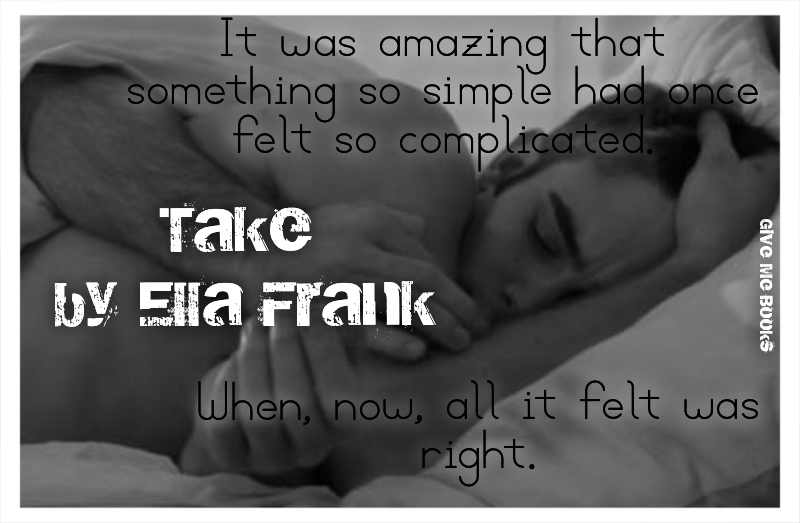 I have been eagerly awaiting the release of Take ever since I finished Try at the beginning of the year. Try was my first M/M book, and I was both ambivalent and curious going into the story. Ella Frank blew my socks off, opened me up to love M/M books, and Try became one of my top five reads of the year. So I have been dying to get my hands on Take, and completely devoured the book. It is not that sequel where the author leaves you disappointed after the genius of the first book, in fact Take may have even surpassed the perfection that is Try! It has everything I ever wanted in a book, and even a few things I didn't know I wanted! Tate and Logan are hot, sexy, fun, and incredible characters. The banter was at times funny, at times serious, and at times over the top steamy. The insane chemistry between Tate and Logan continues to grow, leaving the reader hot and bothered. Ms. Frank has a definite talent for writing the dirty parts, but also for balancing the steam with the plot and using the sex to add to the story and help the characters develop.

While the sex is explosive, Take isn't just about the erotic. It is about self discovery and personal growth. In Try, Tate works through his feelings for Logan, and finds the courage to fall in love with a man. Take sees the aftermath of Tate’s initial discovery, facing his friends and family as a changed man. We also see Logan fighting through personal demons, dealing with the baggage left from previous relationships. Logan exposes a new, raw side that was not as apparent in Try, an added dimension to his character. It is enlightening to watch Tate and Logan discover themselves and their relationship, learning what is worth fighting for and when it is time to step away. The courage and honesty present in their relationship is truly inspiring.

As a woman, I will never fully understand the male psyche, and a gay male relationship is something I will never experience. But Ms. Frank put me in the book; I became a part of the relationship, discovered Logan and Tate’s wants and needs, and experienced the emotions and revelations as if I was living them myself. I was laughing out loud, angry and shocked, as well as in dire need of a cold shower. This book tugged at my heartstrings, as well as my panties, and I loved every minute of it! Needless to say, this is a 5 explosive stars read and I highly recommend it to everyone!
~ Review by Alicia 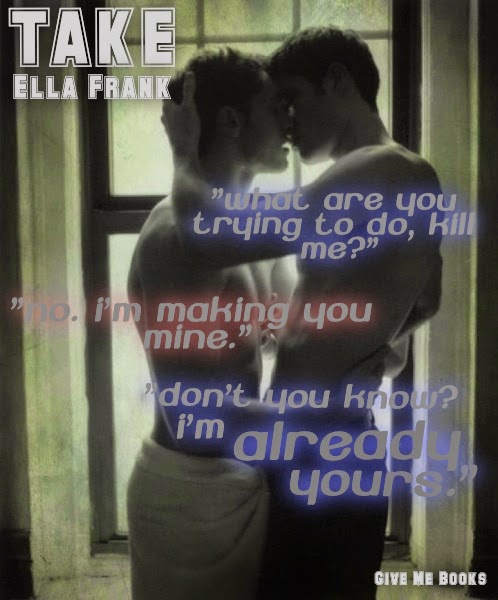 “So what?” Logan challenged as he pulled his keys from his pocket.

“Excuse me. I’ll have you know I was driving this baby all through college and she still runs like a dream.”

Tate watched as Logan walked over to run his hand over the scratched-up tailgate, and he was amazed that he even made that look sexy. Like he was stroking a lover.

Now around at the passenger’s side, Logan opened the door and looked at him over the bed of the truck. “Yeah. Jealous?”

Laughing, Tate walked over to where Logan stood with a hand on the door and kissed him slowly on the mouth.

Logan stepped forward, crowding him back against the inside frame of the vehicle. “You’re not ready for the or else…”

The minute she began her love affair with reading, she became and avid supporter of the romance genre and has never looked back.

Ella is Australian born and bred but currently resides in Houston, Texas with her husband.