July 10-Give Me Books Blog

July 16-Natasha is a Book Junkie

Happy endings don’t come easily. They’re hard-won and Clay Nichols is going to have to keep earning his…

But life doesn’t work that way and the fiery lovers run into a slew of new challenges as Clay tries to put a ring on it. Trouble looms in every corner–trouble from clients, trouble with timing, and, most of all, trouble from her past returns on their trip to Vegas. A dangerous man who knows much more about Julia than he should surfaces in Sin City where they’re supposed to be enjoying a weekend getaway. Following her in the casino, watching her every move at the pool, targeting her as she plays poker.

Too bad Clay is called away repeatedly, leaving Julia alone in a sprawling hotel full of dark corners, back rooms, and unsavory characters. Can Clay save her from danger one more time, and then finally get down on one knee? Or will he be too late for the woman he adores?

Read on in ONE MORE NIGHT, a novel in the New York Times and USA Today Bestselling Seductive Nights series packed with more sex, more dirty talk and more danger. And per your request, the recipe for Julia’s award-winning cocktail, the Purple Snow Globe, has finally been revealed in this ebook!
ADD TO GOODREADS 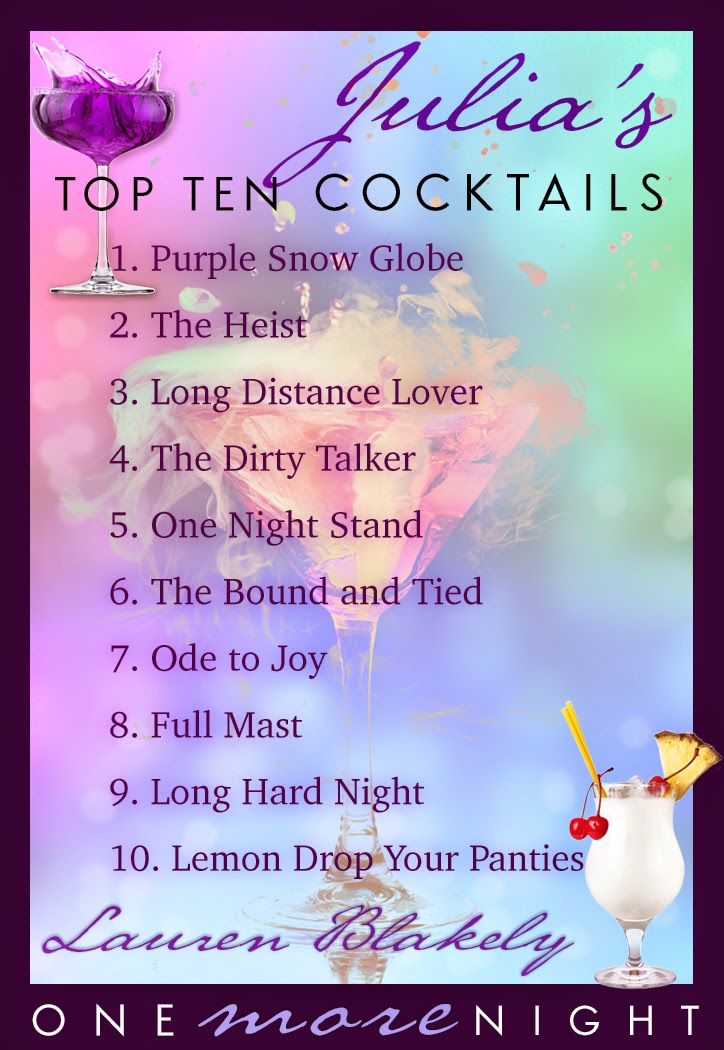 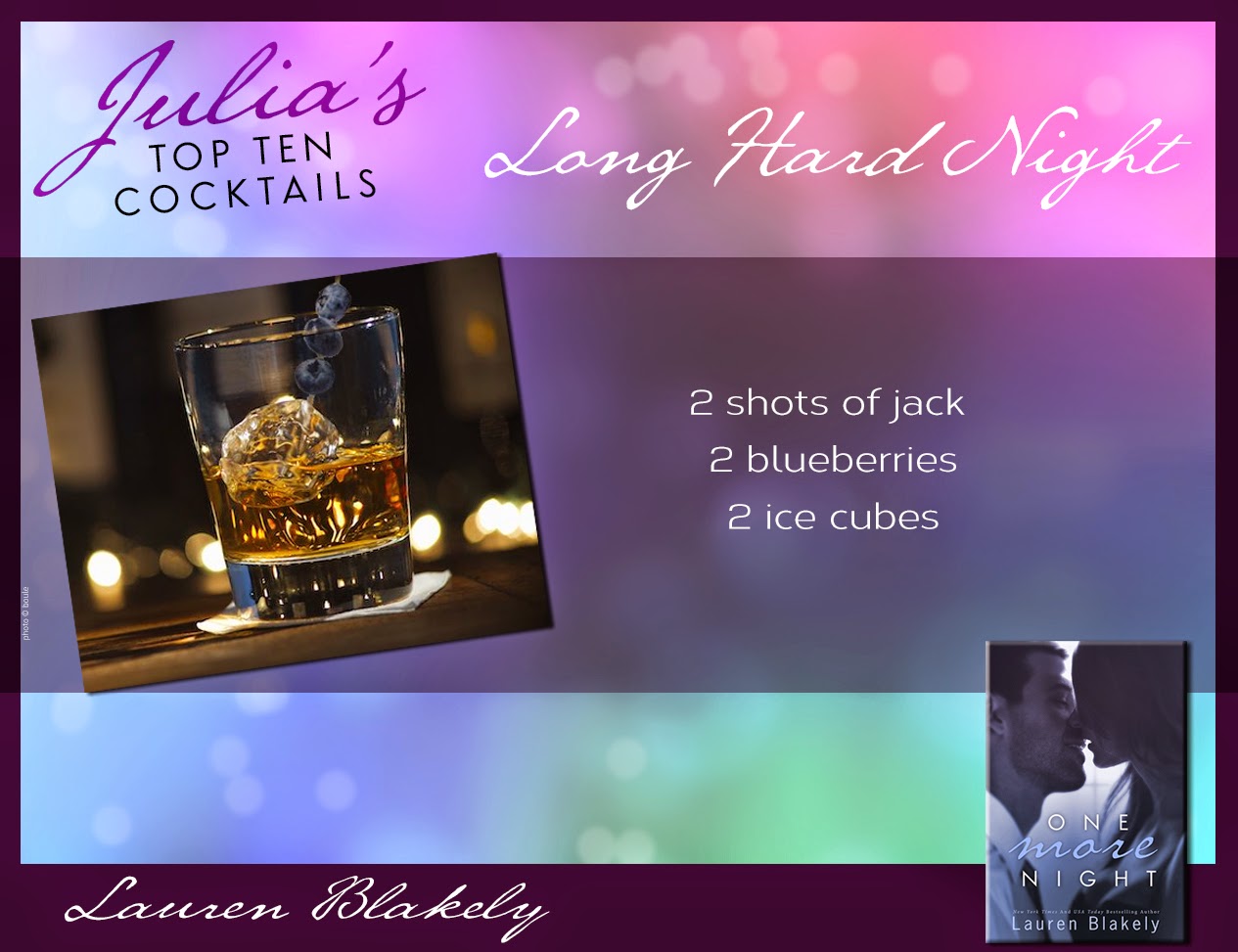 Oh hello Clay, it's lovely to see you again... I'm not even sure I have the words to express how ridiculously happy I was to hear that the sexy-as-sin lawyer and his beautiful bartender were back for One More Night, because I loved them together in the original First Night. And in the subsequent Seductive Nights Trilogy. And now I've loved them on a weekend getaway to Sin City. Lauren Blakely did an excellent job of giving them (and us) a happy ending... *Ahem* Pun entirely intended.

Entertainment lawyer Clay Nichols worked hard at getting his happily ever after with his woman. After rescuing her from mob boss Charlie, and moving her into his home in New York City, it's time to take the next step.... He's going to put a ring on her finger and make her Mrs. Nichols. Julia Bell loves her dirty-talking man and is hoping to find him on one knee during their weekend getaway so they can start their future together. The stage is set for an epic proposal in Las Vegas but only if Clay can get past the obstacles in his way and get Julia alone and away from the dangerous element that's trailing her around the city...

Hear that? That's the sound of a grown woman squealing with excitement over a book. And fanning herself because the heat just went through the roof. Clay and Julia had a chemistry that sizzled and steamed in the Seductive Night Series and after finishing One More Night, I can safely say that they are as hot as ever. I mean, I practically burned up and then melted during one deliciously sexy encounter involving a string of pearls, a private jet and a very dirty mouth. I am a big fan of Lauren's and I had high hopes for this book. I wasn't disappointed. As always, she delivered a fun, fast-paced and enjoyable story. There were cameos from beloved Blakely characters, plus a newbie that I can't wait to read more about. There were tender moments and moments that made this girl shake her head at the idiocy of men. There was enough tension and intrigue to make my heart beat fast and keep me reading well past my bedtime. And question if I knew what was coming next - aside from Clay and Julia, that is.... Hmm, I should probably stop with the dirty puns, shouldn't I?

One More Night is the third book in the Seductive Nights Series. No cliffhanger.
~ Review by Beth

5 STAR REVIEW FOR NIGHT AFTER NIGHT

5 STAR REVIEW FOR AFTER THIS NIGHT

“You sure you’re not sneaking off to Los Angeles to get me a ring?”
He laughed once more. She’d been trying to get it out of him since the night he told her he’d wanted to take her to Vegas for the weekend. Even with her business meeting, she was hunting for clues of a proposal. Only his brother knew he planned to ask her to marry him this weekend. “I’m not going to Los Angeles to get a ring, but even if I were I would never tell you,” he said.
“You do realize that gives absolutely nothing away?”
He nodded, tapping her forehead lightly, then running his finger down to her nose. “I know,” he said, then nibbled on the end of her nose. “Well, enough about rings. What’s in that box there you’re hiding by your leg?”
“You saw it?”
“My gift-spotting skills know no bounds.”
He handed her the turquoise-wrapped box with a white bow on it. She eyed the bow. “In case you want to tie me up on the plane, looks like we already have something to use.”
His dick twitched against the denim of his jeans. She was always on the same wavelength as he was. “I may need to tie up your hands as a reminder to bring your poker face to the meeting today.”
She gave him a sharp-eyed stare. “Do not ever doubt my poker face. It is masterful,” she said, as she tugged one end of the ribbon, letting the white satiny bow fall across the shiny wrapping paper. Ripping off the paper, she popped open the top of the box, and there it was. That glow in her eyes. The absolute joy in receiving gifts. She was a delight to give presents to because she never faked her appreciation. Reaching inside the box, she wrapped her fingers around the necklace then gently lifted the long strand of pearls. “Oh my God, they’re stunning. They’re so fucking gorgeous.” She draped the pearls over her hand, the long strands like waterfalls of smooth, rounded beads. She gazed at them like they were precious, a fitting response, since they were. “They’re real,” she said, with wonder in her voice as she looked up at him.
He nodded. “I would never give you something fake.”
“I’ve never had pearls before. I’ve never thought of myself as a pearl person.”
“Then let me show you how I want you to wear them, so you can see how absolutely fucking sexy a pearl person can be,” he said, standing up and making his way to his suitcase. He opened one of the zipper compartments where he’d tucked a dress for her, and brought it over. “Another gift. Put this on.”
“Now?”
He nodded. “Yes. Model it for me.”
“As you wish,” she said, standing up and glancing once at the cockpit. “What about the pilot?”
“I told him we’d be making full use of the plane and he said he’d have his eyes on the sky the whole time.”
“Then keep your eyes on me,” she said, looping the strand around her neck, then stripping off her skirt, letting it pool at her feet, her gaze locked on him the whole time. He watched her, growing harder with each layer she removed—now her shirt, then her lacy bra. He reclined the spacious leather seat, taking in the show, savoring every second of her undressing.

Night After Night / After This Night / Seductive Nights Trilogy

a Rafflecopter giveaway
Posted by Give Me Books at 12:21 am