Book #1 A Million Miles Away

Molded by tragedy and pushed into emotional independence from a young age, Jasmine Ashcroft thinks she has this whole adulthood thing all figured out. College? Bring it on. Career planning? No problem. Dating? Sure! Well…maybe. After she gets the rest of her life dialed in.

But an unexpected meeting with the musician who created the soundtrack to her life puts those beliefs to the test. Can Jasmine find a safe--and sane--place in his high-stakes, jet-setting world without nuking her future, her family ties, or her heart?

***4 Strange Angels Stars***
“Every life has a measure of sorrow, and sometimes this is what awakens us.” - Steven Tyler

A Million Miles Away (Angel Interceptors #1) is the debut book of Elizabeth Corva and I must applaud her since this book took me by surprise on how much I was consumed with Jonathan and Jasmine’s story. I must warn readers there is a cliffhanger and no HEA. What I think makes this book stand out from other rocker books is that Ms. Corva took time in developing the storyline between Jonathan and Jasmine. She did not rush into a typical storyline of a lead singer falling in love with his die-hard fangirl, Jasmine.  What Ms. Corva did was something else? She allowed readers to “feel” and get a perspective of what a naive shy teenage girl is thinking when it comes to “love” and “crushes.” As an added bonus, the way Ms. Corva described a rockstar lifestyle is as close to “real” that I would think it would be, whether it be from drugs, strippers, groupies, sex, alcohol, money, love and jealousy.
Posters plastered on the bedroom walls, every album and music articles written collected, and of course every song lyrics memorized.. oh yeah, a poster of  your favorite celebrity crush hanging above your headboard…sounds familiar right? Well any diehard fangirl can relate when it comes to their favorite musician or band. You probably knew every tidbit ranging from their favorite food, birthday, and hobbies memorized. As any teenage girl can relate to, when you have a crush on your favorite celebrity, you would dream and fantasize about meeting them. Probably you even imagined him being your boyfriend. Well that was the case for Jasmine Ashcroft when she meets her favorite band, Strange Angels and of course her favorite member, Jonathan “Kit” Fox.  When dreams become reality,  when friendship crosses the line of possible romance, and when age and maturity levels are a major factor, blurred lines are crossed. As with life, sometimes there comes a point when one realizes enough is enough and its best to walk away and to let the music fade out.

Jasmine Ashcroft is 17 years old and loves music, especially when it involves her favorite band Strange Angels. As a die hard fan, she has collected everything her teenage hands can get on.  As with any crushes, she loves the lead singer Jonathan “Kit” Fox.  He is her ultimate crush and dream man. As a graduation gift from her step-father Nate, she got tickets to see their concert. As luck would have it, Nate’s employee Marianne, will be accompanying Jasmine to the concert. With Marianne’s connection to the band, Jasmine was able to score backstage passes. When Marianne was “preoccupied” with one of the other band members, a shy innocent Jasmine is shell shocked when she finds herself alone in a room with Jonathan.
Call it fate, luck, destiny or whatever, Jonathan, 27, seeks out a friendship with  Jasmine and eventually hires her as his personal assistant. Although Jasmine is shy, naive and innocent there was something that drew and attracted him to her.  They found friendship and bonded over their love of music. Though they never crossed any romantic lines, Ms. Corva will have you rooting and wanting them to get together. I know many readers are turned off by the age difference but personally it really didn’t bother me. So readers who feel Jonathan was too old to pursue her, don’t worry, he didn’t. As much as you wanted Jonathan to see and take notice of Jasmine, I thought it wasn’t right at the moment since Jasmine had a lot of growing up to do.

What can I say about Jonathan without causing me to fangirl as well.. I absolutely adored him. He was the perfect balance of sweet, charming and of course a little alpha male. There were times I wanted him to pursue Jasmine but at the same time, I respected his decision that it wasn’t right. I truly felt that he cared deeply for Jasmine and walking away was the best thing for both of them.
Overall, I really enjoyed reading A Million Miles Away. It was a perfect tale of a young woman discovering who she is with a glimpse of rockstar life thrown into the mix.  Although the ending will break and twist your heart, I know its not the end for Jonathan and Jasmine. If luck and fate worked its magic for these two to meet, then I truly believe their fates are meant to cross again in the future.  Jasmine and Jonathan are one of those couples who are meant to be together, and eventually they will find their way back. 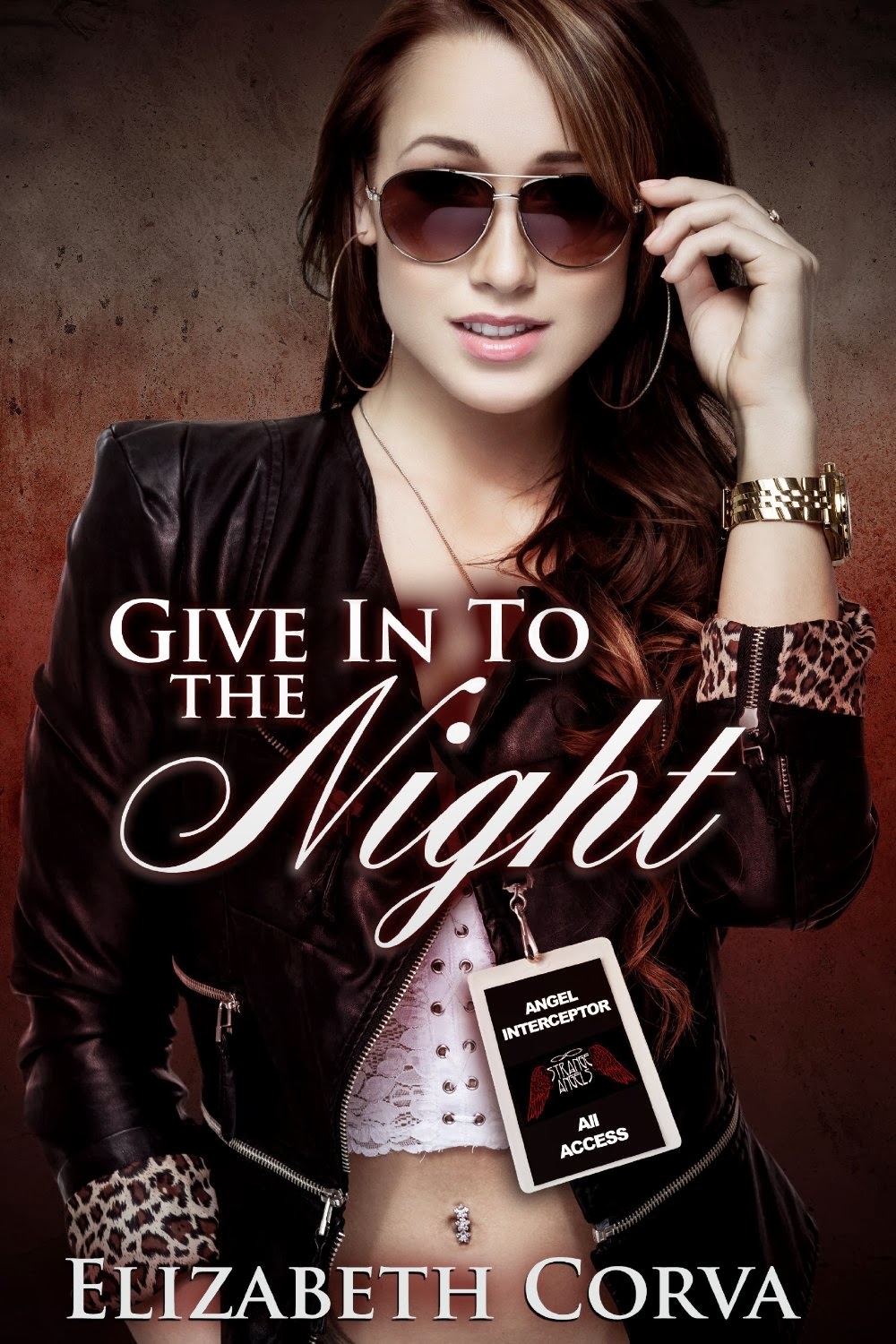 Book #2 Give Into the Night

It’s been three years since Jasmine Ashcroft got her innocent heart skewered by her teenage crush, singer Jonathan Fox. Since then, she’s had plenty of time to grow up. To get over him. To move on. Or so she thinks…

Jonathan Fox has been burned by love. Again. Now he’s ready to jumpstart his career and become the most Eligible Rock Star in Town. Which town? All of them. While he tours the world, he’ll also play the field. Or so he thinks…

Jasmine and Jonathan’s paths are about to cross in an unlikely place. For once, the timing is right: Jasmine wants someone to rock her lonely nights. Jonathan wants someone who can keep up with his wild life. But when regret and unrequited desires collide, the resulting firestorm of emotion might be too much for them to handle. Or so they think…

Give in to the Night by Elizabeth Corva is the second book of the Angel Interceptors series. This book picks off where it last left off in A Million Miles Away where Jonathan and Jasmine are at different points in their lives three years later.  What is meant to be will always find its way. Is that the case for Jonathan and Jasmine?

Jonathan Fox thought his life was all set. Everything he wanted accomplished was done. He had a beautiful famous girlfriend in Rafaela, achieved fame and glory with Strange Angels, money in the bank, worked as a music producer and actor, and had a loyal dog by his side. He even got a tattoo in Irish gaelic that read “Mair gan aiféala,” which translated Live Without Regrets. What was there to regret.. Jonathan had it all or did he?
Jasmine Ashcroft is back after studying abroad in Brazil. The once shy, naïve, innocent girl has now blossomed into a young, beautiful, mature lady. Back in North Carolina and enrolled in graduate school, she thought she could lock and bury those feelings for Jonathan Fox away till fate came knocking on her door again.  As much as she wanted to say those feelings for Jonathan were puppy love or a crush, they were REAL for her.

Life for Jonathan was not what he pictured. His love life was a mess when he caught his girlfriend cheating on him, and he was at a crossroad in his life musically. He missed singing and his band. When an opportunity came about for him to work on a music collaboration with a musician in North Carolina, he least expected to see the girl that he let walk out of his life.  Three years ago, he let Jasmine walk out of his life for reasons of her age and innocence. Now that she’s standing in front of him, Jonathan didn’t want to let this opportunity of fate slip away again.   With “Live without Regrets” tattooed on him, he didn’t want to lose the chance and possibly the woman, who actually knew the real Jonathan “Kit” Stelfox not just the rockstar. The once naïve girl has now blossomed into the perfect woman for him.

“Jonathan belongs to the public,” he quipped. "But Kit belongs only to you.” “Good. Because I don’t like to share...Kit,” she joked back.
When a shocking and tragic event causes Jasmine to seek comfort in the arms of Jonathan, they soon find themselves facing reality that these feelings that they have for each other are REAL and can no longer be denied. Bound together with their history and love of music, the new couple must navigate and balance how their relationship will survive when Jonathan and the Strange Angels are reunited. As Jonathan and the band are traveling more, their relationship must face the biggest tests when paparazzi, long distances, ex lovers, and disagreements stand in their way of HEA.  Will Jonathan’s fame and tours be their downfall? Will Jasmine fade away behind the scenes? Or will Jonathan and Jasmine show the world that their love can survive distance and time?

Overall, I couldn’t get enough of Jonathan and Jasmine. I was beyond thrilled when their paths crossed once again. In the first book, Jonathan let Jasmine walk away for good reasons and now in Give in to the Night, he can finally claim the girl he loves and this time they were both at the right place emotionally and physically. Even though there is still that age difference, readers must realize Jasmine is more mature for her age now. She is no longer the girl with the high school crush but a woman, who knows what she wants and that is Jonathan. No longer worrying about her maturity and age, Jonathan finally found happiness and peace with the woman he wants to call his girlfriend.  As a couple, they are each others yin and yang.  What I truly love about this series is that Ms. Corva didn’t jam pack the relationship of Jonathan and Jasmine in one book but she showed that these characters had to go through what they did in order for them to be where they are as a couple. Jasmine and Jonathan had to experience hurt, disappointments, pain and distance in order for them to come to a full circle as a couple. In the first book, Ms. Corva twisted and broke our hearts and now she was able to tape it back together in Give in to the Night.  Now as a couple, I look forward to reading the next installment of Jonathan and Jasmine.

Book #1 A Million Miles Away

Book #2 Give Into the Night

Elizabeth Corva worked in the music industry for 14 years before moving to the relatively sane and stable world of defense contracting. She has collected a road case full of stories that she uses as inspiration for her novels...with the names changed to protect the innocent and guilty alike.

The Angel Interceptor series was conceived as the sun was setting on Hair Metal, born during the early days of fictionpress, and came of age in 2013 when the author finally worked up the nerve to try self-publishing. All of Elizabeth's works are dedicated to the men who play Metal and the women who love them, even though they should know better.

WEBSITE
GOODREADS
Posted by Give Me Books at 12:14 am

Email ThisBlogThis!Share to TwitterShare to FacebookShare to Pinterest
Labels: 1 Feb 2014, 4 1/2 stars, 4 stars, A Million Miles Away, Elizabeth Corva, Give Into the Night, Michelle, Review, The Angel Interceptor Series