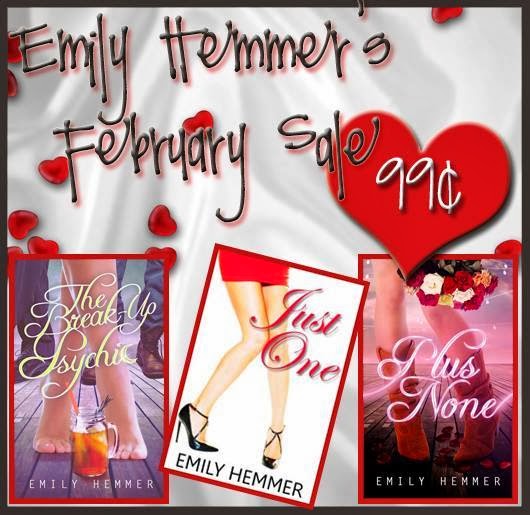 Sweetheart of A Giveaway

All Emily Hemmer books will be available for 99c the entire month of February, for all retailers! She’ll also be hosting a weekly giveaway on her Facebook page for everyone helping to spread the word. ♥ This is the only time this year all three of her books will be priced at 99c!!

The remaining prizes for February Include:

Week Four: Emily Will Write An All New Scene Featuring The Characters of Your Choice – Just For You! (not to be published anywhere else)

WHAT REVIEWERS ARE SAYING ABOUT THE DANGEROUSLY DIMPLED SERIES 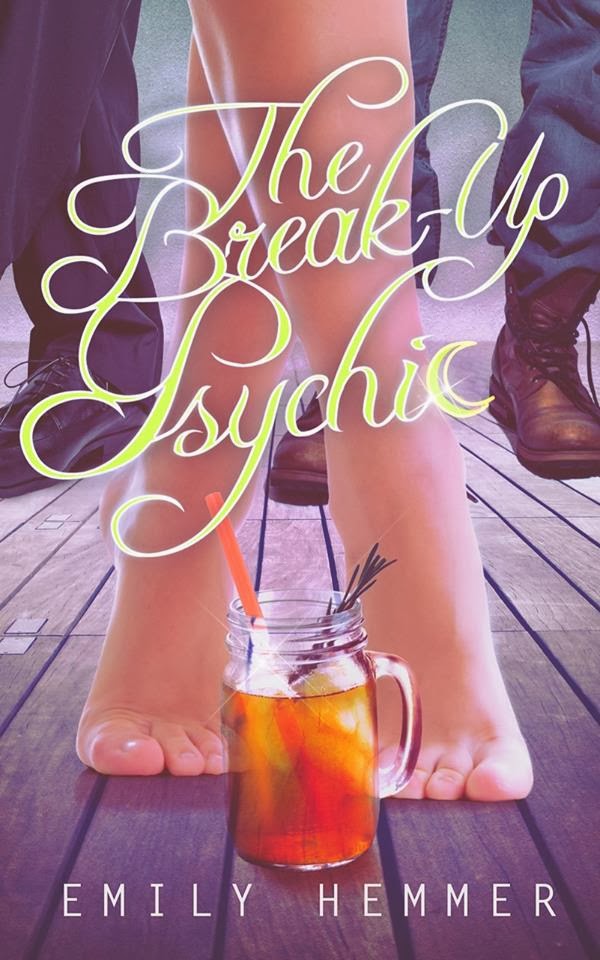 Ellie has a bad habit of picking the wrong man; a cheating ex-boyfriend, a mild-mannered foot fetishist, and let’s not forget about the hillbilly with the impolite hard-on. But when Sam James, the oh-so-hot bad boy Ellie has sworn to stay away from, keeps turning up like a bad penny, she’s going to need more than her psychic senses to see what’s coming her way.
ADD TO GOODREADS 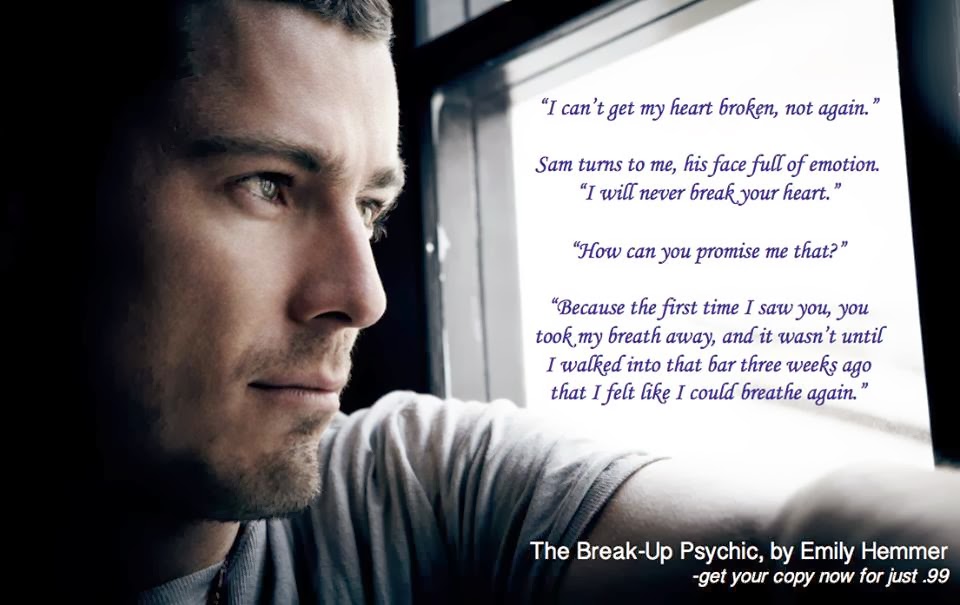 There are times when I’m in the mood for a debut novel - something not yet vetted, not tried and true, not filling up my newsfeed for weeks before its release.  I realize debuts are not the favorites of some. I understand that completely. It’s a craps shoot and often times you end up losing your metaphoric ass (or a couple of hours) and disappointed. But SOMEtimes you find a winner and it makes it all worth it… all the crappy ones that you’ve had to stumble over just to find a gem. That’s what The Break-Up Psychic was for me and I very much enjoyed it.
Ellie is witty and funny and deserves SO much better than Tim (the asshat). So when Sam, in all his sexiness, catches Ellie’s eye, well, I was stoked.  Because of her inner “psychic warning” system, Ellie is cautious and gun-shy. Ellie hears warning bells every time she’s around a guy who will hand her a broken heart. I likened it to a romantic version of a bullshit meter, only with bells.

Luck for Ellie she’s not alone. With a best friend like Luanne, a boss like Brook, and an insightful old coot named Hart, Ellie is bound to end up being pushed towards the right man or just away from the wrong one.
I laughed out loud (quite literally) while reading this book and can’t wait to read the next Emily Hemmer novel.
4 very solid stars
~ Review by Jennifer
#1.5 Just One 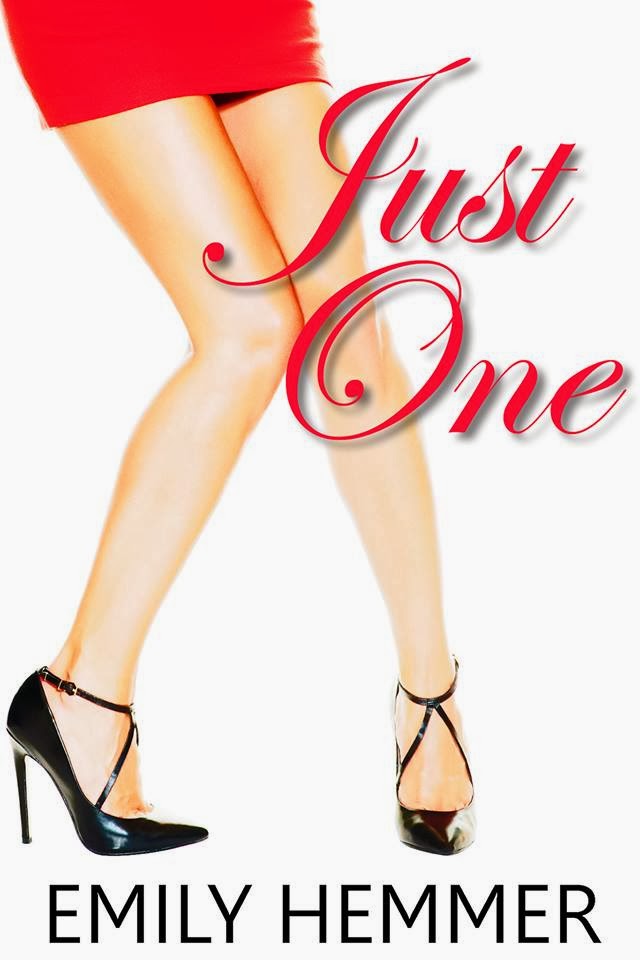 Limping her way through a high society birthday bash, Charlie would like nothing more than to trade in her high heels for a pair of old cowboy boots. But when she finds herself tail over tits in the hydrangea, and Alex Ramirez appears to lend a helping hand, four-inch stilettos seem like the least of her worries. What's a country girl to do when her knight in shining armor turns out to be a rich boy with a mysterious agenda, and a pair of panty-dropping dimples? Two star-crossed lovers, one night, and a really naughty leather belt. Maybe Charlie should get out of Harlow County more often… This is a novelette length work (4 chapters/14K words, approx), and is the prequel to book 2 in the Dangerously Dimpled series, Plus None.
ADD TO GOODREADS 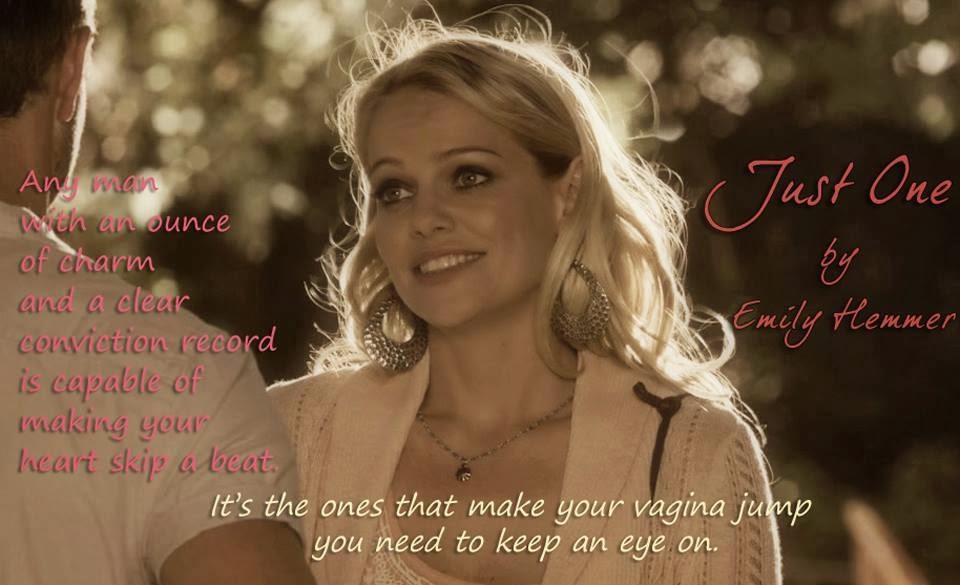 I’m a full length novel kinda girl, so rarely does a novella do it for me. I like developed characters, enough background to make me feel like I understand the story, and the bits and pieces that are sometimes left out of shorter stories. With Just One, the characters and plot didn’t make me feel like I was reading a rushed story… it had everything I wanted and, of course, left me wanting more.

Charlie was making me laugh as she was getting herself out of awkward situations and into naked ones. I could see myself falling into the bushes at a party and only hope that I would make it out with the grace she had. I doubt I could do it if confronted with Alex Ramirez… I’d be lucky to keep myself from licking him. And THAT wouldn’t be awkward at all!

The story has a sweet Southern flare that I found very endearing and quite funny. Aside from all the giggles, the sex was crazy hot!! I wanted more as soon as I read the last word and was thankful that Plus None was right there waiting for me.

Four stars
~ Review by Jennifer
#2 Plus None 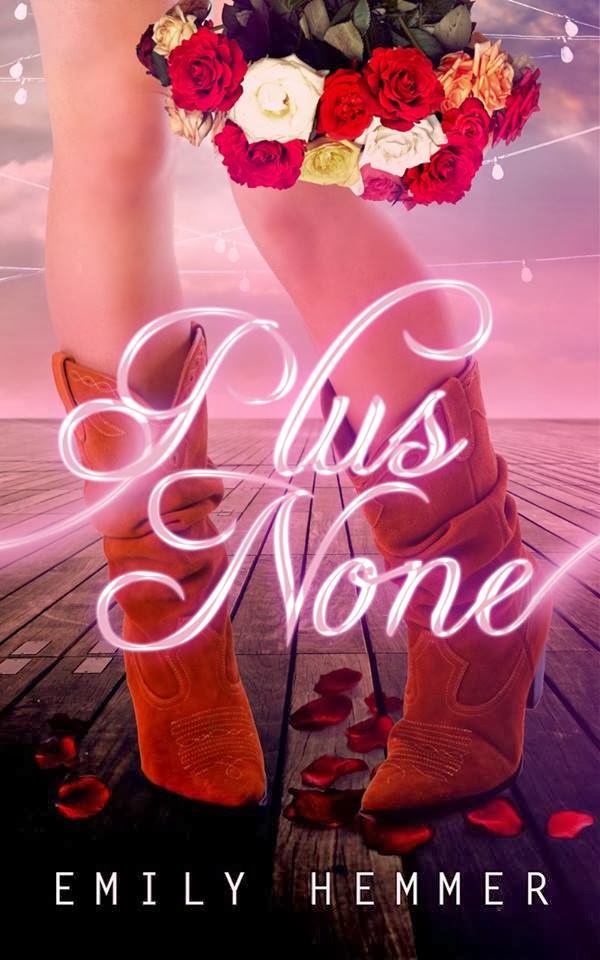 Keeping her loud, redneck family in line for seventeen years has been no easy feat for Charlie Davies, but she’s managed to carve out a life for herself in the quiet crazy of her hometown. That is, until her baby sister announces she’s marrying a country-club boy from the bright lights of Dallas. Charlie’s got two months to defeat her sister’s she-demon Maid of Honor, keep her cousins from ruining the nuptials, and decide whether her one-time, one-night stand Alex Ramirez is worth a second chance.

Alex has thought of almost nothing but Charlie for two years, since the morning he woke up alone in her empty hotel room. Her sister’s upcoming wedding to his best friend seems like the perfect opportunity to reconnect with the girl who got away, but he underestimates her pull on him and soon finds himself torn between love and duty. With the wedding fast approaching, Alex and Charlie’s relationship will be put to the test. Hillbillies, debutantes, and the old southern divide of rich and poor threaten to keep them apart. One thing’s for sure, it’s about to get interesting in Harlow County.
ADD TO GOODREADS 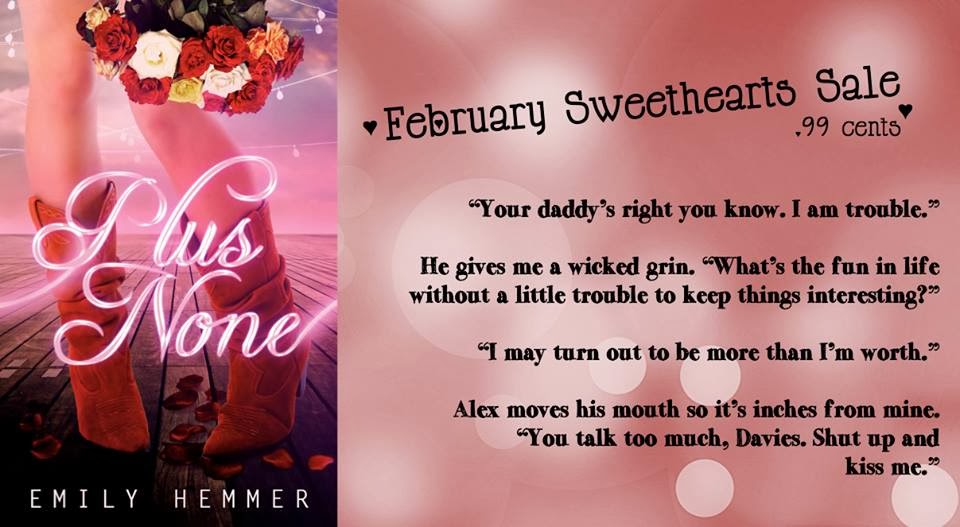 Seconds after finishing Just One, the prequel to this book, I jumped straight in to this one. I wanted more Charlie and Alex and Plus None did not disappoint.

I loved loved loved Charlie even more than an hour before when I was reading the prequel. I kind of want to be best friends with her. She’s a quick-witted smartass that doesn’t take crap off of anyone. There wasn’t a second of this story that I didn’t love her character. I can see why Alex is so smitten with her… and he’s so friggin sexy. He’s not just Calvin-Klein-underwear-model-hot, he’s also funny, smart, romantic, and loyal. It makes my heart happy that he found Charlie in his upper-class, country club world so she can show him what true love and happiness feel like… even if it does seem like the deck is stacked against them.

If Charlie and Alex were the only two characters in this story, it would be good, but adding all the secondary characters makes this novel great. Charlie’s Aunts and extended redneck family make me want to live in a trailer park. Okay, maybe I don’t love them that much. The trailer park in my town scares me a little.

This book, for me, was two sides of a coin – both laugh-out-loud funny and emotionally sexy. There’s no other way to describe it… it gave me sweet butterflies one minute and seconds later had me muttering “damn” as the sex was just that hot. Charlie and Alex have that soul-mate chemistry that makes you a cheerleader for them the entire book.

I started Just One in the late evening, thinking I’d read it before I went to bed. That wasn’t even an option. I was up until the dawn’s early light started peeking in my window finishing up Plus None. Thanks to Ms. Hemmer, I missed an entire night’s sleep and it was so VERY worth it! I can’t wait for more books from this author as they just keep getting better and better! 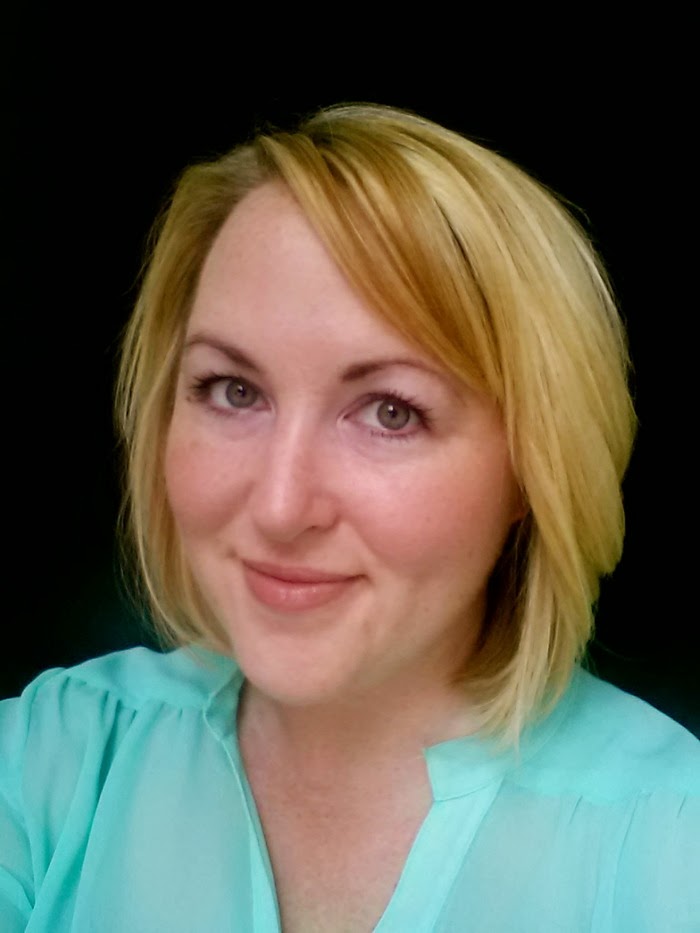 Emily Hemmer was raised in the Northwest suburbs of Chicago before settling in Kansas City in 1996. She was raised in a house full of women and can therefore shower, blow-dry her hair, and apply full makeup in twenty minutes flat. A huge fan of romantic comedies, Emily was overjoyed to learn that her college roommate could recite every word of the movie ‘Clueless,’ until she realized that was the only VHS tape her roommate owned. Emily dropped out of college and to this day, blames the listless years of her twenties on the words, “As if!” She completed her degree after an extended eleven-year semester break.

Married in 1998, Emily and her husband ‘Mr. T’ have two beautiful children now entering their teenage years. Her mother assures her that these years are not meant as punishment for parents, but as a source of great hilarity and recompense for grandparents. A sweet yellow lab, a jerk-face Viszla puppy, and an evil Siamese cat make up the rest of the family.

In October 2012, Emily learned she came in 2nd place for the SFARWA ‘s Heart-to-Heart contest (for contemporary single title romance) for her first work, The Break-Up Psychic. This work has been a true labor of love and is the basis for all of Emily’s future happiness. But she’s trying not to put too much pressure on herself.

According to her Yahoo! Shine horoscope for 2013, this year looks to be the best of Emily’s life. She has plans to publish three books, win countless accolades from her peers, and literally roll around on a bed made of money. She also plans to purchase a new dishwasher.