Cover Reveal - Because of the Dark by Danah Logan 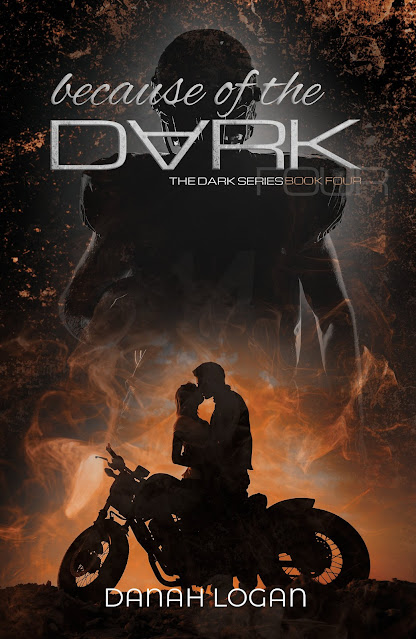 The dark didn't end with the light. He lost his future. She fights to survive. More secrets, more betrayal, and a love that was meant to fail before it even began.
My name is Weston, but my friends call me Wes.
Though, I don't have many left.
Two years ago, I lost my dream. My future.
My best friend's sister stumbled across a secret she had no idea existed—her secret.
Friendships were betrayed. Unexpected alliances were formed.
My loyalty was tested, but I blindly stood by their side.
What I didn't realize was that following them into the dark would cost me everything. My friends. My scholarship.
I was driven by anger and resentment toward the people I had once trusted with my life.
Until I met her: King.
My name is Kingsley Monroe.
At least, that's the name I go by these days.
I didn't plan this. I wasn't supposed to stay. Keep moving, he ordered. Then, one fateful afternoon changed the course of my future. I ran into him: Weston Sheats—literally.
I stayed in the shadows for over a year. Eventually, my need for him to notice me made me step out of the dark. I wanted him to see me once. I swore I wouldn't let him get close, I would not get attached. I failed.
I fell—hard.
An unexpected turn of events was the wake-up call I needed. I had to tell him, come clean. But would he accept my past? Who I am, and what I did?
Realizing there was no future, I did what I was supposed to do months ago…and I took the one thing with me that could've made a difference for both of us.
** Author's note:
Because of the Dark (BOTD) is the fourth book in The Dark Series.
While BOTD features Wes's story and is considered an INTERCONNECTED standalone, this book builds on the events in the previous three books. It is highly recommended to read the entire series to get the full experience.
Please be aware that if read as an interconnected standalone (prior to the previous books in the series), BOTD will contain SPOILERS about the plot in the other books.
Wes's story within The Dark Series is set two years after the last chapter in Of Light and Dark (Book Three).
This series is intended for MATURE (18+) readers. BOTD is a dark, new adult, contemporary, suspense romance. It is labeled dark due to the themes that may be considered TRIGGERS for some. Reader discretion is advised. 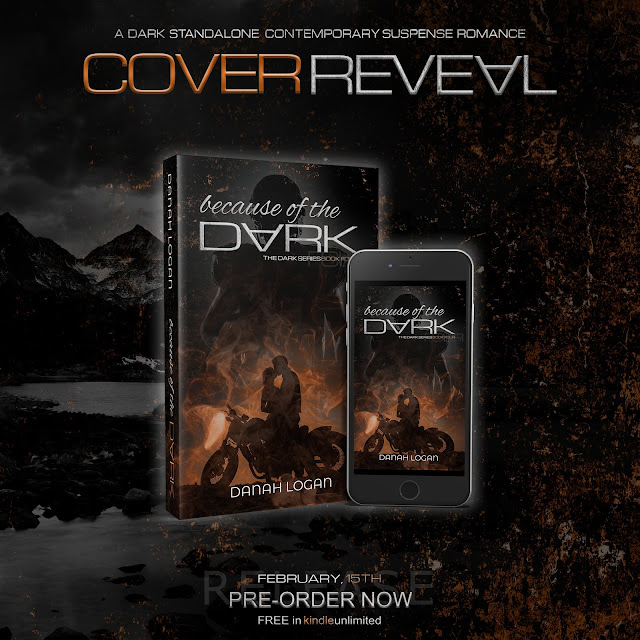 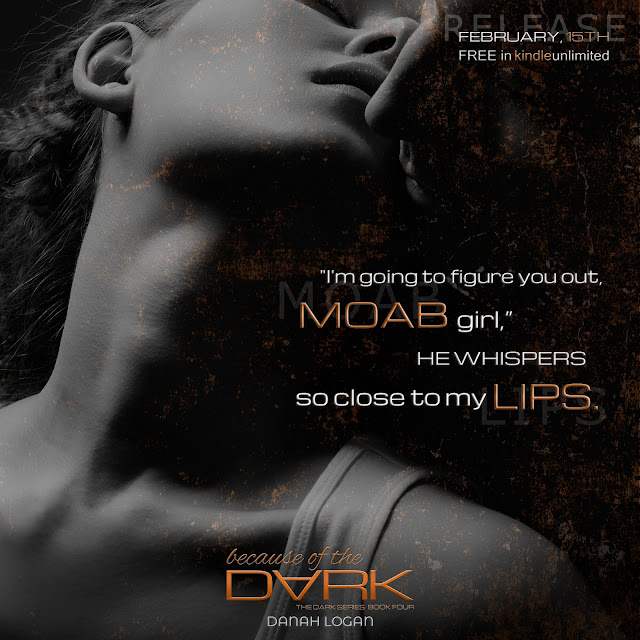 PLAYLIST
EXCERPT
PROLOGUE
WES
My Harley Street Bob vibrates under me as I wait for the light to turn. I'm still in disbelief about how Kai finished the entire bottle of Patrón and was still standing upright when I walked through the door of our shared townhouse. The guy has a capacity for liquor I've never seen before and is still fully functional. But of course, I'm stuck replacing it once we run out. Allowing him behind the wheel of his Rover—functioning or not—is not something I can do with a good conscience. Thankfully, this task has become easier since June, when I turned twenty-one, and I no longer have to rely on a fake ID or bribes.
The red finally switches to green, and I'm moving again. Two more blocks until The Moose's Head. After almost twenty-four long-ass (and most of them cold as fuck) months, I'm still dumbstruck by the names of bars, restaurants, or local shops. You'd think just because we're in the Treasure State, surrounded by mountains and wildlife, we'd still have something like Whole Foods or Binney's. No, we have The Farmer and The Moose's Head—TMH for the locals.
Turning off the ignition in front of the liquor store, I take in the decked-out Jeep MOAB next to me. The car screams badass. Matte black, five-percent tint all-around black rims, light bar, chrome tube steps—that's what I call a sweet ride.
I take a step toward the double doors when a familiar ping sounds in my wireless headphones.
"Message from Rhys McGuire."
Fuck me. As if my day isn't already bad enough.
"Wes, bro, you can't avoid us forever. It's been two years. We know you got the invitation. Calla misses you. Call us," the robotic female voice reads me the text from my former best friend.
You bet your rich ass I can keep avoiding you.
They're the reason my life turned into this dumpster fire. I don't bother pulling out my phone. Seeing the words will only result in me sending it flying, and I can't afford a new one. Instead, I walk into The Moose's Head and veer toward the aisle with the hard stuff.
After this, I really need to replenish our stash. Thank fuck I brought the hiking backpack. That way, I can load up triple time.
Getting everything I need, I add a pack of Big League Chew to my liquid purchase—never heard of that shit until arriving in Podunk, Montana, but it's addicting, and now I buy it whenever I come here.
I head back to my bike, bottles clinking together on my back despite the layers of paper bags I ordered the flannel-clad clerk to wrap around them. My gaze sweeps over the Jeep. After the text, I forgot all about it.
I wonder who owns this baby.
I'm standing at the light right off of TMH's parking lot, waiting for it to turn, when I see the Jeep pull out of its spot in my side mirror.
Weird. I didn't notice anyone leaving the store behind me.
"Radioactive" by Bullet For My Valentine blares through my headphones as I drive down 19th to our house on the south side, near the university. I approach another intersection just as it turns red, and I slow the bike down. Almost stopped, I glance in the mirror and spot the Jeep speeding toward me.
What the—?
I'm about to abandon my Harley to save my ass when the driver hits the brakes and brings the car to a standstill about a foot from my rear tire, leaving skid marks on the asphalt.
Adrenaline is pulsating through my body, and my hands tighten around the handlebar. This dude is asking for it. Still riled up from the text, I wouldn't mind planting my fist in someone's face. I'm about to get off my bike to march toward the MOAB when the light switches and the jerk beeps at me.
Lucky motherfucker.
I've never been a hothead. Rhys used to be the one who tended to lose his temper in our friendship. Not that I was a pussy; I simply didn't have the desire to pick a fight. I was the jokester—the person no one took seriously—until everything was ripped from under me. The day I punched my best friend across the face…that was when I changed.
The Jeep drives behind me with less than the mandated safety distance, and I clench my jaw.
Give me a reason, fuckface.
I switch lanes as I approach Bear Court, where I have to turn left—yup, even the streets have ridiculous names here. The dick navigating the Jeep follows suit and comes even closer. Fast.
At the last moment, the Jeep moves back into the right lane and halts next to me. The light turns green, but neither of us moves. I glower at the blacked-out driver's side through my visor—equally tinted—when the window suddenly lowers about halfway. My heart stutters when a girl with wavy, dark-blonde hair comes into view. Wayfarers cover half of her face that's visible, and despite not seeing her eyes, I can feel her gaze on me. Somehow, I know that she is stunningly beautiful. My body is instantly buzzing with...recognition?
Have I seen her before?
I hold my breath as something in her expression changes. She is smirking. The crinkle around her eyes is noticeable, even though most of her face is hidden from me. Lifting a hand, MOAB Girl salutes and takes off with screeching tires.
Stunned, I remain at the intersection until I can no longer see her lights down the road.
I have no idea what just happened, but the thudding beat of my heart tells me that it was the most exciting thing since exiting the plane two years ago. 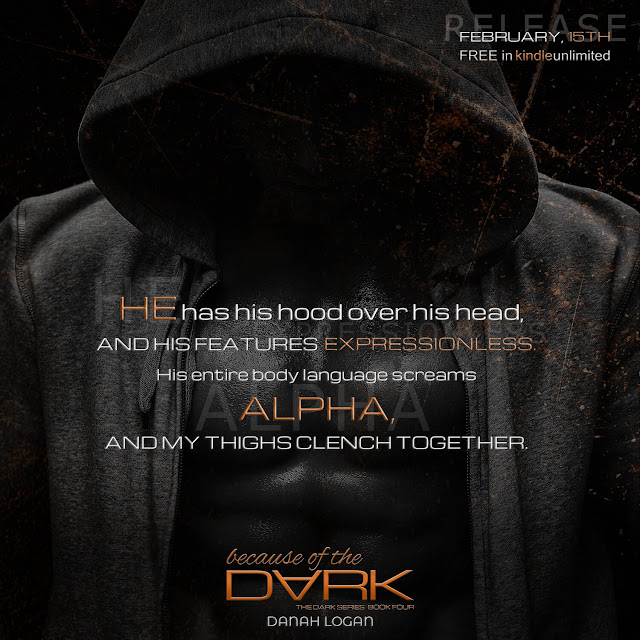 EARLY REVIEW
OMG - ALL THE YES!! This book had every single thing I needed in my life right now. I haven’t read anything written by Danah Logan before but I will definitely be picking up the rest of her books ASAP. Because Of The Dark is book four in her Dark series but can 100% be read as a stand alone too. Going in pretty blindly and not knowing any backstory for these characters didn’t make this hard to follow and I was easily pulled into the story. If anything it has me even more intrigued to circle back and read the first three books! I loved the spark between Wes and K. Unraveling their love story was something that will give you all the feelings. Something that I absolutely am over the moon in love with is when the author makes you fall in love with secondary characters and Logan did a phenomenal job of giving life to so many of them in this book (cannot wait for more Marcus 🔥🙌🏻). SO MANY of them I just want more from so I am crossing all my fingers that we are far from done in this world of hers. After just reading one book by Danah Logan it’s safe to say she is now an author on my must read list! - @jennsbookvibes on IG 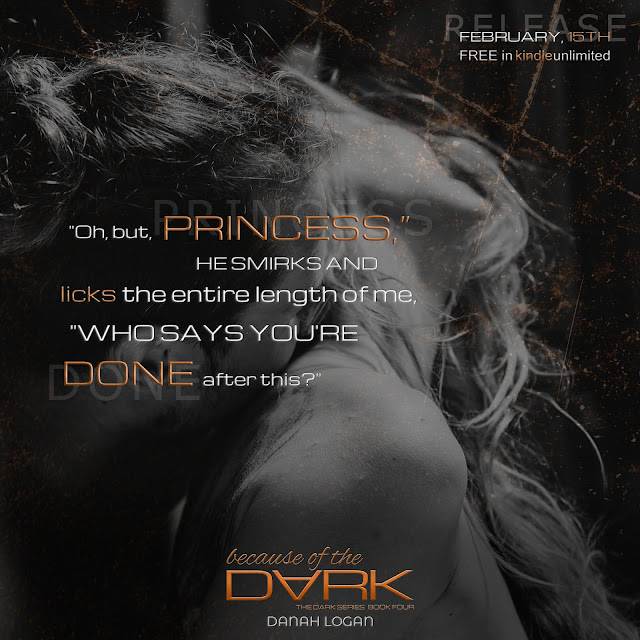 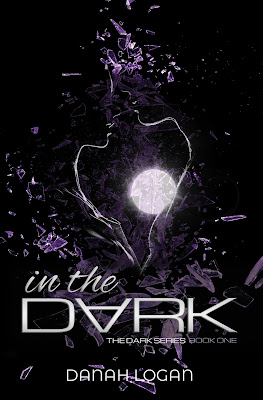 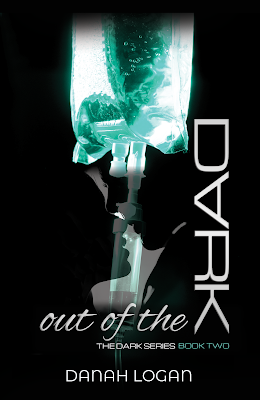 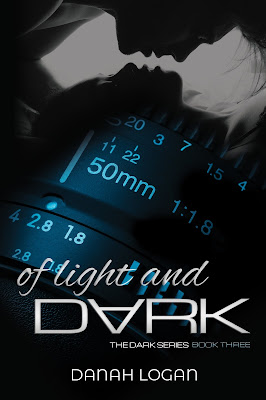 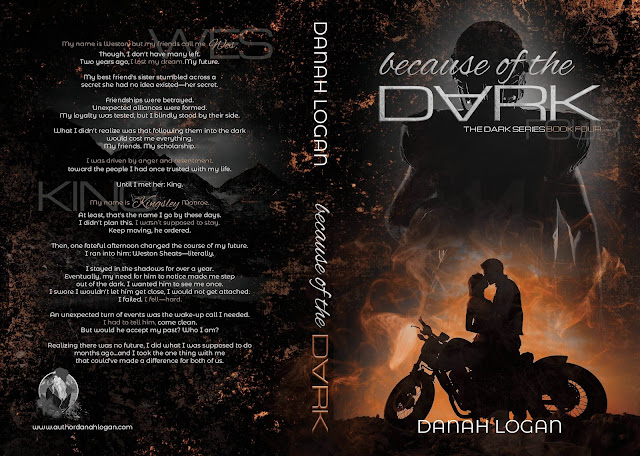 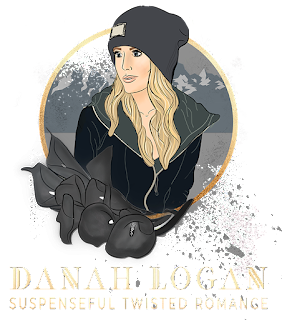 Born and raised in Germany, Danah moved to the U.S. and eventually traded downtown Chicago’s city life for the northern Rockies.
From a young age, she has always had “voices” in her head. She wrote short stories in high school; however, she eventually stopped as life got busier.
Talking about said “voices,” one day, a friend suggested giving it another try--even if it was just for the fun of it. Until that point, her focus was on raising her two-year-old twins, and she had never thought about writing again. But, she dug through old backup CDs (yes, people still have those) and found the original version of one of her short stories.
About forty thousand words in, she realized there is no way to tell it in just one book, and that’s when her first book series was born.
With many more plots in her head, this writing gig has become Danah’s passion, and she spends every free minute in front of her laptop, letting the voices out.
AUTHOR LINKS
FACEBOOK
FACEBOOK GROUP
INSTAGRAM
PINTEREST
GOODREADS
AMAZON
SPOTIFY
WEBSITE
TIKTOK
VERVE ROMANCE
GIVEAWAY
a Rafflecopter giveaway
Posted by Give Me Books at 11:00 pm