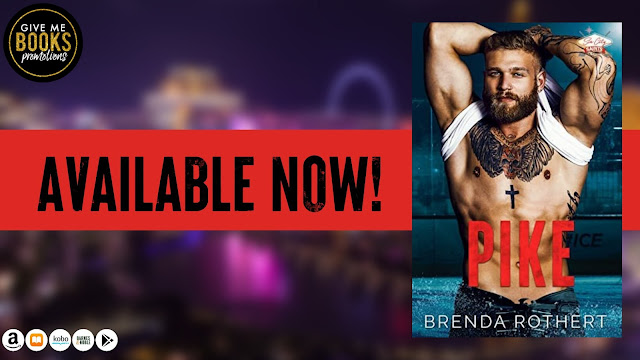 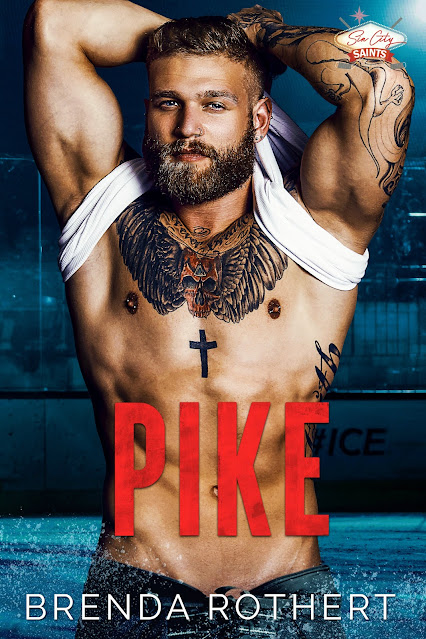 Title: Pike
Series: Sin City Saints #2
Author: Brenda Rothert
Genre: Hockey Romance
Release Date: January 18, 2022
BLURB
In Sin City, the stakes are high. Bet big and you may win it all—but you could also lose far more than you bargained for.
Indie Garrison is in over her head. Ditched by her husband in the dead of the night, she’s suddenly a broke single mom living with her sister. Sure, she and pro hockey player Pike Morgan got off on the wrong foot in a big way, and admittedly, it was entirely her fault. But Indie’s been fooled by a man for the last time, and no matter how hard Pike tries to break down her walls, she’s not falling for him. At least, that’s what she keeps telling herself.
Pike Morgan is at the top of his game. Being drafted by the new Las Vegas expansion team was ideal for the bearded, blue-eyed NHL goalie who’s only serious about two things: hockey and partying. When he accepts a bet from a teammate, he finds himself wooing a spirited woman who wants nothing to do with him. Once he gets to know her and her young son, though, he regrets his wager. If Indie finds out the truth, she’s going to hate the player and the game.
ADD TO GOODREADS 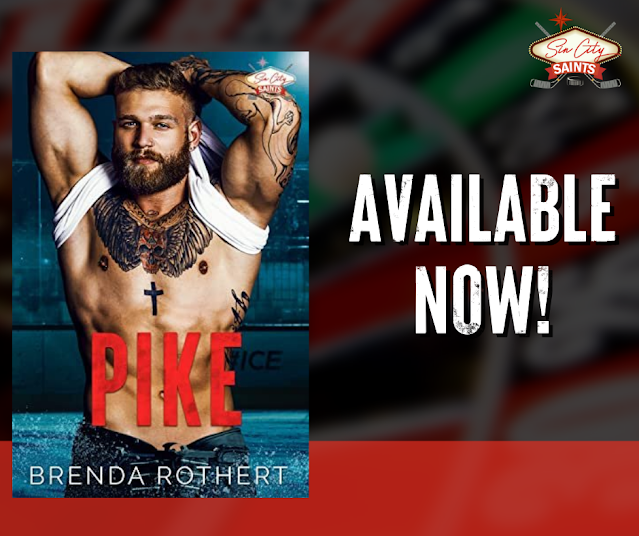 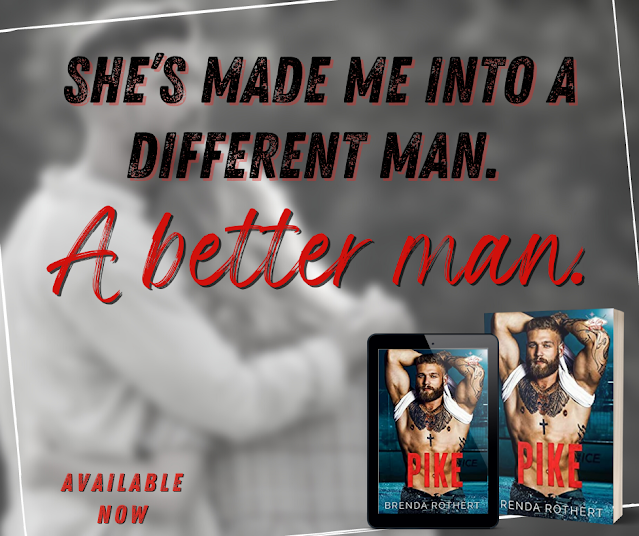 EXCERPT
“What do you think of the new blocker?” Katz asks me.
We’ve just finished up practice but we’re still on the ice. I smile as I watch Rudy getting hit with rapid-fire pucks. He’s a good guy who dreamed of playing pro hockey but didn’t make it, so he became a trainer instead. His name’s actually John, but we call him Rudy because of his enthusiasm for being the best practice goalie ever.
“It’s okay,” I say, taking off the blocker I’m wearing. It’s a new model Katz asked me to try out in practice.
“You’re not ready to wear it in games yet,” Katz says.
“No way. Me and my blocker are like Smeagol and his ring.”
Katz grins. “I never would have pegged you as a Lord of the Rings fan.”
“Are you kidding? I love that shit. The movies, I mean. It would take me years to get through the books, and I’m not much of a reader.”
“Morgan!” Our head coach, Phil Bear, calls out to me while pointing at someone standing next to him. “This intern needs to see you. Get your ass over there!”
Coach never bothers to learn the names of any of the front office interns. I look over, squinting to make out the face Coach is talking about. I think his name is Shawn, but I’m not confident enough to call him that out loud. I nod in response to him and set my blocker, catcher, and mask on the bench before skating over to the intern at the end of the rink.
I think I talked to Shawn once, and he seemed like a good guy. He’s a college student from what I remember. My gaze immediately shifts to the woman next to him, who is smoking hot. She’s petite, with glossy black hair that falls just to her shoulders in a straight line, beautiful light brown skin, and warm brown eyes. Unfortunately, though, she’s glaring at me.
“What can I do for you?” I ask.
“Sorry to interrupt practice,” Shawn says. “This woman says—”
The exotic hottie cuts him off. “You’re Pike Morgan?”
I grin. “The one and only.”
“You bought a baseball from Vegas Sports Collectors.”
“Yeah?”
“The Roger Maris one?”
“Right.”
What’s this about? I furrow my brow, wondering what this woman has to do with the baseball I just added to my collection.
“I’m the seller,” she says. “They brokered it for a commission. And when my sister gave it to the guy from Vegas Sports Collectors, she didn’t realize I had put my grandmother’s ring inside the case. Can I please have the ring back?”
“There was no ring inside that case.”
Her nostrils flare slightly. I’d find it cute if she wasn’t so pissed off at me for no reason.
“I distinctly remember putting it in the Roger Maris baseball case a few weeks ago. It’s not valuable. I mean, it’s not monetarily valuable, but it holds a lot of sentimental value for me. It was my grandma’s, and it’s all I have left of her.” Tears shine in her eyes. “Can I please have it back?”
“I’d give it to you if I had it, but I don’t.”
“I know it was in there.”
I shake my head. “I already took the ball out of the case it was in and put it in a new one. There was nothing but the ball in that case.”
“That’s impossible! The case has a latch, so there’s no way it opened and fell out on accident.”
I shrug.
“Look, you must make good money, so what’s a little sapphire ring to you?”
“Listen—what’s your name?”
“Indie Garrison.”
“Listen, Indie Garrison—I don’t have it, okay?”
She buries her face in her hands, and the picture tugs on my heartstrings because it looks like she’s crying, but it only lasts a nanosecond. Because when she lifts her face to look at me, the only expression I see if complete and utter fury.
“I’m willing to buy it,” she says in a level tone.
This chick is about half crazy. She’s right—why would I give a shit about someone’s sapphire ring? I wouldn’t care if it was a giant diamond ring. If it wasn’t mine, I’d return it.
If I had it.
“I can’t sell you something I don’t have.”
“So what, it just disappeared into thin air?”
“I have no idea. I paid for the ball and picked it up yesterday, then took it out of the case and put it in my display case. You’re welcome to have the original case back, but it’s empty.”
“Okay…” Shawn tactfully clears his throat and gives me an apologetic look. “You asked me to see Mr. Morgan and you’ve done that, so…”
Indie gives him a withering glare. She may be small, but damn, this woman has some fire. 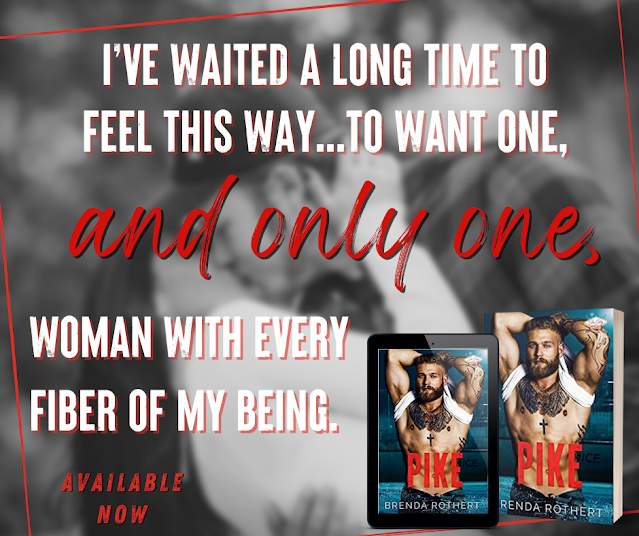 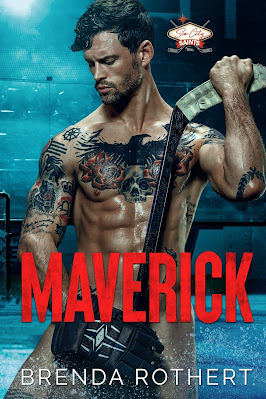 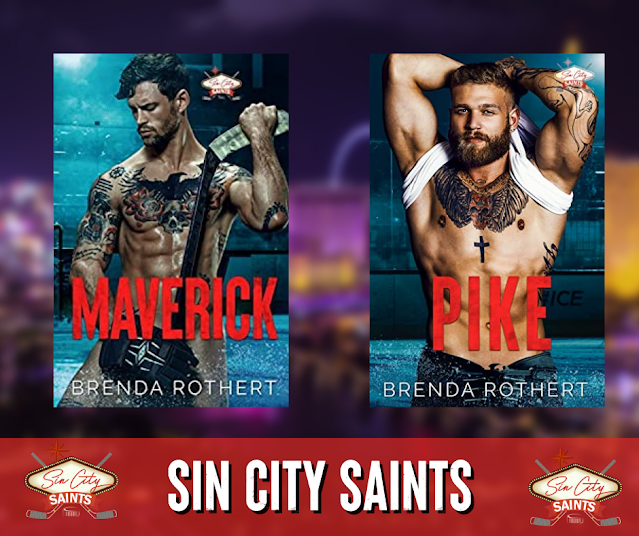 AUTHOR BIO
Brenda Rothert is an Illinois native who was a print journalist for nine years. She made the jump from fact to fiction in 2013 and never looked back. From new adult to steamy contemporary romance, Brenda creates fresh characters in every story she tells. She’s a lover of Diet Coke, lazy weekends and happily ever afters.
AUTHOR LINKS
WEBSITE
GOODREADS
AMAZON
BOOKBUB
NEWSLETTER 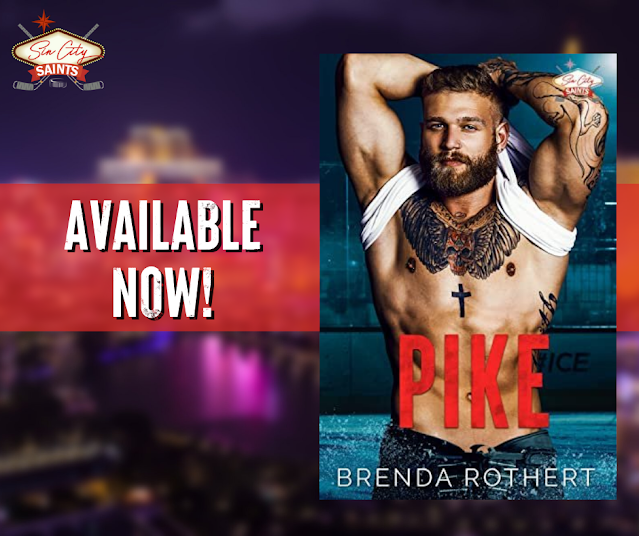