Review - The Con by Justine Elvira 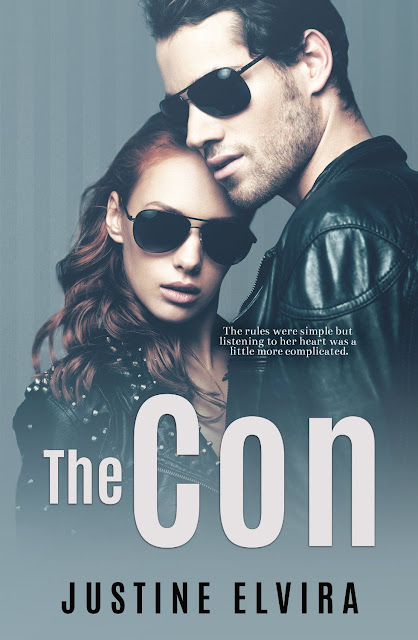 Jagger had three rules for every con:

I broke them all.

I first met Jagger when I was just nine years old. He was an older boy who gave me twenty dollars to buy a new pair of ballet shoes after I dropped mine in the mud. That's when I fell in love with him.

And love would be my downfall.

I would run into Jagger over the years and I'd watch him as he'd hustle strangers out of their money with his latest scam. He lied, he cheated, and he took advantage of anyone he could. Most importantly, he never got caught.

Well, until he needed me to help him pull off his biggest con to date.

I thought I could do it. He told me it was easy to make money through deception, and I believed him because he had a lot of it.

But I should have known that nothing is guaranteed.

My name is Ronnie and now we're on the run. 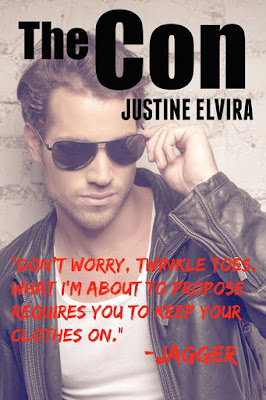 I fucking LOVED this book! It has so many of my favorite things all rolled into one amazing package!

Ronnie's been in love with Jagger since she was a child. I loved seeing her grow and change as the years passed. Jagger may not be a traditional good guy, but he's definitely a good guy. Even living on the other side of the law, he takes care of what's his, and does his best to make a better life for those he loves. His early interactions with Ronnie had me swooning, even as my heart broke for her. It was painfully obvious that he loved her, even if he acted like an oblivious ass half the time.

When things pick up and the suspense hits, it just felt so right that they were in it together. My only complaint is that there wasn't more to their story! I haven't been so disappointed to get to the end of a book in ages. I was pleased with a happily ever after though. It's nice occasionally to know what happens and see loving people get what they deserve.
~ Review by George

I really enjoyed this story. It was full of angst, drama, and lots of sexual tension.

“Wishing and hoping is a dangerous thing.”

Ronnie lives in a trailer park. She is pretty much raising herself as her older sister, Pearl, works full time to support them. Her only escape is dance. After a broken ankle, her life is empty. She doesn’t know what to do or where to go.

Jagger is a con artist. He has been most of his life since he also lives in the trailer park. After his mother died and his dad becomes a drunk, he had to take care of his sister and nephew. Running cons was his way to bring in money.

“Jagger just has something that’s always drawn me to him and made him completely irresistible to me.”

Ronnie and Jagger have a connection – it started when they were young. I absolutely loved how this story went from their childhood until the present so that we could really see the connection between the two. It took a lot to bring the two together, but I loved that this story showed how love can come out of any circumstances. I also loved the Brandon Boner cameo.

I do wish there was a bit more to the ending or epilogue – it felt kind of abrupt. Overall, though, it was a good story that I thoroughly enjoyed and look forward to more from Ms. Elvira.
~ Review by Tiffany

Justine Elvira is a best selling author at multiple retailers. She is also a mother and the Queen of Procrastination. Writing is her form of therapy and helps her escape reality for a little while.

When she's not writing you can usually find her with her kids, or escaping in a good book.