Review - Playing For Her Heart by Megan Erickson 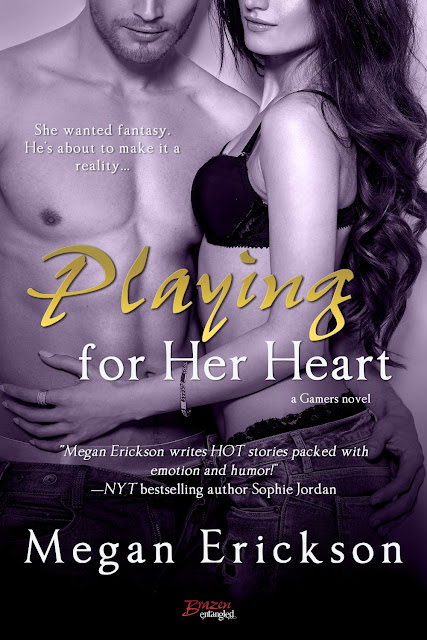 She wanted fantasy. He's about to make it a reality...

Grant Osprey just had the hottest sex of his life. Sure, they were both in costume, and yes, it was anonymous, but he never expected her to bolt in the middle of the night without so much as a good bye, let alone exchanging numbers. Or names. All he's left with are her panties and some seriously X-rated memories...until he meets his business partner's little sister.

Only Chloe Talley isn't the bold, sexy vixen he remembers. And she wants nothing to do with him.

Cosplay is Chloe's only chance to leave her boring, socially awkward world behind. To forget that she's failing at life and can't be with anyone, let alone a single-father like Grant. But the raw hunger between them is undeniable. With him, she can be a misbehaving maid. A sexy call girl for hire. Each scene pushes Chloe beyond her strict boundaries, until Grant demands the one character she can't play. 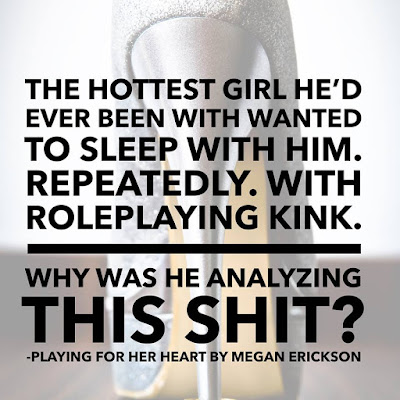 Chloe Talley uses cosplay as a shield. Hiding her true self behind her character, she’s able to step away from the dorky, awkward, broken girl she normally is, and indulge in a little…fun. Which she does with a handsome stranger, right before fleeing in the middle of the night.

Grant Osprey definitely enjoyed the nameless little vixen that rocked his world and left her knickers in his hotel room, but he never expected to see her again. Certainly not at a business lunch with his best friend. Who introduces her at his little sister…

Chloe is nothing like the sexy, confident character he remembered from their hot night when they meet again, and each new encounter with her hiding behind her costumes brings him closer to falling and her closer to revealing her true self to him. Can he convince her that he wants what’s underneath the fancy dress, or will this only ever be a game?

There’s really not a lot for me to say about this book, aside from the fact that I loved it. It was hot. So, so hot. It was funny. It was charming and sweet and just emotional enough that I was on the edge, but not, you know, bawling like a baby. I loved Grant and Chloe. They were so right together, and whoa, their role-playing was electric! But it’s more than that though. They got each other, even when they were playing. And, reading between the lines, it was easy to see the emotional connection being forged in the midst of All. That. Sex.

It was really great to get to see a little bit from Austin and Marley from book one, and to get a closer look at Ethan, who I am hoping gets his (much needed) HEA sooner rather than later. His connection with his sister, his friendship with Grant, even his relationship with Grant’s daughter all made me fall a little for the scarred, broken Ethan, and just made this book better. Secondary character crush alert! I would be lying if I said I wasn’t pissed off on his behalf about the things happening in his life, and I so want to see someone come along and turn it all around for him. (Maybe me?! *crosses fingers*) I am such a sucker for a good redeeming romance!

I am also a sucker for a best friend’s sister romance, which Playing For Her Heart was. It wasn’t a major plot device, but there was enough of that ‘forbidden’ aspect, and some truly engaging banter/discussion/skirting of the issue happening to keep me happy on that front.

This book was, at its base, a well-written, enjoyable, quick, dirty and fucking awesome book. I can’t say much more than that without falling into gushy, creepy fangirl territory, but just know this: in the time that’s passed since I closed this book, my feelings for it haven’t diminished. If anything, they grown bigger. And, in the case of my panties, wetter. TMI??
~ Review by Beth

Dear Megan Erickson – I had no idea I liked role playing (cosplay, if you will). Thank you for showing me the way. Love Forever, Shelly.

I’m not kidding – this book is so hot. There may or may not be permanent burn marks on my Kindle now. Please be warned – your panties are in DANGER while reading this book.

That said, it’s important that you know it’s not just a hot book. It’s sweet and swoony and adorably nerdy. Still reeling after a family tragedy, Chloe is so broken and closed down and afraid to put herself out into the world. Watching how Grant opens her back up is just beautiful; a delight to read.

Grant, himself, has stayed emotionally unattached from women since a one night stand in college left him with an unexpected bundle of joy. He’s drawn to Chloe though, first because he’s unable to ignore their intense chemistry, and then because he’s unable to resist her – the real her that she doesn’t want the world to see. Grant gives Chloe the support and courage that she needs to heal, and Chloe gives Grant a piece of his heart that he didn’t even realize was missing.

As always, Ms. Erickson nails the main story while also creating all kinds of magic in the background. I loved how all the different relationships were portrayed with a sense of authenticity, warmth, and humor. Father/daughter, brother/sister, and the genuine affection and camaraderie among friends – these things all combine to make this story richer and more robust. I walked away feeling like I loved everyone and maybe hoping there’s a book out there that will indulge my growing crush on Ethan. Just…sayin’.

In summary, you need this book in your life! GO! READ IT!
~ Review by Shelly 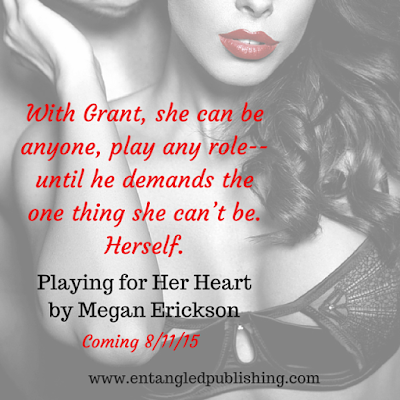 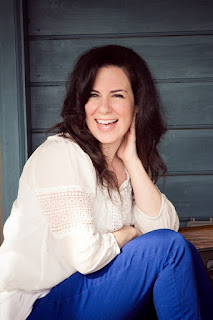 Megan worked as a journalist covering real-life dramas before she decided she liked writing her own endings better and switched to fiction.